In a prior post, I did a comparison chart between the Nike Fuelband and Fitbit. I looked at the features and benefits of each. I also compared the measurements that each provides in common: calories and steps. The only catch was that, last time, I wore each device on different wrists, which presumably created an imbalance. This month, I rectified and carried both devices on the same (dominant) hand. [NB The Fitbit actually allows for you to identify which is your dominant hand, while the Fuelband only asks about which wrist you will use in order to make the display readable.] Below are the results for the month of April. Clearly, as was shown in March, the fitbit is more sensitive to the steps taken and the average number of calories is closer to what an adult of my activity should be consuming.

Comparing with the results from the previous month where the Fitbit was taken from the left to right hand to join the Fuelband, it would seem that, in 30 days*, the results are completely out of whack. Looking at the Fuelband, which was always on the right hand, I consumed 2.7K more calories yet took 20K less steps.  Meanwhile, for the Fitbit, I took 50K more steps and consumed 4.5K more calories. The only notable difference in the month of April versus March was that I competed in a squash tournament one weekend. The results of those two days surely spiked, but I can tell you from the sore legs, that the following three days were very low!

[*I calculated only 30 days in the month of March]

In looking at the numbers above, I thought I would check out the ratios of steps to calories. One can observe contrasting trends. The number of steps taken to burn up a calorie decreased by 20% for Nike’s Fuelband while they increased by 12% for Fitbit. Most unsatisfying. What we can determine is that these devices probably have a long way to go to become more accurate. If I had to lay a wager, I think that Fitbit has a better accelerometer than Fuelband.

Future of Nike Fuelband at play 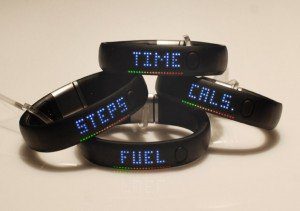 Nike has announced that it is disinvesting in the Nike+ Fuelband hardware. With 28 million members in its Nike+ Community, one has to believe that Nike will want to maintain the link to that vibrant base. Many journalists posit that Nike will surely be hooking with Apple which is preparing to get into the portable fitness devices (the iWatch). My friend Damien gave me his reading which was that Nike (in cahoots with Apple) wants to become the agnostic standard for fitness measurement, using its FUEL measurement across any and all devices. In essence, Nike wants to get out of the hardware business and focus on the software and the community. Probably makes sense if I were Nike. The Nike Fuelband certainly is lacking in ergonomy and user friendliness. I would argue that their software (accuracy) needs to be improved considerably as well. 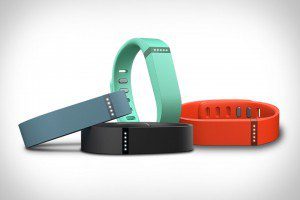 In one more improvement that the Fitbit software might provide: the ability to edit the sleep records. The number of times that I programmed the Fitbit at bedtime but forgot to stop when waking outnumbers the times I did it correctly. This obviously makes a mockery of the sleep data. If they are alert, hopefully, Fitbit will make the fix! [This month, to check another feature on the Fitbit, I am going to see if the fact that I incorrectly put the dominant hand can make any difference!]

There are now dozens of competitive options for the wearable fitness device. These take the form of items that can be attached to various parts of the body and have various different metrics that they track, with varying degrees of accuracy. Absolutely, these devices help keep people motivated to stay fit. However, the standalone fitness bracelet may be a thing of the past as Nike’s exit likely presages. Having the fitness monitor integrated into a device that one wears ordinarily would be far more convenient. Issues of accuracy, functionality, battery life and ergonomy mean that there is plenty of room for progress and innovation. I personally am keen to watch how this plays out.

How do you think the wearable fitness device market will evolve?