Who isn’t in pursuit of happiness? Would you not agree that Pharrell William’s song, “Happy,” is wonderfully a propos for our times? Launched in November 2013, it’s small surprise that Happy has sold over 7 million copies around the world and has a YouTube viewership of over 230 million at time of writing.

Surely, you won’t mind having to see it one more time?

Happy – In pursuit of happiness

Of course, it’s not like this is the first song to be call 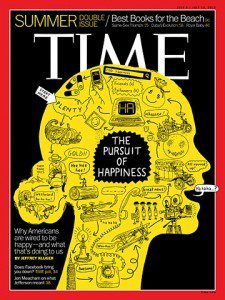 ed Happy. Between Happy Birthdays, Happy Hour to Happy Days with Fonzie and Happy Feet (the dancing penguin), or even Clinique’s Happy fragrance, the word and the feeling is a holiday moment each time we experience it. In July last year, Time magazine had “The Pursuit of Happiness” as its cover story. Happiness is indeed an indelible pursuit for me. Is it not the same for everyone? Yet, is it possible that the pursuit of happiness may be ingrained in certain cultures more and/or differently than others?

Happiness is a pure feeling. It’s personal and social. It is also fleeting, like being ‘in the flow.’ A genuine smile has a short lifespan. Even contagious giggles come to an end (and, in on a sordid, you can has even been recorded since ancient times: death by laughter). Happiness in life is a goal until itself. However, in the workspace, happiness is almost an anachronism. Many a corporation has no intention to seek the happiness of its employees. Satisfaction, fulfilment, recognition, promotion: yes. But, happiness: not really. In certain corporations and cultures, laughing itself is frowned upon as sign of latent inactivity, lack of concentration, superficiality… And yet, along with sleep, happiness is probably the biggest productivity booster of society. As the Time article suggests, happiness is intimately related to freedom and the search for improvement.

Being the digital geek, meanwhile, if Pharrell William’s song has hit such a nerve, I was wondering if it has anything to do with the proliferation of happy apps? Just on the iTunes store alone, there are 500 apps that show up when you search “happy” among the iPhone apps. It’s possible that 500 is the limit that iTunes imposes… so there may be even more?. Granted not all the apps listed are designed specifically to make you happy; but, they all want a piece of the happiness pie. In an Apigee study in 2013, 23% of people said that without apps, they “would be unable to be happy!” More recently, it dawned on me that there were a number of apps whose purpose was to promote, aid and assemble people around the happy theme. Here are the three apps that I have across, launched in the last year. 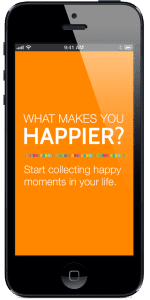 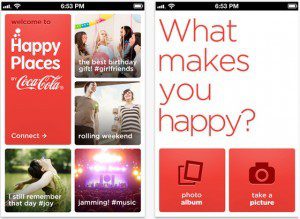 If social networks can help promote happiness in “real life,” could intranet or enterprise social networks ever have the same effect in the workplace? To-date, that doesn’t seem the case. There are some apps that are designed to spot or encourage engagement at work. A German project from Munich’s Technical University, Soma Analytics (a Netexplo award winner) provides a way to detect stress, burnout and depression at work. My friend Celica Thellier, co-founder of ChooseMyCompany, has created a series of applications designed to measure happiness at work (see: Happy at Work). Companies are more or less programmed to create happy customers. Coca-Cola is probably the best incarnation of that mode. However, too often, companies struggle to bring that objective and ambiance in-house. This underpins another strong conviction I have which is that, for an employee to develop a sustainable and regular level of happiness at work, the individual’s purpose must be aligned with a de facto higher mission that a company strives to achieve. {Tweet this!}

So, did Pharrell’s Happy song reflect, presage… or just surf on the happy trend? Anyway, if you care to track your ongoing happiness, you can use the Happy Barometer!

Here’s a thought for artists and marketers alike: could you find a clue or a queue for the next big hit by checking Google trends or the latest surge of apps in the various app stores?

Happy to have your feedback! Know of any other ‘happy’ applications?