Ok, so this year was supposed to be a BIG one for me. I hit the half century. Before you feel a need to send in belated birthday greetings, I insist that the purpose of this birthday post is merely to use it as a bellweather for social media! As I have done for the last several years, I have tabulated the wonderful birthday wishes as a way of charting what is going on in digital and social media. 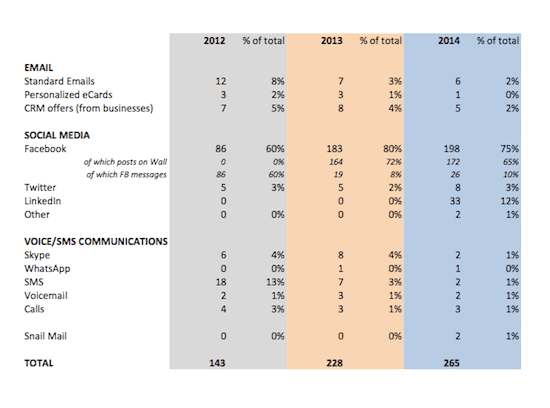 Getting social at LinkedIn?

This year, I would have hit a wall (not the Facebook Wall) had it not been for the sudden surge in LinkedIn birthday greetings. Other than LinkedIn, just because I reached the midway between 0 and 100, I didn’t see a huge spike in wishes. [It reminds me how inane it is for some brands who make marketing messages out of their own birthdays.] LinkedIn continues to mobilize itself to be part of the ongoing conversation.

Secondly, the CRM folks were clearly asleep at the wheel. I received a total of 5 birthday greetings from companies/brands, representing a drop off of nearly 40% from last year, my 49th birthday. The one that I liked the most this year was from the NHL: 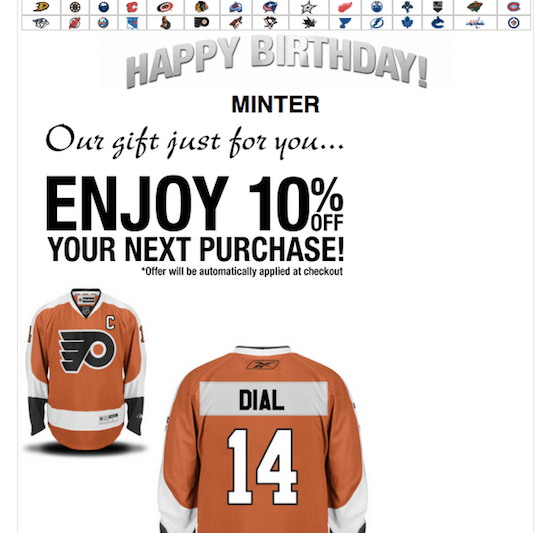 Nothing like rubbing the ego the right way with a big C and a personalized shirt. Quite surprisingly, however, none of the companies/brands recognized my landmark birthday. Instead, they prefered to send generic birthday messages. I say: missed opportunity! Perhaps some brands may not capture the birth year on purpose. But, I rarely have ever hid from my age (since turning 21).

Is a birthday, a birthday and always the same birthday?

We know that any serious CRM database has a data entry point for birthday dates. However, the real insight is that, for the vast majority of companies, all birthdays are typically treated the same. Should there not be a field that distinguishes between birthdays: that some birthdays ARE more important than others? Regrettably, I suspect that brands collectively consider a birthday as just another EXCUSE to communicate, as opposed to a bona fide moment to share with the customer, with an understanding of their context.

In one of the more tragic statements of online marketing, Klout (which has dubbed itself the “standard” of measuring online influence), gave me a two-point surge on my birthday. In all, I returned to a level of “Klout” that I had about a year ago, when they decided to adjust the scoring system (and my klout dropped overnight). In an indictment of Klout’s algorithm, how is it that I should gain two points because of a mass of birthday wishes. Are they suggesting that I should newsjack my own birthday to promote a blog post or challenge someone of greater importance to the ALS icebucket? In a conversation with its co-founder and several of the supporting staff a year ago, I suggested that the system enable coverage of online publications (even if it had to be self-reported). Instead, I find my “influence” growing merely because some 200+ people posted a birthday wish on my wall. Not very encouraging, really.

In reflecting on this “banner” year, I did think how marvelous it is to be able to receive messages from so many people, dotted around the world. I am grateful for the outpouring of messages. It’s always endearing — even more so when the message is a bit more personal. Note to self: make sure to spend a few more seconds to make a more meaningful message in my next wishes. 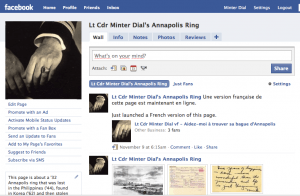 * If you have read this far and feel in the mood, there is one simple birthday wish I might ask for! It would be for you to go by the Facebook page in honor of my grandfather and other members of the Greatest Generation, after whom I was named, and like it, if you feel it merits your click.