The sector of transportation is just another in a long hit parade of sectors massively disrupted by technology. Looking at the taxi industry, in particular, the entrenched taxi base has been combating the Uber effect with various tactics and techniques and with varying degrees of success. 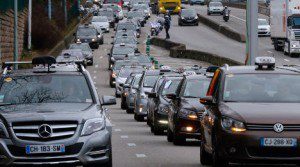 A major fan of Uber and Lyft services, I have experienced their charms and pitfalls. Most recently, in one of the more surprising encounters, my Uber driver in Paris invited me for a home-cooked couscous (and he even called me after the ride was completed to insist on the invitation). This is more like the Craigslist spirit and symptomatic of a more convivial service that seems to bond both sides of the equation, from whichever corner of the world you hail (literally). 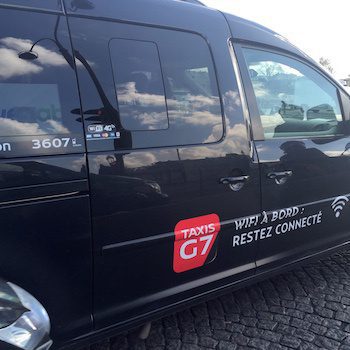 4G wifi on board and accepting credit cards…?

In Paris, meanwhile, I continue to use the taxi from time to time, even if only to check how the installed base is acting. How easily can a traditional taxi become a connected taxi network? The G7 taxi group, with 3,000 taxis nationally in France (compared to a total of 18,000 taxis ‘allowed’ in Paris), enjoys a rather embedded relationship with corporate France and is the dominant player in Paris. They now have their own specific G7 app that mimics the Uber app. They have segmented their offer and client types, including a WeCab taxi-sharing service to the airport, a Green Cab, a Maxi Cab (more pax) or an “international” VIP offer involving a partnership with (some) taxis in Brussels & Amsterdam. Some G7 taxis will even have a bottle of water to offer, too (much like UberX+). They have also said that the G7 taxis provide wifi and smartphone charging for their passengers.

The problem here is that it’s a classic case of running before you can walk. Head office and the plucky marketing team have reacted to Uber, which is the good news. The provision of wifi and charger in the cab is obviously their answer for a value-added services that might justify the higher pricing over Uber (along with access to the speedier taxi lanes to buck traffic). However, the marketing material has been printed and distributed before execution. So, in the cab I took recently, I was summarily given the cold shower when I eagerly asked for the wifi connection.

Sir, I don’t know what that is about. I don’t have any such thing in my cab yet.” 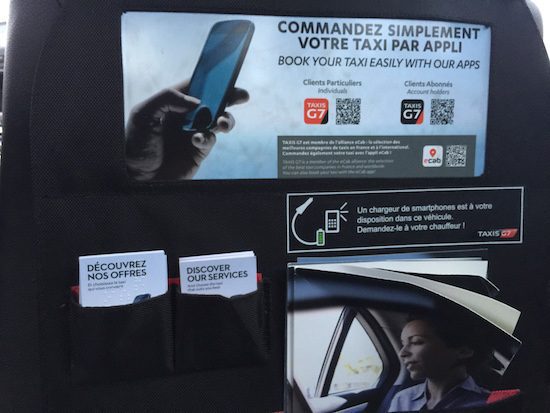 Promises of a connected taxi by G7

As for the charger, this particular only had the old (30-pin) iOS cable… If your marketing material invites the client to “discover our services” in the pamphlet, but not deliver them in real life, this is grossly misleading.

As for the G7 app, it is not exactly intuitive. For example, when you open the app up, a pop-up asks you if you already have an account. As this will always be the “first” time for first time users, it lays the seed: how do I create an account, right? When you tap on the Profile button on bottom right, it is not responsive. It turns out (when you read on their site), you can only create an account AFTER your first trip. 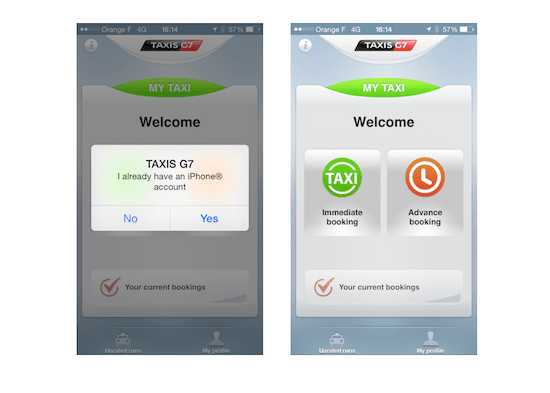 While the app does have a easy-to-use interface and some useful features (included advance booking and add to calendar), it also reinforces how/why so many taxis arrive with the meter reading an unacceptable 10+ euros before you even have stepped inside. As far as payment is concerned, you can’t add your credit card for automatic payment until you have booked your first ride.

If the Paris Taxi lobby has successfully managed to thwart the Uber Pop service, they have to contend with more than just Uber (no Lyft yet). There are some local start-ups, too, such as LeCab, which are offering differentiated services. Competition is undoubtedly necessary and healthy, to help shake up this overly entrenched service that, has for years, ridden literally on the coat-tails of an insalubrious monopoly. {Please tweet this out!}

Integrating people in the customer experience

When bringing technology into the business, there is a profound need to understand the user experience and the human involvement. Whether it is converting a traditional menu into an iPad in a restaurant, using digital devices and platforms in a retail store or offering wifi (in an office, hairdressing salon, bar or, even, in a taxi), companies must not underestimate the impact on the staff. Moreover, it is very advisable to deliver before you promise. In other words, you can trial and test it. You can go beta. You can experiment. But, don’t go advertising it before you know you can execute. In service, execution is everything. Trust is a currency. Abuse it with false promises and you will lose not just customer loyalty, but also employee engagement.

When it comes to customer experience, the role of the motivated and competent staff is pivotal. {Please tweet this out!}

Meanwhile, in the realm of other “reactions” to the Uber effect in Paris, the mayor’s office launched its version of the Uber app, Paris Taxi, last September with a couple of notable exceptions (for more read here):

As far as I am concerned, the app is buggy and is basically a 19th century version in terms of customer experience. Proof that creating a great user experience (UX) is not a gimme for everyone (much less when run by the government).