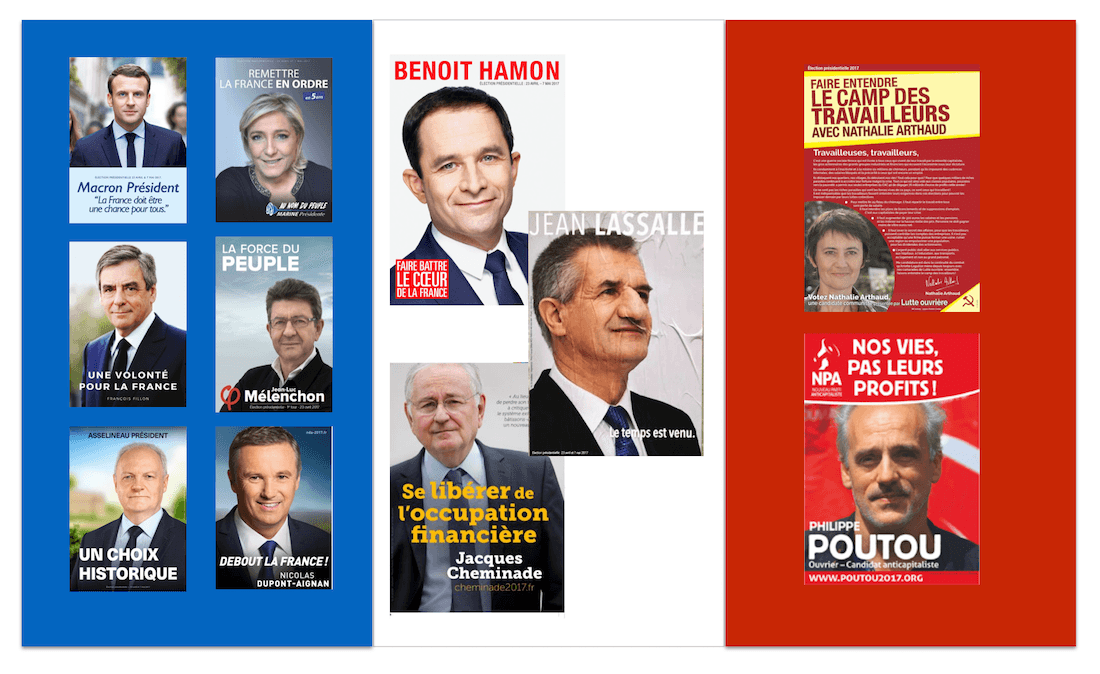 Round 1 of the French presidential elections was historic in one regard, in that it saw two non-mainstream candidates — Macron and Le Pen — get through to the final round (May 7). In other regards, however, it just felt like yet another French election campaign and result. And, I wonder if we will not end up with another five years much of the same, regardless. With my marketing eye, I tried to figure out how the marketing messages might have helped or hindered in this first round.

Above all else, one has to agree that the French presidential elections — with 11 candidates presented at the first round — are all about individual personalities, much more so than the political parties or even their programmes. In a strictly controlled environment where all 11 candidates are supposed to get exactly the same amount of media coverage, it’s inevitably hard for the electorate to really separate out who says what. So, I wanted to take a look at the marketing work done through the candidates’ posters that were constantly displayed together in batches of 11. See here a short description of each of the candidates.

Marketing via the poster

Just by looking at them, is there one that attracts your eye most? Typically, I’d have to believe it’s the bright red Poitou. But is there anything else that strikes you about these 11 (put in the order 1 to 11 that was prescribed by the official draw)? There was one thing that really struck me.

Yes, I looked at those who chose to look left or right or straight on and who was consistent in that regard. I also looked at the de rigueur blue tie (or none). But, the big thing for me was that, of the 11, only 3 offered a proper smile. The other 8 have a neutral or stern look. Not exactly winners of the charisma awards. Of course, the Presidency is a serious position to be vying for, but it’s as if the requisite grumpy passport photo (an obligation in France) was used. Only Mélenchon decided to show us that he needs his glasses!

In terms of aligning their message with the French tricolour flag, there were two bona fide leftists in red (Trotskyist, anti-capitalist). Three chose a plain white background, but the majority (six) took to the “reassuring” blue background, including the firebrand candidate, Jean-Luc Mélenchon, who was backed by the Communist Party. Both Le Pen and Dupont-Aignan (Stand Up France) used a left-to-right graduated blue background, moving toward a somber/stormy right. Mélenchon decided to use a cloudy graduated background (bottom-to-top).

With five of the 11 candidates having presented themselves in the 2012 elections, you would have thought these might have improved with experience. But, in reality, most of these candidates know from the beginning that theirs is a lost cause, just a way to pollute and/or dilute the airwaves for the main candidates. The bottom seven candidates (including the “major” Socialist Party) pulled in a grand total of 15.1% of the first round vote.

Following the ‘prescribed’ order above in the first image, and maintaining the punctuation, the eleven candidates squared off in an attempt to own a space in a crowded field. Five decided to keep the word France in their slogan. Two of the slogans (The time has come and A historic choice) astonishingly say absolutely nothing. Five of the slogans convey energy or strength. The far left targeted the business/financial world. 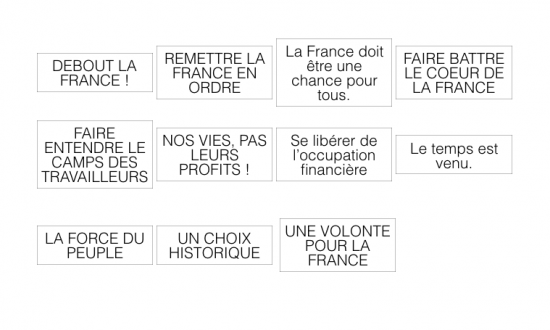 Overall, I was left to feel perplexed by the communication choices and messages. How does one make head or tail or the choices? Clearly the centrist Macron managed to capture the middle road in all aspects. His slogan was an all inclusive: France must be a chance/opportunity for all. It was also the longest.

Running Down The Middle – Please Everyone?

Noting that his movement was called En Marche (aka Move Ahead), Emmanuel Macron who obviously embodies it all, will have a titanesque challenge to rally the country (much less the legislative body) behind him, bridge the hefty cleavages and manage real change without breaking rank with both the right and left that surround him and without whose support he will go nowhere. Is it possible to run down the middle, attempting to placate everyone and yet get something accomplished? Let’s just, first, make sure he gets past the next hurdle on May 7. Then rendez vous in 2022.

Your reactions and predictions?