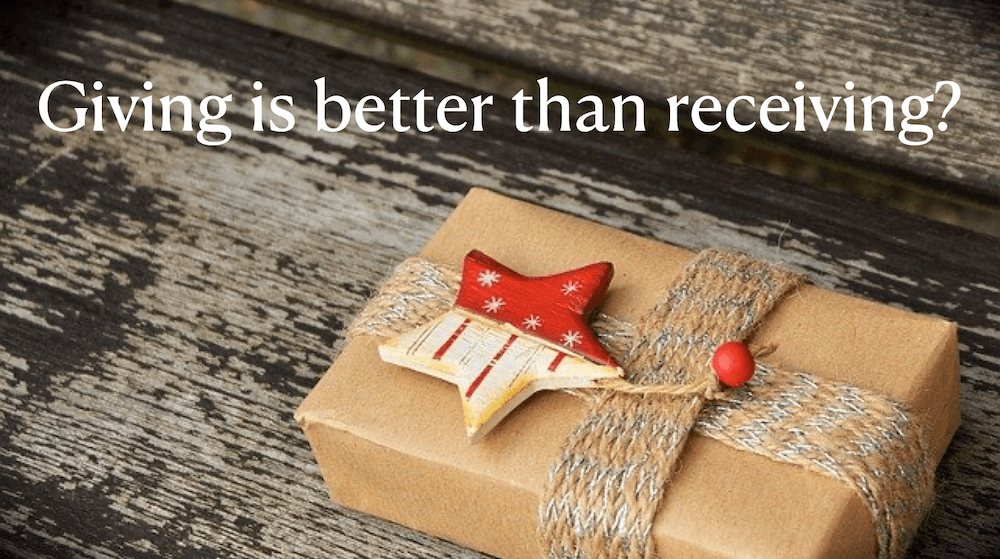 As a kid, I remember the thrill of receiving presents. The anticipation and surprise at opening the wrapped gifts lying there until Christmas Day. I loved receiving.

Not that I mind receiving gifts, but those days seem to be behind me. And that’s a good thing on so many levels.

There’s fascinating research, conducted by a team of neuroscientists in Brazil, that shows that when volunteers donated money to charities, their brains showed the same patterns as when they received money. At some level, this speaks to the idea of reciprocity. Reciprocity speaks to fairness. But the world isn’t always fair and we can easily be stuck in a prisoner’s dilemma.

As I discovered in reading How to Have a Good Day, by Caroline Webb, a team from UBC and Harvard found that “spending money on other people makes us happier than spending money on ourselves.”[Currency, Penguin, 2016, p280] And I believe this speaks more to the idea of giving without expecting in return.

I feel better about myself and about life in general when I can give. It can be from feeling useful in providing advice. There’s pleasure in seeing a thoughtful gift being opened by the receiver.

It’s different, though, when the ‘gift’ isn’t a much desired set of woollen gloves for the oncoming winter, but is something that isn’t wanted, yet may be needed. At a more delicate level, it’s sooooo much easier to give feedback and criticism than it is to receive such. But, as they say, feedback is a gift. It’s how you receive it that counts.

In my new book, You Lead, I talk about the power of karma. Not the version that says Life’s a Bitch. Nor merely the idea that what goes around comes around. The power of karma lies in the action you take and the intention you have behind it. But first, in order better to gauge the usefulness and the appropriateness of your actions, it’s a good idea to flex your empathic muscle. Not all gifts are well received. Some people don’t want compassion or, worse, pity. Not all criticism feels constructive. Not all gifts are presents. For example, a feeling reciprocity can quickly become a burden.

Yes, giving is better than taking. And, yet, giving isn’t always easy. As the research by Adam Grant, a psychologist from UPenn [and author of Give and Take] established, people who are just “takers” don’t make the giver feel good.

In a world that is deeply troubled, with so many people suffering hardships, ebbs in energy and swings in mental health, maybe the biggest gift we can all give is an ear. An ear to listen. And it should be listening that doesn’t necessarily come with solutions or help. If you can just give some of your time, the most precious resource any of us have, that’s a much more pleasurable gift to receive.

It’s no wonder the word ‘present’ has a double entendre, no?

If you’re feeling low in energy, as Webb highlights, look to do unsolicited acts of kindness, such as an impromptu compliment, thanks or helping hand. I was touched by Johann Hari’s book, Lost Connections, and the power of reconnecting with yourself, with strangers, nature, and even long-lost friends and family.

When you give, don’t expect anything in return. Come with good intentions and without an agenda. That’s when the magic occurs. That’s when you build up your karmic capital.