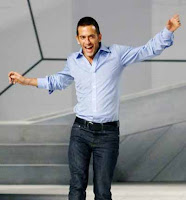 For the latest fashion week in New York, the standout performance has been the pre- and post- tangle surrounding the Marc Jacobs Collection, shown on September 10th. Among other things, I was very impressed by the use of SMS by Jacobs’ Press team to alert [certain VIP] attendees to the retard.

Jacobs’ show was scheduled for 20h30 (8:30pm). An SMS sent out to attendees said the show would be an hour late and to come around 22h (already quite an exaggerated sense of an hour). A second SMS was issued at 21h45, saying the show wouldn’t begin before 23h (11pm). 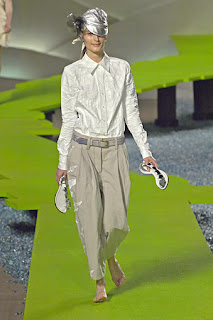 Per the press reports, Anna Wintours (Vogue) and Suzy Menkes (IHT) both thought the retard stepped over the bounds of acceptable. Here’s the report from WWD. Menkes reportedly said, “I would like to murder him with my bare hands and never see another Marc Jacobs show as long as I live. Where’s the dinner?” Fashion Shows that start on time are such a rarity, you wonder why the agenda proposes a specific minute for the beginning. Why not write: sometime after x pm or not before y pm. New concepts in time management are needed, such as obligatory SMS messaging and pre-show massaging…

There is a historic need for suspense, generating impatience and a stir crazy audience, with ants-in-the-[hot]pants is a modus operandus. This is typically not helped by chairs at fashion shows which are made temporarily for temporary seating. Some fashion designers seem to behave along the lines, “the longer the wait, the bigger rap; and the more hype my show will create.”

Anyway, Jacobs sparred with the powers that be post show (in the press), defying the likes of Menkes and Wintours, and telling them not to come ‘next time.’ Maybe, though, the time after that will be okay?

With all that said–and while I didn’t attend the show–with my Lit background, I can only say that I was extremely interested in the deconstructionist theme to Jacobs’ show, played back to front. Sounded absolutely fascinating. A finale at the beginning (including Jacob’s enthusiastic bow), 3/4 finished dresses, undersized shoes and again shoes with the heels attached to the front. For music, the show was accompanied by non-linear cuts of Ravel’s Boléro. There was a blow by blow writeup in USA Today Blog. Unfortunately, the show may have been missing in content (per le Figaro); but then what’s new for those who don’t like Derridan deconstructionism. Otherwise, seems like Jacobs’ show did its very own auto-destructionism.