The Beijing 2008 Olympics have come to an end today Sunday, August 24th. It is hard to imagine that 303 events are crammed into the past 15 days. The kick-off and finale were works of art (if well ‘orchestrated’ in the most generous of terms). And, true to form, China hauled in the largest number of gold medals (51), followed by the USA (36), unaccustomed to playing second fiddle. Aside from chronicling the winning countries in this post, I have chosen to analyse the results according to population. There are many striking facts to these results — the best of which I will attempt to highlight.

Herewith the Top 20 winners, ranked by number of golds. The standout performance after the Chinese clearly belongs to Great Britain with 19 golds. 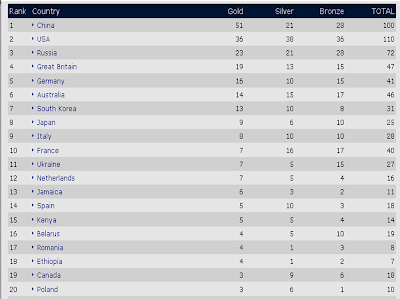 I choose a second table below to demonstrate the number of medals won per population member (a medal per pop measurement). In the below chart, I have taken the Top 30 (this time), ranked by the most medals from the smallest pool of people. The chart shows the total number of medals won (2nd column), the ranking according to the total number of medals G/S/B (3rd col), followed by the percentage of golds won out of the country’s total medals. Finally, I cite the country’s 2008 population (according to the US Census Bureau). In the last column, you have the population divided by the number of medals, showing — by some way of voodoo statistics — the pool of people that ‘created’ the winners. The Bahamas (2 medals) take the honours here with 1 medal per 153,000 citizens, followed by the miraculous Usain Bolt’s Jamaica (11 medals) and then Iceland (1 medal) taking the bronze place (considering its tiny population). Slovenia, Australia (6th place overall in the total medals haul as well) and New Zealand round out the top 6. Of the top medal scorers in the table above, GB scrapes in at 26th with 1 medal per 1.3 million citizens. And, for another viewpoint, the non-medalling countries with the largest population (a sort of hall of shame, if it weren’t for the political and social strife):

And among the major upsets that I observed from a US standpoint anyway, the US getting only a bronze in baseball and having both the US men and women failing to qualify for the 4x100m. There were many others certainly. However, aside from having a war begin and end within the timeframe of the Olympics (with Russia’s invading Georgia’s [30 medals] South Ossetia and Abkhazia) and China’s internal silencing and manipulated PR campaign, the largest other surprise that I can come up with is the low level of doping scandals. Lo siento Rafa, but Nadal escaped again… along with surely many hundred’s of others.

All in all, a fairly vivid affair. And, for the foreign companies that invested in advertising to the Chinese, presumably a winning gamble. Your thoughts?