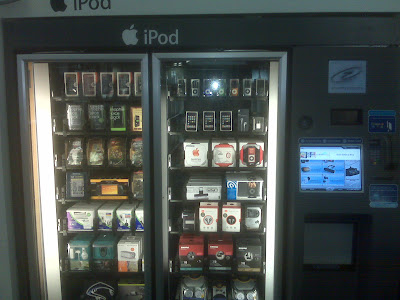 At Las Vegas McCarran Airport, I found this kiosk selling a number of Apple goods. It was a peculiar site, the logo atop being the little Apple of my eye, caught my attention. While Apple has seemingly established these vending machines in many airports (I have read about kiosks at JFK, DFW, Atlanta, SFO, Indianapolis…) and some train stations, this was the first time I had seen one up close. Apparently, these kiosks have been in place for a couple of years. As far as Apple shopping experiences go, aside from the large touchscreen interface, it is quite minimalist. The kiosk was more or less off the beaten path. A couple of the items were not available (cardboard replacements — which may have been to avoid having the item ‘drop’ into the bucket).

What would prompt a last-minute, self-service purchase of an iPod just before getting on board? Without access to music, there is no way to load the iPod easily for the flight. A really cool idea would be to have the iPod preloaded with the latest songs, no? That said, there were some useful accessories (i.e. earphones, plugs, adapters and the 22nd century MY.VU personal media player) that could lure the odd gambler’s winning purse.

As we all know, as loosey-goosey as their Job-less culture goes, Apple has a very strict policy of distribution. I wonder how the corporate decision making process went to put this in place. I would be curious to see what is the ROI on such a salesperson-less outlet?