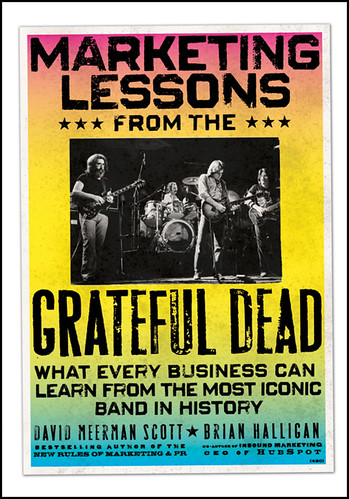 A book I wish I had written!

“Marketing Lessons from the Grateful Dead” (Amazon).  Talk about a book that I wish I had written.  As a long time fan of the Dead (“Deadhead”) and a travelling businessman, I feel like my involvement with the Dead very much had a positive impact on the way I conceived of marketing and client relations.  Albeit, I never truly made the connection.  I have a sneaking suspicion that fellow Dead fan, Steve Jobs over at Grateful Apple, may have.  Written by David Meerman Scott and Brian Halligan (CEO of HubSpot), “Marketing Lessons from the Grateful Dead” picks out all the great and unorthodox methods that the Grateful Dead used (more or less intentionally, one has to believe) to build up their franchise.  It is, to quote Robert Hunter (the Dead’s lyricist), one of the greatest stories ever told!

What is it about the Grateful Dead that made them so great?  Well, as expressed by their name, as a fan you always felt that THEY were grateful for your support and subscription to their road show.  As opposed to so many other ‘big time’ artists or bands, the Dead showed up day in and day out regardless of their level of fatigue or state of mind.

In terms of a product, they did not follow the traditional model for musicians whereby the record label drives the story and the record sales drive the profits.  Au contraire, the Dead mockingly recorded albums according to their contract and allowed the fans to record and share their concerts at will.  The core experience (and business model) was the concert; and every concert (all 2,318 of them) was an unique experience in which fans just had to partake.  Moreover, the members of the band would each go off and do their own gigs on the side to pursue the experience (Jerry Garcia did about 1,000 more shows with his Jerry Garcia Band with very much the same attitude and concert experience).

Sales of tickets, as documented in the book, were managed by the Dead, not systematically outsourced to some impersonal ticketing agency (albeit Ticketmaster was used as well).  Once tickets were surreptitiously (and unceremoniously) put on sale, fans would send in their orders with magnificently hand-decorated, glow-in-the-dark envelopes in order to capture the attention of (and a smile from) the ticket distributors.

The notion of building a community was practically inbuilt in everything the Dead did and the fans voluntarily participated.

For some who read this blog regularly, you will know that I have been writing about the 5 E’s of the new marketing paradigm.  The Dead executed, perhaps unwittingly, but certainly ahead of its time, a perfect 5E programme.

Engagement – The Dead were committed, performing on average more than 80 concerts every year (other than 1975) between their founding in 1965 and 1995 when their lead singer, Jerry Garcia died.

Exchange – Rather than using middlemen, the Dead did their own ticket distribution.  On the back of their 1971 album, Skull & Roses, the band asked their fans who they were.  ‘Tell us where you are, and we’ll keep you informed.’ By the end, the Dead had a mailing list with a half-a-million people on it.   Unsurprisingly, every concert was sold out.  Just imagine what they might have done with the social media.  [In 2010, the main GD Facebook fan page has well over 600,000 members and 30 different applications.]  Every time they played live, they fed off their audience, exchanging via the cadence of their music.

Emotion –  The Dead were passionate and inspired a passionate following, to say the least.  The dancing bears logo will bring a smile to the faces of the Deadheads (fans).  As one Dead song states, “nothing left to do, but smile, smile, smile.”  (Lyrics from He’s Gone – this from a show in Copenhagen, Denmark 1975).

Experience –  As we liked to say, “a Grateful Dead show was not a concert, it was an experience.”  With 501 different songs (of which 184 were original songs) in their concert repertoire, every show was unique in its composition and its delivery.  The Dead shows very much had a before (the road trip and arriving in the parking lot), during and after (back in the parking lot and readying for the next show) — a total and immersive experience.

Essence – Music by itself is the essence of life, encouraging movement, celebration and sharing.  More to the point, the Dead did plenty of “cause marketing,” as part of their Haight Ashbury 1960s culture.  A couple of examples: The Unbroken Chain Foundation (clean drinking water for developing nations).  And, in the 1992 Olympics, the Dead helped out the Lithuanian national basketball team which wound up winning the bronze medal (they wore tie-dyed shirts on the podium in recognition).  The Dead were consistent and fully congruent with their mission.  The concerts were the lifeblood for their fans, literally.  And the Dead lived that way to the end…. and, for the surviving members, the meaning and experience remains at the core of their philosophy.