In the “old” world, we were in a push environment.  The only thing that counted was the product.  The battle was for share of shelf space in a confrontation between distributor and brand.  And, in on the television, we had (especially in countries like France) the rigid 8pm news (“journal de 20 heures”) or the equivalent prime time news (as in the US).

Of course, in the “old, old world,” if we move back before the 18th century, we were in a community-based commerce where local product was on offer and where word of mouth was probably the strongest marketing tool available.  But, that sounds oddly like today, no?

Today, we see that marketing and media, in general, have undergone a tidal wave as we move toward true pull (undertow?) marketing, community-based, meaningful relationship building, fighting for share of mind and Facebook “likes” on a myriad of distribution platforms.  Under the wave, to a certain degree, the old fashioned marketing tools and old school mainstream media channels have taken a real washing.

Watching the evening news the other night, in a throwback to the old days, I was struck that none of the news concerned old news.  In fact, all the channel fed us was the new news.  For some, that may seem normal.  Not for me.  First, I find the news barely interesting.  The curious part is that the news is never complete.  It is just a snapshot in a point in time.  Is there no news worthiness in followup?  For example, what ever happened months/years later to that victim of such and such a crime?  Was the money of a bank heist ever recuperated?…  Of course, sometimes, there are saga (like the Woerth/Bettencourt/L’Oreal story) that keep coming back like a broken record.  But, for the most part, news is easy come, easy go.  You are left hanging.

Taking a marketing parallel to this notion, I think that too many companies keep spewing out a deluge of new products — more or less meaningful for that matter — and do not successfully allow the product to mature.  While innovation is absolutely the lifeblood of companies, the very notion of NEW is taking on a new meaning for consumers.  NEW means lots of investment, hype (if not hyperbole), replacement of OLD (increased garbage), yelling and shouting.  And while the companies are proudly brandishing the latest novelty, the prior new product gets left in the dust.  One perfect counter example of this is Apple, which launches sparingly, but brilliantly.  They give a new product a huge PRE-launch existence (PR, hype and buildup) and, because there is a healthy gap between iterations, you get to live with your NEW item for a while.  Brand marketers then need to figure out how to deepen and broaden the launch, building up accessory and merchandising add-ons and dollars, etc. 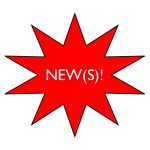 I believe that news media could find mileage from authentically re-honing news to include more full-cycle stories, adding in more education and meaningful stories.  I see some strides when I listen to ABC with Diane Sawyer.  I think NEWS can thus gain another sense of value and viewership.   Similarly, marketing teams would do well to learn the much more arduous task of how to grow the new products they launch and to foster a longer term relationship with their clients rather than rely solely on the value of NEW to drive top line sales.  Turning one’s products into a media is not necessarily possible for all, but certainly merits being highlighted as part of the Apple strategy.  In any event, by focusing on building relationships rather than “spewing new” every month, brands may find better success in marking their territory.  Thus, marketers will be able to move from friend’s liking them to fans loving them. The real marketing of marques!