If you are interested in digital marketing and/or social media marketing, and you have not heard of Empire Avenue, then I think you need to know about it.

Now that I have become (drum roll) a Vice President (top 5%) on Empire Avenue, in the social networking category, I feel I am empowered to write it up.

Started as an invitation-only site in February 2010 and then went public in July 2010, Empire Avenue is a cross between a game, a social media network and a way to measure online influence (i.e. in social media, very much like Klout or Hubspot’s Grader).  In effect, it’s structured like a stock exchange, where the value of your “stock” is based on the social media activity and influence in your network.

Tricks to the Trade

There are two ways to “play” the game.  In other words, your value can go up via two different channels. 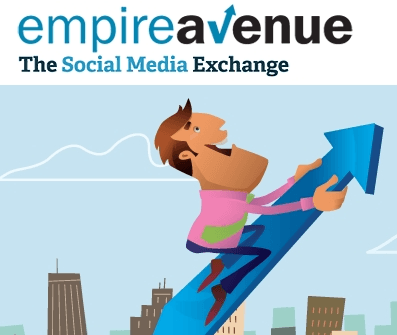 Climbing your Social Media Net Worth

The game tracks all your investments and also allows for steady interaction with the other players.  I have slowly begun to interact with other like minded individuals and have found the experience rather enjoyable.  There is all sorts of dealmaking going on.  And, according to your activity, you can win vapid awards and promotions, as well as some extra Eaves (game cash).  There are several strategies that seem to be emerging, for example, mutual investing, regular social activity.  But, it is still in its early days and I think the sooner you get in, the more likely you are to get basement prices.  If the game takes off, then all the “early adopters” will gain big time.

Empire Avenue, which is a startup out of Edmonton (Canada), is just now beginning to pick up steam in more mass manner.  I don’t think it has hit any tipping point yet, but once the mass media gets a hold of it, I have no doubt that it will start booming.  For now, it is only in English.  Personally, I think it is great and I would not be surprised if, in 12 months, this game will be all the rage for a broader population.  AND, like all social media, better to consider it as a longer-term play if you want to get the most out of it!  Who knows, maybe these eaves will turn into a pot of gold (wishful thinking).  Come and play and tell us your thoughts.

Certainly, I hope you will consider joining.  And, at current prices (43.83 eaves as of May 23 2011), I believe that I am good value!  My stock price is generally (83%) driven by my social media activity, with the remainder from my stock pricing prowess.  My ticker is MDIAL and the recent trends have been good.  Plus, I give out a decent dividend.