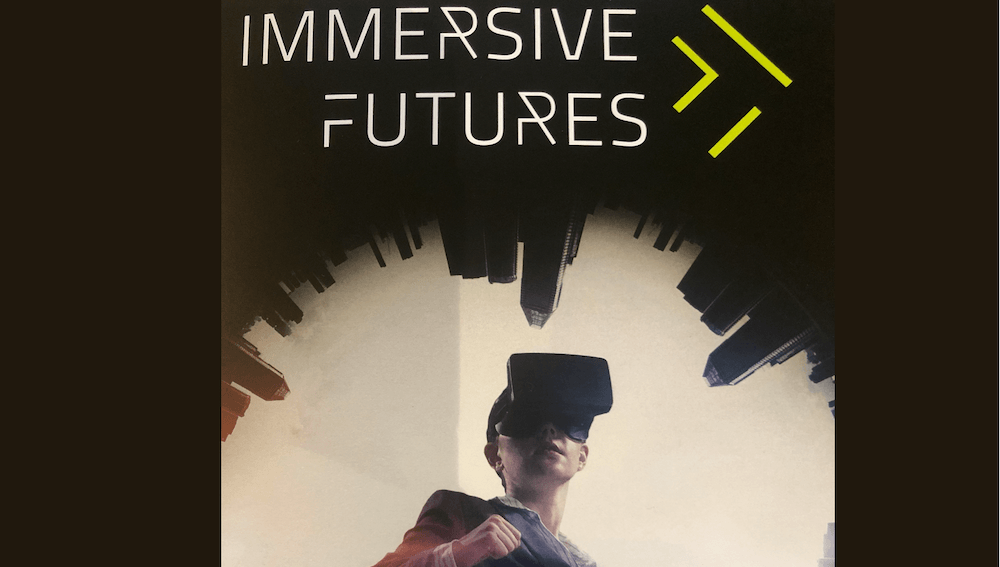 I attended the “Immersive Futures” thought leadership event,* hosted by The Department at the h Club in London a couple of weeks ago. A crammed full house was on hand, with a broad swath of attendees, many of whom are in the immersive tech and gaming worlds. Immersion as a concept is spreading into many different walks of life and business, including for news, education, entertainment, retail and tourism. In conversing with my neighbour (lead actor of the Immersive Gatsby, with more on that play below), one question struck me as important to resolve:

What does immersive mean?

When we’re talking digital versus analogue, we’re seemingly worlds apart on what we might call immersive. Using digital tools, one could quickly conclude that “Virtual Reality” is immersive. The Google prompt in my search bar on virtual reality (VR) leads to the immersive experience in second position:

Immersion using Virtual Reality is credible because of the 360 degree visual and aural effect. You can be plunged into the middle of a Syrian refugee camp, swim among sharks or fly like a bird. You are able to turn around and see what’s behind, below and above you. As such, depending on the scenario, there can be kinetic movement, sight, touch and sound. There are some rudimentary VR experiences that include voice recognition software too (e.g. for simulating interviews). There’s definitely a level of neurofeedback approaching how your brain might function in real life. Applications of VR abound in gaming and for educational purposes. But, seldom is the immersion so complete you forget you’re standing in a pedestrian setting with a mask strapped on your head. The analogue reality is never that far.

Is or should immersion be considered differently whether it’s analogue or digital? I don’t believe so. But for the sake of setting a standard, for a digital experience to qualify as immersive, I have come to the conclusion that a digital immersion should involve at least four of our seven senses in a complete manner. For now, full digital interactivity and immersion requires more work, including in terms of personalized experiential storytelling. It seems that voice and the articulation of conversation may be the new frontier for the complete digitally immersed experience.

In the realm of mixed reality experiences, where a combination of digital tools and analogue elements are used together, I invoke the rather magical experience at SOMNAI (run by Andrew McGuinness of Dot Dot Dot London who was a guest on my podcast). Somnai, which was orchestrated in a large warehouse in Shoreditch London, was a live experience at scale, using both real life and digital tools to make for an immersive — read alternative — experience. The tools included Augmented Reality, Virtual Reality, film, sound, smell and touch in a variety of physical settings. At the end, they invited participants for a drink and a real-live conversation among the other attendees. It made for a compelling experience. Dot Dot runs different layered immersive experiences in London that I’d invite you to check out!

So, if digital tools are striving toward simulating real world immersion, they’re definitely not all the way there yet. If you look at the analogue immersion that comes with attending the Immersive Gatsby play, as an attendee, it is far more complete. You are involved in the play and participate in a full body manner. You are using all your senses, including making sense and participating in the evening’s performance. You talk to the actors in situ, breaking through the proverbial fourth wall. You can actually be touched and dance with the cast. As much of the play happens in a bar in the 1920s in Brooklyn, you also walk around with a real drink in your hand. In such an event, you are using all your senses. Moreover, the digital tools are banished.

Tourism is an area that often promises analogue immersion. In the realm of an immersive travel experience, you can literally and physically be submerged in water over your head, which surely provides a full experience. But the de facto need in touristic immersion is to be placed in a universe other than the one you habitually inhabit. In other words, the immersive notion lends itself to alternative experiences. As a sign of the trend, Thrillist recently announced that it is offering “immersive trips for intellectually curious and adventurous global travellers.” Of course, when you want to learn to speak a new language, one concept is duly labelled as language immersion. I’d also note another form of analogue immersion: date a person from that foreign country.

Then there is the Secret Cinema immersive concept whereby parts of the celluloid experience are made to come alive in flesh and bones in front of the audience. It’s more like ‘cinetheatrics.’ Their slogan is “Enter the story. Live the story. Be the story.” Admittedly, I should allow that cinema involves technology, so it’s not pure analogue.

Another truly immersive “live” experience was eating in an entirely blacked out restaurant. For me, my indoctrination was in Paris at a restaurant called Dans Le Noir, where I ate with my wife, a couple of friends and a host of strangers without being able to see the nose on my face. In that setting, an entire portfolio of senses was under siege: taste, smell, hearing, touch and sight (or lack thereof). Even my sense of balance was put into doubt through the lack of regular landmarks.

Something I’ve observed about attending an immersive play is that it seems de facto to mean that different members of the audience will have different experiences. The Immersive Gatsby had the ‘main show’ in the bar room and then plenty of small side-shows in hidden alcoves in the corners. It felt very special to be in a side-room, because you were completely disconnected from what’s going on for everyone else. One way to gauge immersivity is to what extent your smartphone can capture the experience? At Immersive Gatsby, not only are digital devices banned, I never even felt the urge to take out my phone because there was no way that my device could capture the 360º surround-sound effect. Only at the end, did my son and I wish to commemorate the memorable evening with an inevitable in situ selfie. If you’re in London (though it’s on the road around the world it seems, too), I certainly recommend seeing Immersive Gatsby that’s running through the end of July 2020. One last serendipitous element: now we’re back to the roaring twenties for real!

How would you define immersive? How interesting is immersion as a new form of entertainment or brand engagement? Please do share your thoughts!