You are your ( social ) network

The case of Noah Kravitz has hit front page and, rightly so.  If you haven’t heard about it, you should read this article in the New York Times.  In short, Noah Kravitz is being sued for damages – to the tune of $340,000 — by his former employer, PhoneDog Media, for leaving the company and “keeping” his 17,000 followers on Twitter.  The $340K is justified based on a rate of $2.50 per follower per month.  The question is who owns the 17,000 followers of Noah’s [Twitter] Ark?  On the one hand, at the request of the company, Noah managed to create an account that legitimately attracted so many followers (note that he achieved those followers without a follow-you-back strategy, since he only follows a couple of hundred people).  With the current mass media followup (New York Times, CNN, L’Expansion…), Noah has gained another 7K followers.  Hum, I wonder if PhoneDog would not like to go after those as well!  At stake is the setting of precedence on the value of a follower as well as the potential encroachment of who owns your network.

I have written about this whole issue in the past.  And, I find the problem posed extremely relevant for the new management myndset.  There are certain black & white instances where a company account and its followers/fans belong outright to the brand.  A brand’s Facebook page is a good example.   However, in the case of social networks which are nominative, there is distinctly more grey matter.  For example, a community manager for a Facebook page may end up, if he/she does a great job, with many clients also asking to “friend” on their personal page.  It would be highly awkward for a company to state whether or not the individual should accept a friend request.  Unlike other traditional marketing efforts (ad campaign, poster…), the power of the social media marketing is that it has returned the individual to the center of the puzzle.

You’re as good as the company you keep 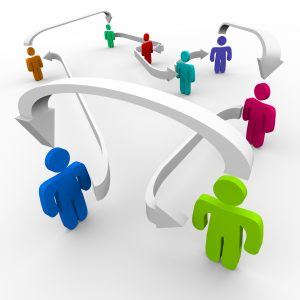 Who you know, counts.

Whereas in the past, the notion that you are as strong as your network may have been true, but not visible, the visibility of your network (colleagues, friends, fans & followers) on the web has changed the parameters.  My great grandmother passed along to my father the saying that you are as good as the company you keep.  My father passed it along to me and I have been living that maxim to the fullest.  Individuals set all sorts of different filters and qualifications as to the friends they choose to “accept” or to follow or to follow back.  This lawsuit — which presumably has a number of subplots — will make corporations wake up to the power of the individual social media expert within its walls.

Your company is as good as the employees it keeps

Now, in a little twist, but equally true, your company is as good as the employees it keeps.  As management, HR and their legal counsel, weigh the alternatives — including possibly cracking down on individual Twitter accounts and the like — here are some thoughts that they might want to ponder before rushing off to change their social media guidelines and policy:

The strength of a Twitter account relies on the individual(s) that are behind the handle.  Just as branding must get more personal in this internet-connected world, managing a Twitter account needs to be considered personally.  One’s Twitter account should be considered a part of one’s own personal eReputation.  I have no idea as to the legitimacy of the claims made by PhoneDog and there are presumably elements to the case that would make any judgment rash on my part.  It appears that Noah left on “good terms,” but that seems circumspect under the current circumstances.  That said, the main points to retain from this case are that:

It is just like wanting to confiscate the contact list in your address book (the old Rolodex).  If anything, HR teams — especially for consumer brands — should be welcoming individuals who can rack up large number of loyal followers.  Finding and retaining the good staff is the real issue.