With Facebook now a publicly traded company, brands in some kind of perpetual disarray and consumers still not trusting marketers, the question occurred to me: is Facebook trying to be all things to all people: Earned, Owned and Paid media?

A dance between brand, user and media

When you want to be all things to all people, you typically end up with nothing.  In this vein, I am going to wager that the overlapping nature of earned, owned and paid media could end up making Facebook a perilous existence.  There is no doubt that Facebook is at the heart of shared or earned media: we, the users, are indeed media.  Facebook is obviously now going gung-ho on paid media, to monetize its billion users and to recapture the wallets of Wall Street.

As in the diagram below, the consumers “own” the earned media.  The Brands are the ones paying the social media companies, so they might believe their Facebook page is their own page.   In the middle, you have Facebook and company who are trying to manage their own brand, pulled one way by the brands and pushing the other way to protect its user base. 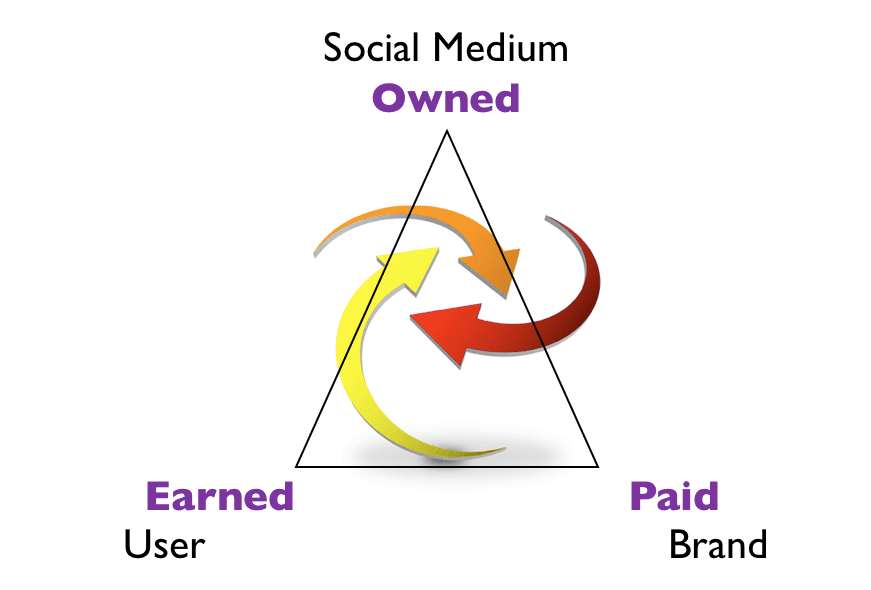 The real question is whether a brand can consider its own page as owned media.  In one of Mitch Joel’s latest podcasts with Rebecca Lieb of Altimeter, Rebecca stated that a brand’s Facebook page is “owned” media.  I disagree.  At this point, a brand does not need to pay for its page.  Aside from the bleedingly obvious way for Facebook to get some extra revenues, the reason they have not done so yet, I believe, is to retain authority over the pages.  Until brands have to pay for their real estate, I think it is not appropriate to call one’s Facebook page “owned” media.  Facebook continues to have the right to make unannounced changes and the users (“friends”) still have the right (according to the settings) to participate freely on the page. One thing is for sure, in my mind, is that as Facebook inevitably wilts to the pressure to monetize, consumers will tend to unlike very quickly.  It will be a tricky line to tow.