You are your network

With most of these social media networks, you can scope out who knows who with great ease.  When you are on Facebook, it’s awfully fun (scary?) to see whom among your friends knows each other.  But, on a whole other level, I think it’s a different ball game when you can tell which values your friends hold.  For example, when it comes to politics — a topic that one is not supposed to raise at polite dinner tables — you can now see with a great deal of transparency who stands where.  With the latest Presidential Elections, it was estimated that 12% of the campaign funds were invested in the digital space.  Anyone saying that digital media did not have an impact on the latest US political elections should be reviewed.   Here’s a look into why:

When you next log into Facebook, go take a look at what shows up when you go to Barack Obama’s page.  You can view below what happened to me: 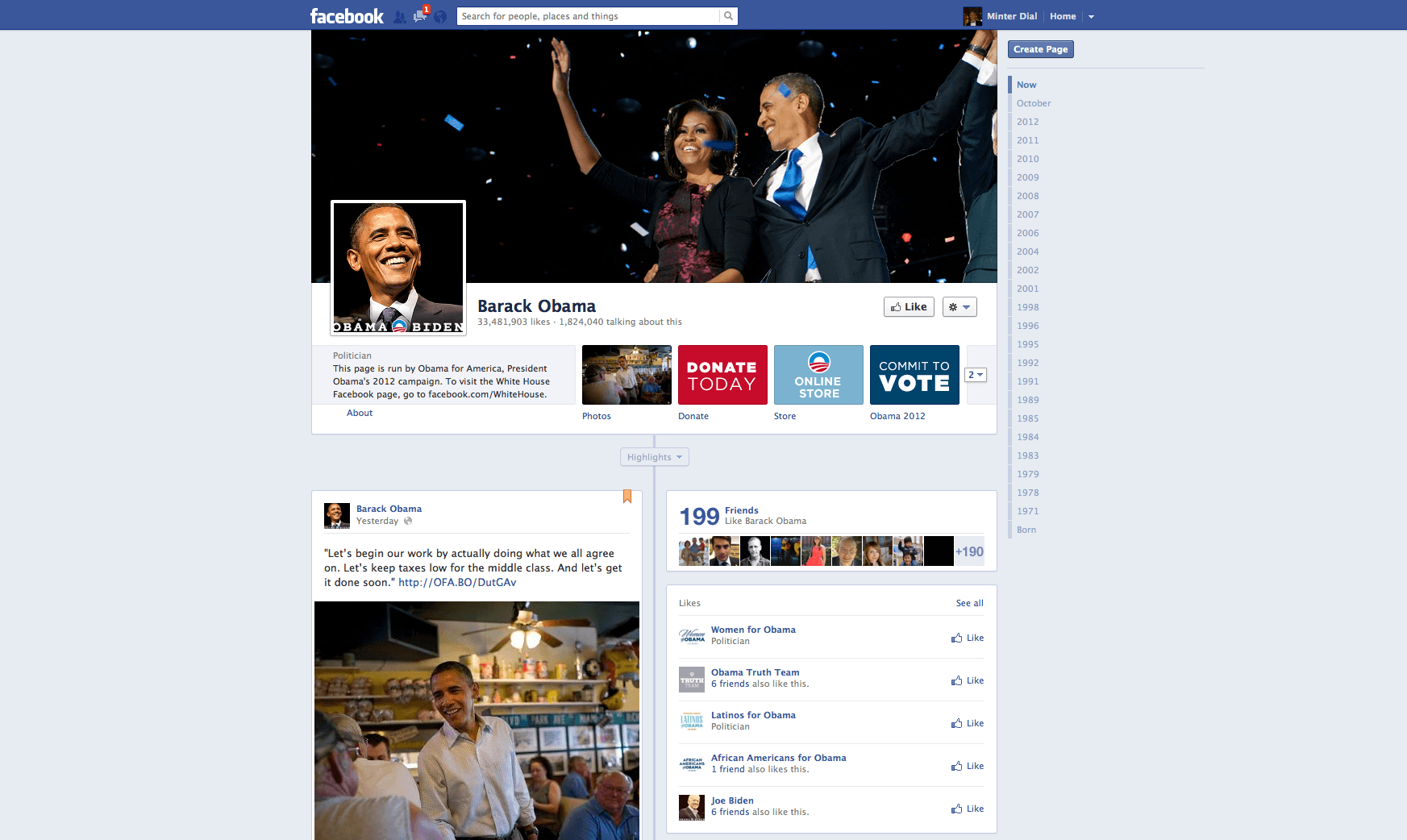 What you will probably first notice is that Obama has a rather large group of fans (33 million and counting).   He certainly showed how to galvanize support in the online community (I wrote about this recently here).  But, that is not my point.  Nor even is the point the substantial 5.4% of people who are “talking about” his page.  The number that caught my attention was lower down on the right: 199.  That number signifies that I have 199 other friends (just over 10%) of my current 1,888 who have liked Obama’s page.  When I do the same thing for the Romney page, I came up with: 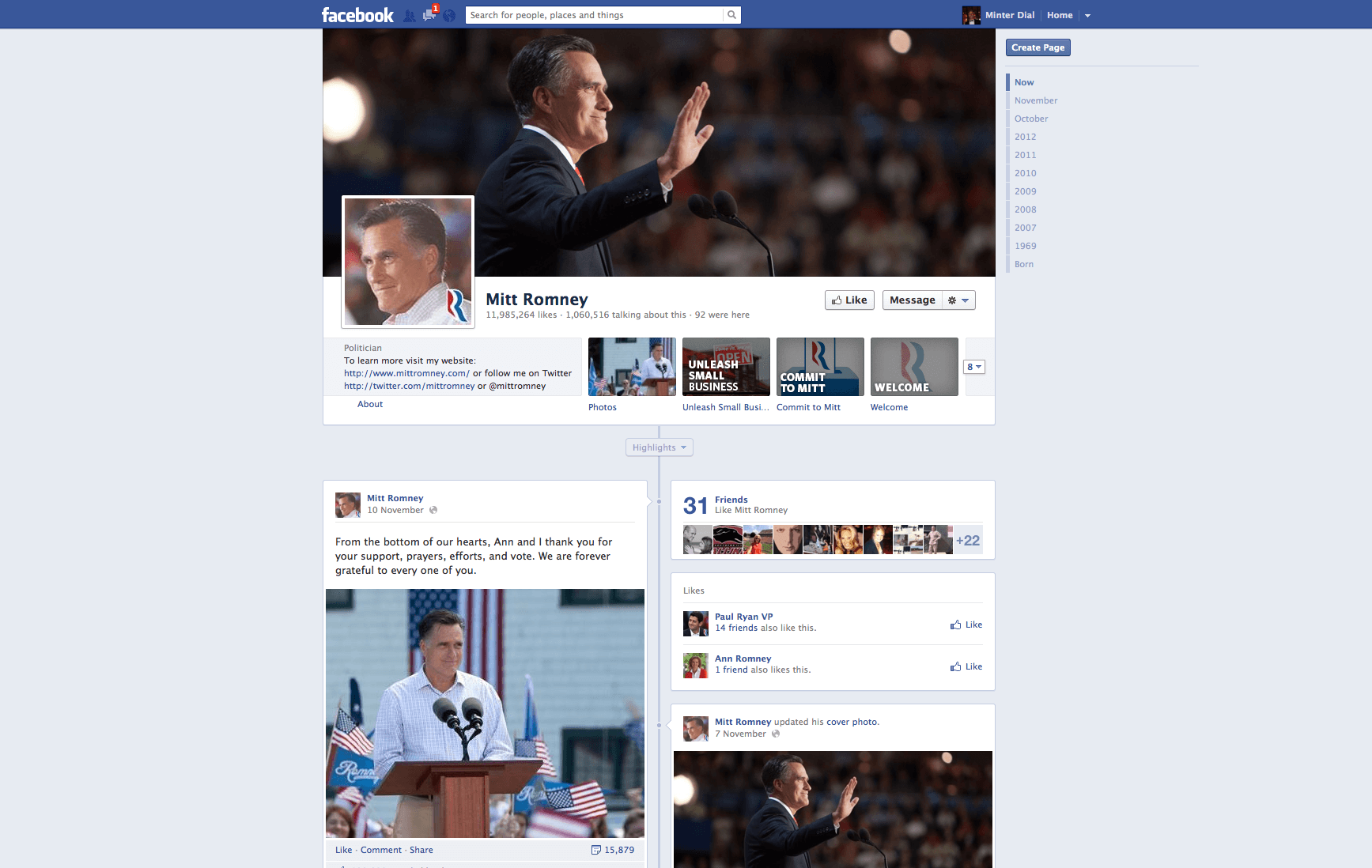 Here, you can see that I have a total of 31 friends who “liked” Romney’s page, that’s 1.6% of my Facebook friends.  The smaller details show that 44 of my friends also liked Michelle Obama’s page which was more than Mitt and Ann Romney combined (and almost as much as with Paul Ryan, too!).  On the VP score, Paul Ryan (14 of my friends) soundly beat out Joe Biden (6).  {N.B. Romney has a higher PTA score (people talking about) of nearly 10%.}

What does this mean for brand marketing?

Even when one takes into account the smaller fan accumulation by the Republican candidates, there was a substantially weaker take-up among my friends that rather surprised me.*  Maybe some of the US pollsters — whose  predictions for a super “tight” race were clearly a little off the mark –  just needed to review how their friends stacked up on Facebook to get a better gauge of how the elections were going to turn out?**  That said, the really telling point is that some brands are more prone to be “social.”  Perhaps, those brands a more comfortable in a transparent world?  And, more importantly, when as a brand marketer, you are looking for influencers and figuring out communities of interest, you can really find a treasure trove of information on Facebook.  The trick, however, is being personally invested.  The more aligned you are as an individual with the brand for whom you are working, the more likely you are going to be able to work more seamlessly with and within your community.  If a brand is to succeed in its Facebook and social media marketing, it must indeed get more personal — to understand and appreciate better the dynamics and tonality of its constituent base. {Tweet this if you agree!}  If you are not comfortable with transparency and not at ease with building community off-line, then turning to social media may not be the best use of your resources. {Here’s a modified and shorter sentence to tweet out!}

DOES THIS SCARE YOU OR MAKE YOU EXCITED?  YOUR REACTIONS?

*Alternatively, it suggests that I know a lot of 25-34 year old women who live on either side of the US?

**Obviously not a statistical representation or sound route, but there did seem to be quite a lot of anecdotal evidence in social media to support an Obama victory