For those of us brought up in the old school of “Communications”, we tended to consider a communication tantamount to a broadcast.  ”Get that message out there!” I can hear the echo of some old bosses.  On top of that, we had to manage (dominate) the message from A to Z.  Old school communications do still have their place, at least in function, as brands attempt to guide the narrative.  However, I am once again tempted to look at the Obama – Romney communication face-0ff in the 2012 campaign to evaluate the merits of different communication strategies.

Overall, it’s true that Romney tended to have a higher level of “social love” or “measured engagement” (aka retweets, likes, shares, etc.).  I think that Romney’s team did a meritous job by not overwhelming its community on the Twittersphere.  However, a deeper analysis will show that Obama (and his team) galvanized a true movement, one that “moved people’s hearts, souls and pocket books.” {Click to tweet if you agree!}.  Engagement cannot be reduced to a single number / measurement.  There is the quality of the engagement, the calibre of the commentary, not to forget the emotional response of the individual.

Courtesy of SocialBakers, who compiled a recap of the social media activities of the two candidates, you can see below the most “engaging tweet” by Obama and Romney.

The most engaging tweet by Obama and Romney during the campaign

As a digital marketing practitioner, what do you conclude?

Less is more? Sex sells? Values count?  Action is everything?

Here is my angle: Romney got traction through action.  He would exhort his supporters to rally his cause, announce his activities, such as the nomination of VP Ryan (who in turn showed more social media savviness than Biden and Romney).  On the other hand, by stating his opinion on a sensitive topic, Obama gained 6x the power (the number of retweets).  Of course, on an absolute level, Obama had 3x more followers on Twitter, but before wishing to calibrate the retweets, you have to wonder why Obama managed to get such a large following in the first place.  In Twitter as with Facebook, the bigger the community, generally the harder it is to have a high engagement rate.  Moreover, by looking at the other most retweeted messages, Obama and his followers were consistently in a more emotional space: values, family, love.  Here is the most engaged Facebook message for each candidate.  What do you notice? 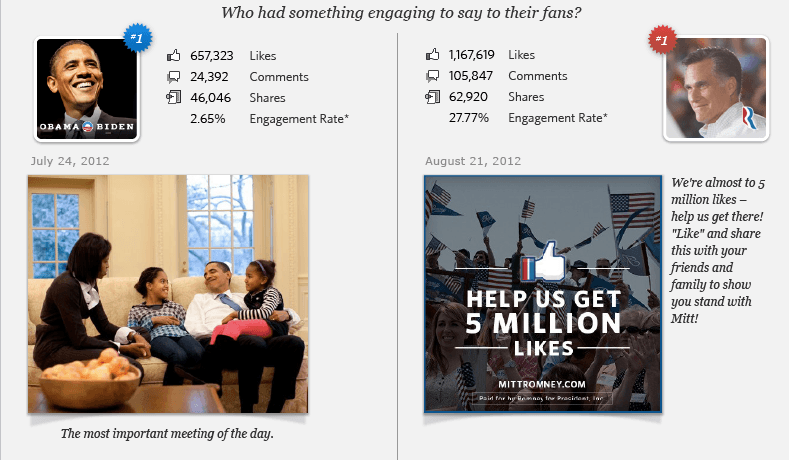 One is on the communications message: “Help us get 5 million likes.”  Sure it got traction, but it is devoid of a deeper sentiment.  The other, “The most important meeting of the day” is all in the emotion, showing family and a quote that is all about emotion.  Yes, the Romney message had 50% more likes (despite having only having 1/3 of the fans), 5x the likes and 2x the shares.  On paper, that’s a win!  However, in my opinion, the quantitative win probably has to play second fiddle to the more meaningful engagement.

The main take-aways: it is not about the absolute number of shares/retweets, etc., but the feeling behind the message that will actually move people.  {Click to Tweet, Please!}  An image is forceful on Facebook, and even on Twitter (i.e. Obama’s celebratory hug).  Finally, as ever, proof that branding and marketing messages must get more personal!

Will be glad to hear your reactions and thoughts!  (Keeping politics out of it, please!)