Too tight to call?

According to all the pre-Election media hype and poll results, the presidential elections in the US were “too tight to call” right up until the last minute. Yet, the final score in terms of electoral votes was a gaping 332 (62%) for President Obama to 206 (38%) for Mitt Romney.  The margin of victory was 3.3 million votes, or 2.7%, out of the nearly 121 million votes cast.  In the end of the day, it was over a $1 billion invested in ads, a battle that lasted nearly a year, and all that to return a status quo: same President, same democratic Senate and same republican House.  To think that Obama didn’t even need the final 29 votes of Florida.  (In case you didn’t follow, but the Florida vote has now been decided [by a narrow 74,000 votes out of 8 million total votes], so the overall results may now be cast in stone.) 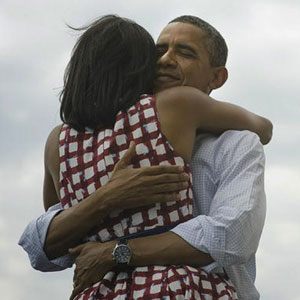 The Tweetest Sweetest Victory Shot that no one saw coming

The question I have is whether there was any degree of lucidity anywhere about the final outcome.  Did not anyone see this victory coming?  Or was this “too close to call” just a media-inspired desire to have audience and, hopefully more nobly, greater voter participation?  Maybe, rather sinisterly, some people did know it was going to be a sweep,  but in order to avoid voter disaffection, kept up appearances?  Alternatively, should we not question the purpose and/or strength of polls?  In the realm of democratically elected presidents in a two-party race, that seemed to be a rather convincing victory and, with today’s more sophisticated tools (especially the internet), I can’t help believing that the polls should have been more accurate.  The tightest thing we might have seen was the Presidential victory embrace (right).  {Click to tweet if you agree!}

To put things into perspective, that said, there have only been eighteen other elections (out of the 52 total Presidential elections in the US) where the President’s electoral vote was less than 62%.   And, we fell well shy of the 130 million votes in total of 2008.  Source: US Constitution. Another scenario that could help explain the more-than-paper-thin victory might be that the unplanned events of the final three days had a material impact on the undecided or floating voters.   There, I refer to the Sandy storm and the way the President managed it, the press he received, the authentic experience with Governor Christie (R) in New Jersey or the late-in-the-day support of New York’s independent Mayor Bloomberg?  Then, it was a case of being blind-sided by swing moments, rather than swing states?

I fear that, in spite of the need and the looming fiscal cliff, the results of this hard fought, divisive election will not bring the country any closer.  My take-away is, all the same, that the polls look terribly wrong post factum.  I will be keen to see how pollsters adjust, to take stock of how they got it so wrong.  Did pollsters, like the Republican, under-represent the ethnic and/or woman’s vote?  Did the pollsters possibly underestimate the power of social media, where women play such a dominant role?

One thing is for sure: 2012 will have been a busy year in worldwide politics and the role of social media and, more broadly, digital media is going to play an increasingly bigger role (even in France!).

Your thoughts, as ever, welcome!