If you want to know how to grow your Twitter following, I observe that there are five clear methods to do so.  The bad news is that there is no free and easy path, unless you are perhaps already a mega star.  Whether you represent a brand or are an individual, gaining a Twitter following will require a cocktail of singularity of purpose, hard work and a healthy dose of generosity.  Being genuine, helpful and valuable are the underlying tenets of the Twitter universe. {Please click here to Tweet this out!} 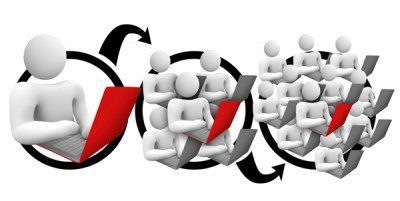 Building your following is not the end

To be clear, social media marketing should not be about having the biggest number of Facebook fans or Twitter followers.  Nonetheless, the opportunity to raise your game and increase your online visibility on social media platforms such as Twitter or Facebook is there for those who are willing to take the plunge.  Before anything, the key consideration is to set up an objective, and then make sure to put the appropriate resources against that objective.

Generally, getting a following on Twitter is a slow grind, especially when getting off the ground.  However, there are some very clear ways – including some more traditional approaches – to help accelerate the process.  These ‘faster’ methods investments, which require deeper investments in time and money (#3 and #4), are tempting; but, they come with downsides.

So, there are five discernible ways to build your Twitter following.

Once you achieve a certain magical level, the hockey stick effect takes into effect whereby you attract because you have attracted (the crowd effect).  Arbitrarily, I used to say anyone with over 10,000 followers was probably well positioned for the hockey stick.  If you have acquired a large following and are following few (over a 2.0 follower/followee ratio), you could become considered an influencer on a given topic.  If the ratio is over 10, then you are clearly a Twitter star, if not an IRL celebrity!

Twitter is an excellent business tool.  Having a large number of followers is not the Valhalla. What counts is the level of trust you create and the amount of people who read, share and click on your tweets.  Hopefully, by applying these techniques you will better be able to grow your Twitter following, with due emphasis on points #1 and #2.