The seesmic worldwide movement — dare I say mass media — on Twitter after the announcement of Pope Francis I provoked over 7 million tweets (on the first day alone) per Mashable. The Pope’s twitter account, @pontifex, has just over 2 million followers.  If you include all the other language-specific papal accounts, the total number of followers passes 3 million.  I note that the @pontifex account only follows 8 people — his own accounts in other languages.  I kind of thought he just followed one.  {No Comment}.  According to Twitter, at its peak, the tweeting around the Papal announcement reached an apex of 132,000 tweets per minute (well below the world record, we note, held by Obama at 237K/minute).  So what? you might ask.  It’s a sign of the times that phenomena such as the Pope’s announcement — a religion vested in antiquity — are living more and more online versus offline.  {Click to tweet}.

Mass to Mass Media to…

In the hours following the announcement, Pope Francis and the various hashtags (#pope, #popefrancis, #wehaveapope, #vatican, #papa …) captured 8 out of the top 10 trending topics worldwide.  That’s domination.  The #Pope even scored in Pakistan and the UAE (see below).  One could say that the Pope’s first mass has gone viral… This means that his presence on Twitter is very much the news, not just what he is going to say and do differently.  Thus, his mass goes mass media passing first through Twitter.  {Click to tweet}  No wonder Facebook wants to get in on the hashtag action.  (Read more here in the Guardian about the Facebook hashtag). 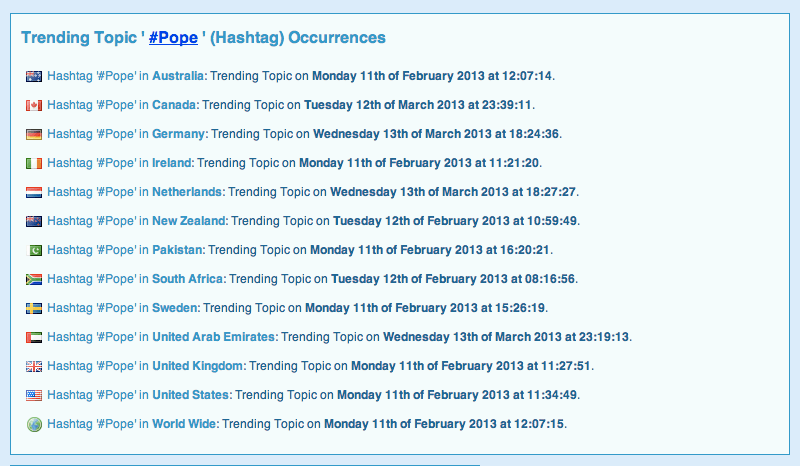 When a worldwide phenomenon like this occurs, a mass of people go straight to the airwaves to share their thoughts.  It happened with events like the election of Obama, the tsunami and Fukushima disasters, the World Cup… And nowadays, what happens on Twitter happens in mass media. {Click to tweet if you agree!}  As a result, I see a rather bright future for Twitter.  People who have yet to sign up will find themselves more and more obliged to get with the programme, helping to render Twitter into its very own form of mass media.

If you’d like to visualize the way communities are congregating online, you might enjoy checking out BlueNod’s way of visualizing the #hashtag communities and influencers.  See below for a BlueNod snapshot around #pope.  Clearly, there are other big influencers on the subject other than the #pontifex’s account.  (The size of the circle declares the size of influence). 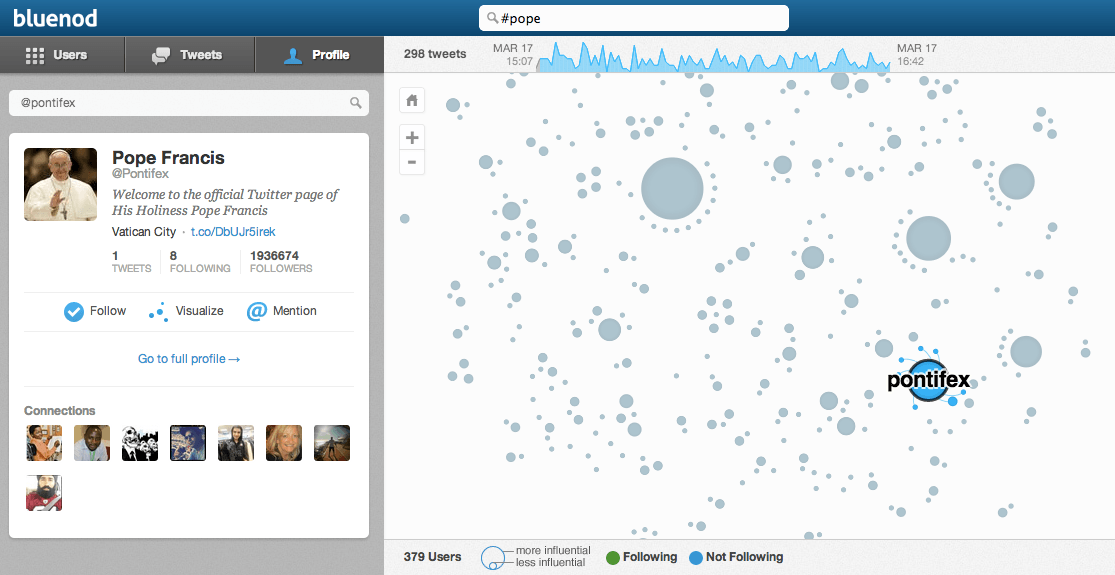 A good second goes to the crack by the Jesuit priest James Martin:

That seagull on the Sistine Chapel roof by the conclave is great product placement for the Holy Spirit.

I’m prepared to bet that by the World Cup 2014 in Brazil, with a few more mass media tip-offs, Twitter’s ranks will swell to rival Facebook. What do you think?