It has been a few years now that birthdays are now filled with electronic wishes. We receive a great many more than in the past, with the bulk of them coming on social media (especially Facebook).   Birthdays are a classic for CRM-minded organizations.  On my birthday this year, among the 200+ messages I received, I got 8 messages from organizations that had captured my birthday date and decided to “invest” in a greeting / dedicated offer.  I thought it would be worthwhile dissecting and analyzing them to come up with some good do’s and don’ts for social CRM purposes.

Here are the eight organizations (and the GMT hour of delivery) that sent me wishes for birthday :

The first comment is that ALL but InterNations opted for an email rather than a social media communication.  InterNations used its own network (which then created an email prompt).  The second comment is that all 8 companies are based in Europe; and, half of these messages were programmed for delivery by 8am.  I was curious as to why no North American-based company was present?  The last comment is that 5 of the 8 are pure players (online only).  There are just three “traditional” businesses (in purple).  Yet, I can wager safely that MANY traditional businesses have my birthdate (and contact details) on record.

The big take-away (or reminder) for me is that brands are not able to connect with individual consumers on social media — even on their birthday — unless they have established a personal relationship.

The nature of the birthday greeting / offer

So, the question then becomes what is the nature of the communication and intended engagement?  Presumably, the various marketing teams have an internal conversion calculation of some sort.  In my case, they scored a 0/8 (although they did get this blog post in exchange).  Here is a summary of the “offer” included in each birthday greeting:

Do’s and Don’ts Wishes for Birthday

There are a number of good and bad practices that I wanted to draw out of these communications.  Overall, in an era of social media and big data, the marketing approach seems very meek, not to say poor.  As much as people, agencies and consultancies are waxing eloquently about personalized one-to-one communications, the ways to synergize and aggregate data from multiple sources,  and the opportunities to engage in “meaningful, authentic” conversation in social media, it seems from the, granted microscopic, sample of 8 companies, that we have a long way to go before those opportunities are realized.

Herewith some do’s and don’ts as far as wishes for birthday may be concerned:

: Don’t offend the receiving party with getting basic information — such as the sex — wrong.  Of the businesses cited above, Sephora has one of the better loyalty programs.  Sephora is known to have a strong CRM database, which makes this error all the more surprising.  First, you can see below my profile in Sephora’s “Beauty Insider” databse.

So, the question becomes, how is it that I get this offer from Sephora? 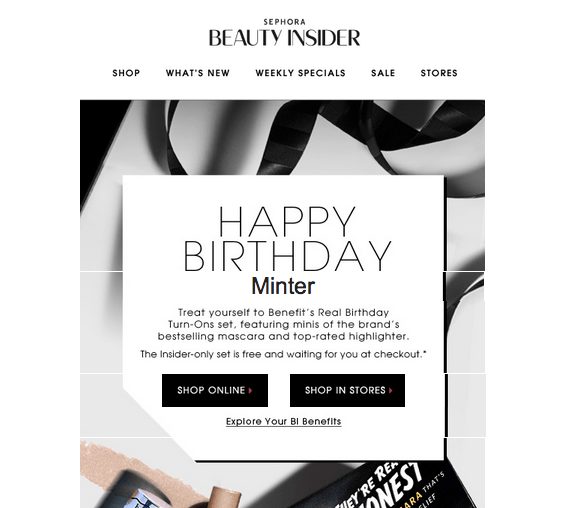 Treat yourself to Benefit’s Real Birthday Turn-Ons set: bestselling mascara and top-rated highlighter!  Hum, maybe they want me to get that for my wife on her upcoming birthday?  One redeeming quality to Sephora’s greeting is the elegant layout and type-set.

Don’t #2: Don’t make errors or spelling mistakes… I would suggest to find a way to correct obvious mistakes, like a lower case first letter on a name?  In the below mailing from Opodo (FR), not only am I considered a woman (“chère” is feminine), my name is spelt “minter” as opposed to “Minter,” presumably because that is the way I entered my name originally.  I would strongly suggest changing the sex and would recommend adding an upper case automatically. 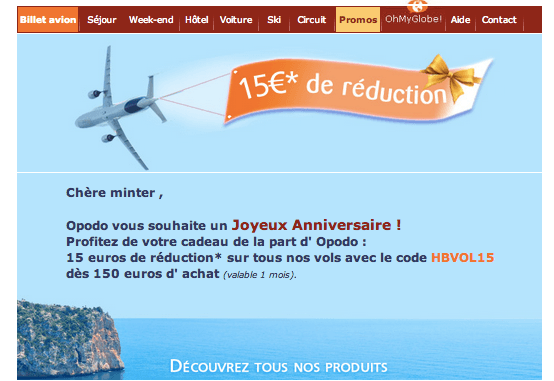 Don’t #3:  Don’t make the careless shortcuts.  The idea that one would have a nostalgic feeling about all things that happened throughout the year of one’s birth is a rather poor hook.  Copains d’avant (which I note is still in beta mode despite a launch in 2001…?), thought it would be cute for me to revisit what happened in 1964… I must remind them that my sounvenirs of 1964 are rather limited, and all the more so for the events that happened in the eight months preceding my birth. 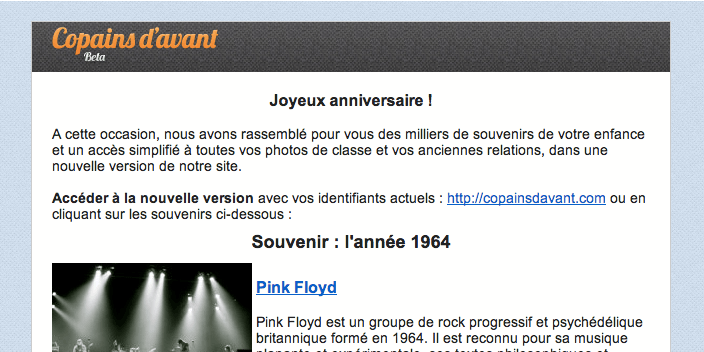 Don’t #4: Don’t bullshit.  MMA sent a message claiming it was specially designed for me by some Philippe Geluck.  However, I don’t even know who he is (he’s a Belgian comedian).  He certainly doesn’t know me.  The wishes came without the any personalization (outside of using my first and last name, which btw felt a bit formal).  Notwithstanding the glitch in using the first name protocol (I use my middle name, Minter), they might have considered toning down the notion that this eCard design was “only” for me!  Finally, it is signed by “my insurance agent” but the link goes to a generic anonymous MMA branch page. 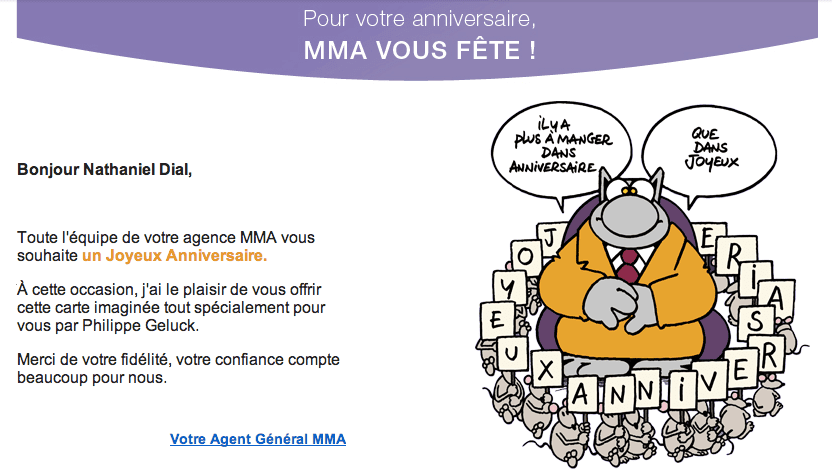 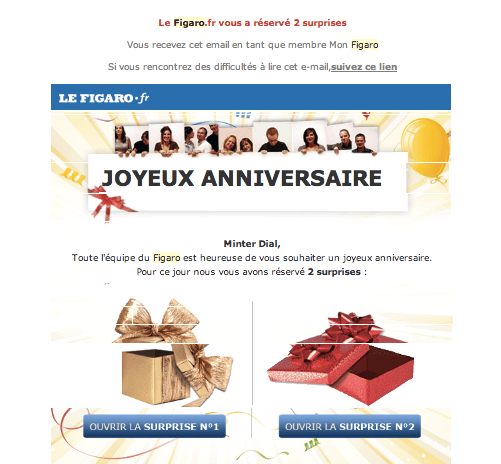 Digging further into Le Figaro’s database, they might have observed that I have never read a single article on cooking (although my wife is a fabulous chef).  Underneath these ‘surprises,’ Le Figaro offered me the recipe for a chocolate cake in Madame Figaro (see the theme?) and also — slightly more relevant to me than the 1964 from Copains d’Avant — a recap of other historic moments on August 14.  On balance, Le Figaro has the best catchy page, despite an irritatingly fast animation of the wrapped boxes.

So, if BIG DATA is truly here, as I stated in a prior post on the topic, the issue is: when are businesses going to start managing small data effectively?  {Click here if you agree!}  If they can’t get wishes for birthdays straight, heaven help them managing more complex, more rapid and multi-platform information.  Hiring a big data specialist might be part of the solution.  But, in my opinion, the first part is having a marketing team that truly cares and knows how to be in the customer’s shoes.  Secondly, the style of message and brand personality must be coherent.  Thirdly, even if email seems a little old hat, it can be an eminently social tool.  There must be ways to make the offer more explicitly social without having to convert to some kind of purchase.  At that point, we will start to engage in Social CRM.  Until then, we still need to get the basics right.

Anyone have any other good examples of what to do or don’t do?

You can read up my post on Social CRM for Birthday Wishes last year here.