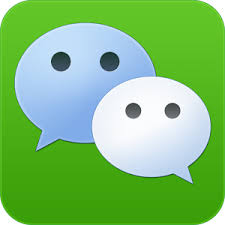 WeChat, launched by Tencent initially in January 2011 under the Weixin brand, is a far cry from Twitter.  In film speak, we might say that WeChat is Whatsapp meets Twitter meets the iPad.  {Click to Tweet}  There are some 350 million users already, with 70 million coming from outside of China.  In terms of features, the voice messaging service is fantastic.  If you have ever been underwhelmed by the less-than-friendly iPhone keyboard, you can skip typing altogether and send voice messages.  {I reported on this before and some of the other delightful WeChat and LINE functionalities}.

Most of today’s Twitter users are now accustomed to squeezing out messages in 140 characters.  In Chinese, those 140 characters are literally enough to write a chapter.  Writing Chinese characters or kanji in Japanese is quite an art.  Meanwhile, I am fascinated by how the ideogram-based cultures (i.e. Chinese and Japanese) are paving new usages and functionalities on micro-blogging sites.

WeChat currently comes with 9 pages of ’emoticon’ options (see below), including hand signals, cute penguins (imported from QQ, right), dogs, ghosts and more.  Representing more than emoticons, these additions to messages are generally referred to as stickers.  The trend of stickers has become a business model unto itself.  You can add some free collections, while others cost $0.99/set. 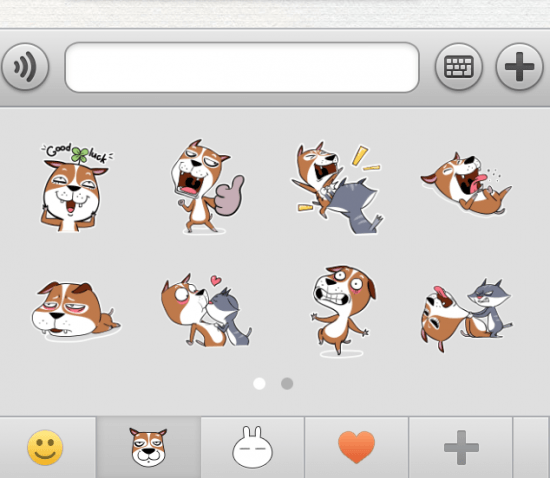 The latest discovery was the animation accompanying the word kisses.  I’m sure there are many more, but I could not help but marvel at the discovery that comes with WeChat.  The kisses fall down the page in a veritable takeover.  The takeover lasts only a few seconds.  But, I found it quite cute.  All I need now is to have more of my friends on board! 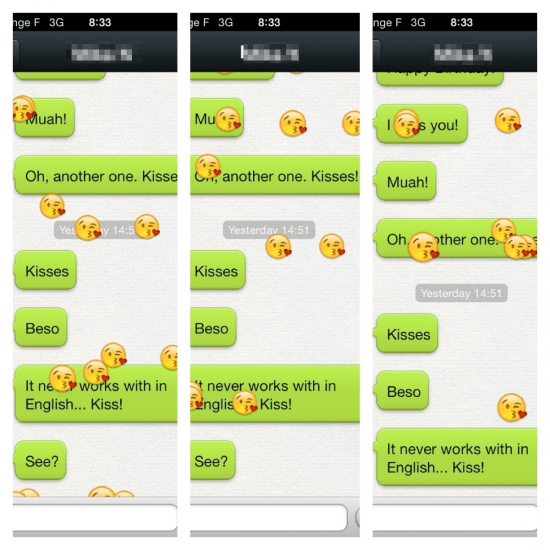