Last week (July 3), Tencent’s market value dropped $15 billion. On a total base of $330 billion, that’s a 5% haircut. The media’s narrative was that the stock price drop was due to an announcement by Tencent that they were going to limit the amount of time children (under 12) spend on their top grossing mobile game, Honour of Kings. This is a most commendable move that comes on the heels of public and government criticism. In the specifics, recently, two youngsters died, directly linked to an addiction to the game. To think that, in China, public pressure on social media can impact, if not inform a publicly traded company? Of course, Beijing is probably the far bigger stimulus. 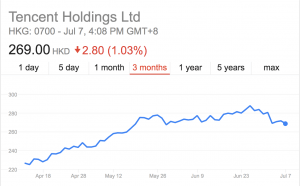 In Search of Integrity…

In light of this news, I have a few salient comments for business leaders elsewhere.

1. First, China is innovating. Tencent is a beacon of the Chinese economy and, over the past five years, its stock has risen from a price of 44 HKD to hit a high of 288 HKD. Trading today at 267, that 5% dip seems more like profit-taking than a real concern for the company’s direction. At the end of 2Q, Tencent and Alibaba were in the top 10 highest valued companies in the world. Having had the chance to work with Tencent in the past and being a big fan of its banner social media, WeChat, it’s clear that Tencent’s sense of the market and innovation is world class.

2. Secondly, in today’s more transparent world, leadership cannot be solely focused on shareholder return … even in China. I believe company’s have to take stock of their greater responsibility toward their customer base. It’s a central component to customer centricity. It seems evident that companies whose employees feel awkward or ashamed of their company's ethics are bound to suffer sooner or later. Click To Tweet Some companies are in the business of taking advantage of customer weaknesses (such as the tobacco, gaming, gambling industries…). Others will prey on customer ignorance or laziness (insurance, legal…). Others yet pander to insecurities (beauty, fashion) or vanity (bling bling brands). Then there are those whose business model is orchestrated around “locking in” the customer (e.g. subscriptions or the razor business). All in all, leadership needs to be a step ahead, not only to avoid social media, media or governmental backlash, but to make sure their business model and methods have integrity.

3. Addiction to games, gambling and screens is a true societal issue that needs to be addressed, not just by the government, but by companies and individuals alike. Some companies (e.g. Volkswagen) have started to impose limitations on email usage. In January 2017, France put into place new employment law that forces organisations (with over 50 workers) “0to start negotiations to define the rights of employees to ignore their smartphones.” (Guardian article) Personally, I’d advise business leaders not to wait for the government to act but to establish their sense of responsibility and ethical lines.

The new world order of business is evermore complex because the goal posts are being moved constantly. The old advantages of opacity, unequal levels of information, controlled one-way communication and the security of big business are being challenged across the board. It is my strong conviction that leaders will need to be substantially more responsible, not just about the planet, but about their company’s ethics and behaviors. Not only will the long-term health of the company and its stock price be at stake, their employee’s engagement depends on it.