I’ve been known to start off conversations by saying: The more digital you become, the less digital you will want to be. #DigitalIQ Click To Tweet Most Gen Y don’t agree with me; Gen Z typically frown at the thought; and Baby Boomers tend to split down the middle. The underlying concept behind this question is: Is digital bound to deliver progress? 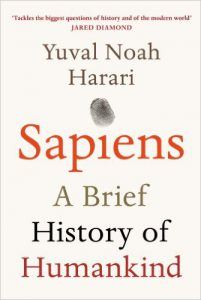 In the best-selling book, Sapiens, author Yuval Noah Harari definitely puts a rather gloomy note on how we have “evolved” and/or are “evolving” as human beings, and about our ongoing obsession with progress. In each phase along the way where Homo Sapiens has made breakthroughs, Harari calls to task the so-called “progress” and highlights the mitigated results, especially as it concerns our general level of happiness. It makes for a hugely important read given today’s world of fast-paced change, innovation and “progress.” In the wake of reading Sapiens, I have come across a number of other articles that seem to point in the same direction: What if technology were not actually bringing about progress?

The other day I was listening to a Freakonomics podcast, How to Launch a Behavior-Change Revolution, that discussed with Harvard Economics professor, David Laibson, how he approached the “evil” of laptops in the classroom. The presence of digital devices in the classroom is a veritable beast for professors and fellow students alike. In a novel approach, Laibson imposed an opt in approach, whereby students were as 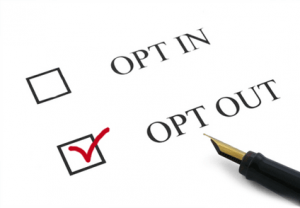 ked if they preferred to bring their laptops into the classroom. The others were to opt out (by default, if no response provided). Those who opted to bring their laptops were then isolated in a specific area of the classroom, to avoid the constant distractions and disruptions (notifications, messages, Facebook feed, keyboard typing…) that they bring to those around them. About 80% of students opted out and the results at the end of the year showed a high overall positive rating for their facility to learn. It sort of reminded me of the days of the smoking section, back when trains and airplanes actually allowed smoking onboard. Even the smokers preferred to sit in the non-smoking compartment. I can’t help but believe the laptop users would actually prefer to sit in the laptop-free area as well… 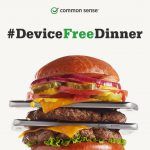 Never two without three, as the French saying goes, a friend of mine posted on Facebook this article from The Independent, Bill Gates and Steve Jobs raised their kids tech-free — and it should’ve been a red flag. The article spoke about the noxious effects of all these tools and devices on kids and family life. It states that both Steve Jobs and Bill Gates strictly limited use by their own kids of the very devices they helped create, because they implicitly knew of their malevolent effects. 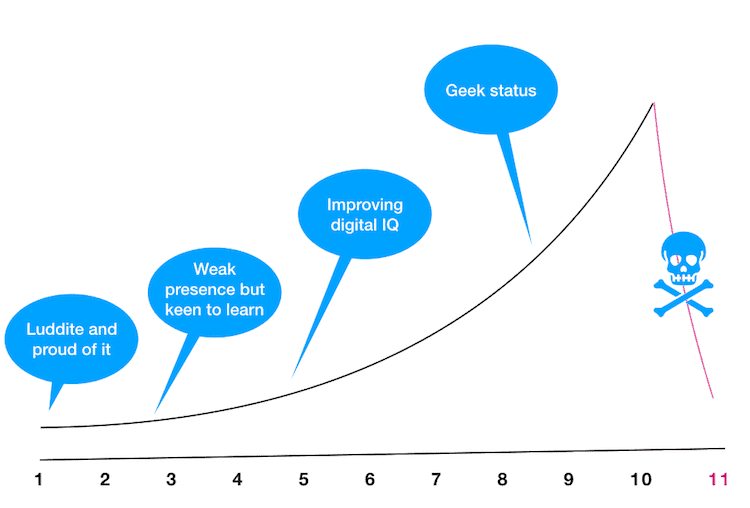 One to Eleven Digital IQ (with a wink to Spinal Tap). The higher your score, the more you use digital tools and platforms with ease. Comes a point, though, when some swear off it…

Sean Parker, co-founder of Facebook, dazzled the airwaves in a recent interview in Philadelphia, saying “I don’t know if I really understood the consequences of what I was saying [or doing], because [of] the unintended consequences of a network when it grows to a billion or 2 billion people and … it literally changes your relationship with society, with each other … It probably interferes with productivity in weird ways. God only knows what it’s doing to our children’s brains.” (See Axios article). Enough to pause and think, eh?

Moreover, the data on youths — those most involved on digital — shows rising suicide rates in the UK, Sweden and USA… And the picture isn’t necessarily better for adults (see this Guardian article in UK). Of course, digital is not entirely to blame; but one could legitimately conclude that societal progress hasn’t improved our mental wellbeing.

Technology makes us a slave to progress?

In all of the stories above, there seems to be a common thread, questioning the notion of progress. Is technological progress bound to be an improvement? What if progress were in fact the root of all evil? For example, as fast as we are devising new and exciting ways to use artificial intelligence, harvest insights from banks of big data, invent new cures thanks to advancements in genomics, craft humanitarian rescues with drones, or create currencies with negligible costs and unfettered by state control and manipulation, there is a reverse side of the coin. Deviant individuals are unscrupulously working on using AI, big data, cyber currencies and drones — even genomics I am sure — with decidedly evil intent. And, if you listen to Harari, it seems that each revolution — cognitive, farming, scientific, industrial, information and biotechnological — has brought around unexpected consequences, the nature of which have not been, on balance, as beneficial as typically imagined when compared with the initial forager homo sapiens, some 70,000 years ago.

I take these disparate conversations, articles and book as a sign of how there may yet be a broader trend away from technology and a gradual realization that technology is not actually improving our world… enough. In which case, I continue to believe strongly in the need for greater meaningfulness. Click To Tweet

Your thoughts and reactions are welcome!