Gary Vaynerchuk put up a video in which he says that, if you’re in B2B and don’t have a Linkedin strategy, you’re in trouble. And I would tend to agree with him. There was one phrase in particular that I liked in Gary’s video:

“If you make content on the Internet as if you’re the TV show and not the commercials in between the TV show, you will get a disproportionate return on your investment.”

There’s a whole new opportunity to create an influential network on Linkedin, and I’d argue not just for those of you in B2B per se. Even executives working in B2C would do well to beef up their presence and reputation on Linkedin, since B2C companies also require personnel, expertise and inspiration.

For the most part, I see people rather aimlessly using LinkedIn. And then, all of sudden, people wake up and appear actively on Linkedin. For example: whenever someone feels like their job is in jeopardy or they want a change. But, by then it’s too late. Getting your LinkedIn profile ‘dusted off’ is not like updating your CV. It takes time to build up your presence and network. A good LinkedIn strategy involves having adapted content, engaging (e.g. liking, sharing and commenting on others’ content) and developing a network of connections with trusted individuals. Among the big NO-NO’s, though, is to think that by having a large number of people in your network, you’re getting places. In my opinion, having a large number of contacts that you don’t know or trust, not only is meaningless, it reflects back on the type of person you are. 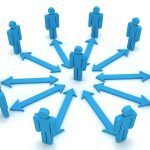 And yet, Linkedin encourages its members to have as big a network as possible in the way it promotes connecting with people with only the faintest of links. Members are constantly taunted and teased to connect with people whose bios are put in front of you. And users are encouraged to send a one-click connection request. The problem is that LinkedIn is encouraging an entirely false sense of network. And I think this could be its undoing ultimately. How on earth does it make sense to promote connecting with strangers in a business environment where relationships, trust and ‘who you know’ are so important to our careers? As the inspiring Oleg Vishnepolsky, CTO at the Daily Mail, said in a Linkedin post, “Networking is not about collecting contacts. It is about building relationships. The real power of networking is when you introduce other people.” Without knowing someone, you should never introduce them to others in your network.

Over the years, I have painstakingly verified every connection request I receive and been intentional about the people to whom I’m sending connection requests. As I have written in the past, I tend to provide a message to those who have sent me a request to connect, whether or not they have bothered to send an accompanying note (which they should do, by principle). Per Oleg’s comment, I’m also careful about making introductions that matter to each side.

So, with that, here are my five top tips to make a strong network on Linkedin.

LinkedIn could help make networking so much better

If I were talking to Linkedin about this, I’d run riot about their UX and how they are promoting the wrong behaviour. I’d encourage, for example, people to follow (by default) rather than to connect people who don’t know each other. At the end of conferences I give, I inevitably get a slew of connection requests. Sometimes, I might have asked an individual a question in the event, or even shook their hand. But, that doesn’t mean we know each other. I can’t possibly accept all these requests from strangers. Not only would I quickly exceed the 5,000 people, I’d have a worthless network, with too many unknowns, spammers and unresponsive people. In a year, I’d be scratching my head about who on earth these people are in my network. And I would dare say, they too would be thinking the same thing. Naturally, the next challenge is declining (“ignoring”) such requests. I’ve made a habit of replying, but it doesn’t always go over well. When I explain my policy, I inevitably get a few rather peeved individuals who can’t fathom why I didn’t accept their request, even though I’ve never even come across them. One recent and defensive reaction was: “I had hoped my credentials speak for themselves.” Really?

I’m always willing to hear out someone’s explanation and, more often than not, suggest getting together to get to know one another better. Judging by the unresponsiveness of the people to the individual reply I make, these requests are merely proving their nonsensical wastefulness. Why would one want to connect with someone who doesn’t reply to messages? The number of existing connections who don’t reply to Linkedin messages is painful as it is, considering that I’ve kept a tight control on my network. And that ‘waste’ is exactly one of the reasons Linkedin’s future could be jeopardy.

What use is a network if people don’t communicate on it?