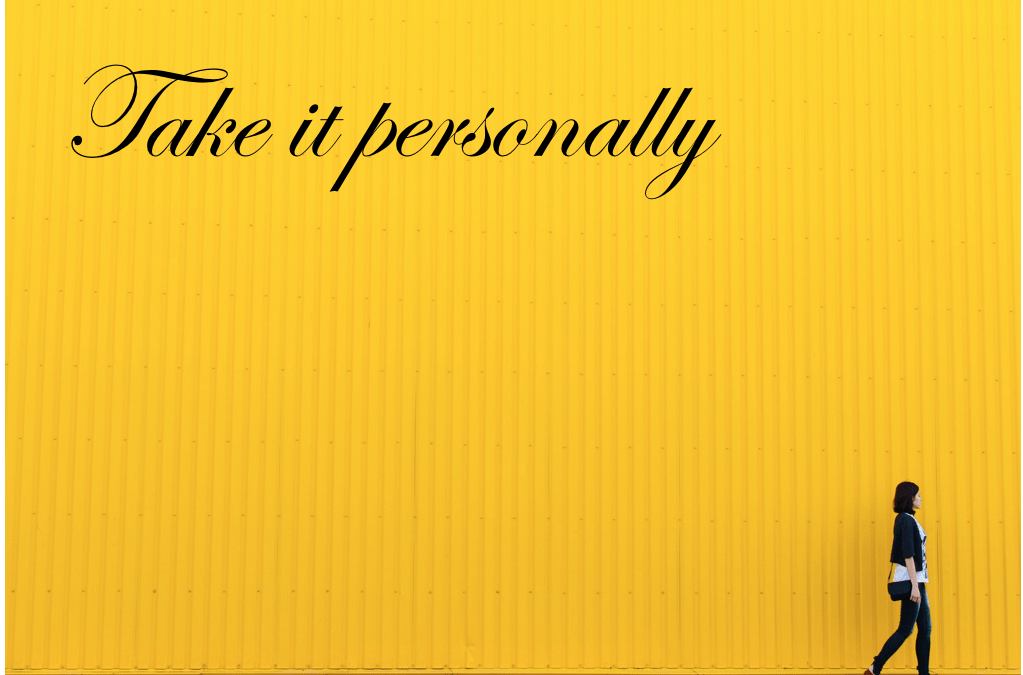 When someone at work once told me not to take his comments personally, I flipped a lid. Really? How was I not supposed to take personally the harsh criticism about the strategic note on which I had labored intensely over the weekend (i.e. at home)? What was most objectionable was the manner in which my boss delivered the criticism, less the actual substance. Yes, I could have written it from a different angle. That was a judgment call. He deemed I got it wrong. OK. But, he didn’t need to be so downright vile and insulting in his expression. The how matters.

It’s the very same people who are wishing you to innovate faster, better and cheaper. They will implore you to spend company money as if it were your own. They’ll also exhort the employees to expend their discretionary energy and express their creativity at work in order to innovate.

If I were running a company, I’d absolutely want my team to take it personally. The key point behind the phrase “don’t take it personally” more times than anything is because the person about to deliver the message doesn’t have the empathy to do so in an appropriate manner. The how counts.

Personally, I’d want to tap into my team’s discretionary energy not because it makes me more successful, but because it will be more fulfilling for my team. Criticism and feedback is a very necessary part of performance. It should be constructive criticism that helps the receiver grow. Your feedback comes in a context, as part of a long-term relationship. If you give your feedback in a rude manner, you are basically saying that you don’t care about their feelings. Take care of your team and they’ll take care of the business.

The perils of celebrity status

While I want my team to take their business seriously and personally, there’s an important distinction to make about how to handle the external comments, e.g. customer feedback, trolls and naysayers. When he got labelled as greedy or the devil, Microsoft founder and Chairman, Bill Gates said that ‘when you’ve had the level of success I’ve had, … you’re going to have some people saying some nasty things.” Similarly, Evan Carmichael said, “If you’re doing something big, you’re going to get haters.” In the case of such success, best you can, you should definitely avoid taking insults personally. It comes with the territory. But, as ex-MPS in Britain, Teresa Pearce and James Brokenshire, discussed openly on BBC, I recognize that it can be hard not to take that abuse to heart. Managing not to take those diatribes personally, yet often written anonymously, is vital for your own mental health. The civility of public discourse (especially online) is a whole other topic.

Sifting through for the right stuff

As an executive, the point here is that when you look at the comments from the masses, you must put a distance between you and your success. You need to try to sort through the language in order to take away the most useful message. In most instances, the angry comments and responses will speak more about the other person’s issues and character flaws than yours. Feedback that is expressed clumsily can still be valuable, as long as you know to put your sensitivities and ego aside. We have to accept that some people in the public domain don’t know how to provide appropriate feedback — especially when they choose to hide behind anonymity. Yet, they may indeed have had a singularly poor experience with one of your products or employees. Emotions get the better of them and they explode with expletives. Here, the key point is to sift through the aggressive language to find what’s important. For such communications, think of it more as if it were a transaction. On the other hand, if it’s a long-term client who’s ranting, then there may be legitimate room to take it more personally.

When you’re engaged in a long-term relationship, like working with teammates at a company, it ought to be professional and personal. When it’s a one-time transaction, such as an extreme opinion from an external party putting down your success, be stoic.