Last night, at the MSG (not-in-my-salad) Arena, there was a curious heavyweight boxing match between two Chinamen. One, in the gold shorts, was the China of Optimism (CO). In the other corner, wearing satin red shorts, was the China of Porcelain Doubt (aka PCDo). The bout was about to enter into its 10th round when I curled up and went to sleep. It is probably going to go on for a while further. In fact, the match may just as easily step outside the ring and resound throughout our global arena. In any event, here were some of the highlights of the match.

In the first rounds, CO was all over PCDo. Some ringing hits to the upper body as well as inside on the chin(a):

* In China, as evidence that access to the stock market is truly democratizing, there are on average 200,000 new brokerage accounts opened each day. In 2005, there were just 2 million opened all year.

* China will overtake the US in number of Internet users in 2009: “There are now an estimated 137 million Internet users in China, and that number has been growing by 18 percent since 2004 until it picked up even more steam in 2006, going up to 23 percent. The United States has 165 million Internet users, according to Pew, with 25 million of those users being aged 12-17. At the current rate of growth in China, the number of Chinese web surfers will surpass the number of American users some time in 2009, and it will continue to rise sharply afterward. With more than half of Americans already online, China’s growth over the next 10 years will easily dwarf that of the United States.” — Jeremy Reimer . As my friend Mitch reminded me from Singapore yesterday, one of the interesting facets of the Chinese internet boom is the censorship of Beijing and the permeability of the Great Chinese Firewall (see BusinessWeek article).

But, PCDo was not to be outdone, storming back with some profound counterattacks for the remainder of the evening. Even though PCDo is slightly chubby around the midrift, his age and world-famed wisdom pulled its weight.

* There is much to say about the Chinese demographics, notably that the total population will spiral up to a peak of 1.5 billion people by 2030. More important is the composition of that 1.5B population. By 2040, the UN projects that the elderly (60+) share of the population will jump from 12.8% (or 174 million according to a document issued by the China National Committee on Aging in 2006 to 28 percent, a larger elder share than it projects for the United States. By 2040, assuming current demographic trends continue, the Chinese elderly will number nearly 400 million–more than the total current population of France, Germany, Italy, Japan, and the United Kingdom combined.** When you compare the span of time and the rate of increase of elderly in China to the West — whose elderly share rose from 10% in the 1930s to an anticipated 25% a hundred years later — one has to assume that such a meteoric change will have rude consequences in the social climate and economic dynamics. Courtesy of FuturePundit. 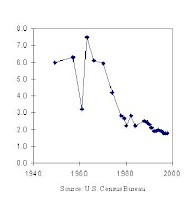 * Currently, the Chinese Fertility Rate is 1.82 births per woman. In 2001, the average was estimated at 1.98 in rural areas and 1.22 in urban areas. (Hamayoun Kahn study). See right: the People’s Republic of China’s Fertility Rate 1949-1999 as estimated by the US Census Bureau graph.

* The UN projects that the size of China’s working age population, on whose shoulders will be the burden of creating wealth and taking care of the burgeoning elderly class, will peak in 2015. The rate of decline after that point will depend on future fertility rates. If the fertility rate remains constant (an optimistic viewpoint for some), the population of the working-age Chinese will drop a staggering 18% between 2005 and 2050. And, it could be considerably worse than that as well if the fertility rate declines. The risks would point to wage inflation due to a lack of workforce supply.

* Considering the socio-economic pressure, just 25 percent of China’s total workforce, urban and rural, have any pension provision at all.

* Bare Branches offers some statistics on the ratio of boys to girls. “In China, the official ratio is 117 boys born for every 100 girls, but the reality is probably 120 or more. In India, the official birth sex ratio is 111-114 boys per 100 girls, but spot checks show ratios of up to 156 boys per 100 girls in some locales [around New Delhi, for example]. For comparison, normal birth sex ratios are 105-107 boys born per 100 girls.” (Still debated in biologist circles, human beings apparently naturally create more boys than girls.) Courtesy of IHT article published in 2004. The disarming prospect of an overstretched economy, insufficient funding for retirement, fewer children (and fewer still women) to take care of the eldery — China’s main instrument of retirement — as well as the fact that the future wave of elderly will not have reached affluence (unlike today’s baby boomers), is bound to be a very heavy strain.

CO put in some good later rounds, however, reminding us that education is as gold as discipline.

* Higher education is on a fast track in China with 12 percent of senior high school graduates entering universities and colleges for further study in 2001, compared with 3.4 percent in 1990. There are now more than 4 million students at college or university in China, with an estimated half million Chinese students at higher education abroad.

* China provides universal health care. However, clearly, there are substantial cracks in the system, as witnessed by the Avian Flu issue, Hepatitis B (affecting est. 10% of the population), widespread smoking and escalating HIV/AIDS.

* China’s economy has averaged over 9% annual growth since 1978.

There it was, the end of the 9th round. Most people were still looking for CO to cruise to victory. The panel of famous international judges, including Hugo Capex, Harold Persons and Sly Dettor, were wringing their hands and shaking their heads. The arena was a buzz with chat. I know it seems odd, but zzzzzzzhangzu, I started to snore. So, I let you commentate the next rounds as I zzzzzzzzzzinzhua away at night.

I approached this particular post as if I were a universal (not exactly university) student starting out on a research paper. Aside from the content of this post — on which I freely invite comment — I am fascinated at how different is the process of research in today’s world compared to our traditional methods back when… Where appropriate, I have given a link rather than outright citation of credit. Not exactly scientific, but part of the web 2.0 of dealing with multiple sources. This post is not intended to be a definitive study, but a collection of some miscellaneous facts about China that lead me to be confused about the future, more than make me more entrenched. No doubt there is a silver lining or black cloud behind any number. And the above “match-up” limits itself to internal issues. Jokers in the future will include developments in Korea, Japan, as well as the role China takes on internationally once it has the measure of the world.
_________________________________________________________________