Hats off (if not off with the cuffs). This is, if it is to be believed (and it’s amateur enough to be believable), a great demonstration of how to work a crowd of rowdy male inmates [at the Cebu Provincial Detention and Rehabilitation Center (CPDRC) in the Philippines].

What’s great about this? Music, choreography, teamwork, creativity. And, there’s even a woman as a protagonist, so it must have helped motivate the thousand or so inmates. I can only start to imagine the decision making process and the arguments that accompanied putting this together. Kudos to the prison director. It’s a lesson in management. Lots of time on their hands. Lots of egos to bend. Lots of steps to lock. And a great result.

Furthermore, in that I have actually visited the inside of a prison (Bilibid) in Manila, Philippines, I can, with complete conviction, say that this Cebu prison is a fantastic performance. Bilibid prison (relatively recent photo right) was shocking for many reasons. The distance in the photo right masks the internal situation. 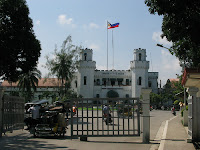 First, it is a prison for people waiting for court proceedings — therefore, not convicted. Some of the men, it was said, had been in Bilibid for more than a year, merely waiting for a court date. Second, the presence of gangs made for a very violent setting. As the head of the prison — who proudly gave us a private tour — told us, it was probably more dangerous on the inside than the outside. Third, the prison’s sick ward, which we also visited first hand, was infested with prisoners ill with many infectious diseases, including typhus, AIDS. Finally, and not least, the conditions were totally squalid — as one might have imagined a prison 100 years ago in a third world country. There was substantial overcrowding in both the women’s section as the men’s. In short, a breeding ground for disease and violence. No surprise that there have been many riots — and it’s worth noting that at the New Bilibid Prison, in Muntinlupa City, holding nearly 20,000 convicted criminals was the scene of substantial violence in 2006.

You might ask what I was doing visiting the prison? It was in the context of a visit, along with my father, brother-in-law and half-brother, to visit where my grandfather spent the last two and a half years of

his life as a POW of Japanese in the WWII. My grandfather was captured at Corregidor in May 1942 and spent some time in Bilibid right after his capture as well as the last few days before boarding the hellship, the Oryoku Maru, on which he died. I attach a photo of Bilibid in 1942 as well as a photo of the star shape overall design which still exists today (different gangs occupy different arms). I haven’t been able to verify if the Old Bilibid Prison is still being used. To be followed.