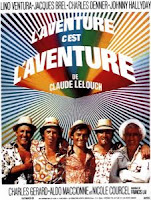 After our 7-day “yin” stint at Palmiye Club Med, we struck out for the “yang” part of our holidays, and headed for the airport of Antalya to rent a Ford Fusion (I had never heard of this model bef

ore…Seems I have no idea anymore about all the different car names, models...). At least all the bags fit neatly in the boot. This was the beginning of “une vraie bonne aventure.” The 7-day trip, which saw us rack up nearly 1,800 km, brought many surprises and stories.

Leaving Antalya airport at past 9pm, we headed north in search of dinner and a hotel. When the roadway became so sparse that high beams were the mainstay, we realized that hotels would not be so frequent. Indeed, at this point, we didn’t even know what the word for ‘hotel‘ was in Turkish. (Thanks to a reasonably strong French influence, many words are very recognizable; a hotel is ‘Otel’ in Turkish, so no big deal). For a while, we discussed the possibility of having to sleep in the car. The kids thought that would be fun…in a kind of Kafkaesque way. We reached Isparta at past 11pm and were fairly desperate to find a hotel, so we asked the first policeman we saw who plainly pointed across the street, where there were two vacant (Turkish 3*) options. A bed.

Having ‘checked in’, we had a late night family dinner (Kebap & salad + water for all 4 of us for the whopping price of 15 Turkish lira (or 8 euros). Hand signals, a few Turkish words, but above all, pictures in the menu helped with the process. Henceforth, we made a habit of eating local Turkish fare at Turkish (aka non-Tourist) prices. We became veritable masters by the end of the week. Among the quirky features I came to appreciate at these local restaurants was the rose-scented alcoholic cleanser they would squirt into your departing hands.

I will recount, henceforth, rather than a blow by blow journal, the most intriguing discoveries and commentaries throughout the week.

Wherever we went, from hamlet to city, the political campaigning was evident. On July 22, Turkey will hold a general election to vote in a new government. Charged with religious overtones, these elections could be critical, if not volatile, for the country’s future. I heard, and was disturbed by one comment, scary for its nonchalance: the Justice & Development Party (AKP) par 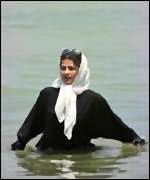 ty is only looking fundamentalist because of the over-zealous media. In the ten years that have elapsed since my first visit to Turkey, I clearly saw a difference in the (higher) number of women wearing veils. The construction of new mosques — likely compounded by the wide scale government-subsidized housing developments — marked many landscapes along the drive. Meanwhile, on the beaches, it was astounding to see women bathing in an adapted Hijab. I attach an example (left) of an Egyptian woman I found in a BBC article. Apparently, there is a whole fashion statement around this “bathing attire.” Each woman I saw in such a garb looked rather frumpy. Not exactly complimentary.

Another aspect that was a regular feature in small towns as much as in large cities were the internet cafes. Every time I passed one, the computer stalls were always jammed packed. And the access costs are among the lowest worldwide at USD$0.50/hour on average versus $0.60 in Ghana or $0.66 in Jakarta or, worse yet, $3.00 in Russia… and versus the highest in Sweden at $6.45.(#see below)

Driving over such distances, it would be natural to expand on the nature of Turkish driving. But, aside from the vigorous overtaking on mountainous roads and being held up for 30 minutes by a huge forest fire through which we drove with embers on both side of the road, I would rather point out a few of the oddities. First, it seemed like the number of bugs per kilometer we smushed on the windshield was higher than on any European roadtrip. Secondly, there was a marked lack of speed limit signs. When we asked a guide about what was the right speed, he replied that it depended on the policeman. Thirdly, [unleaded] petrol prices were decidedly high, typically around 2.95 lira/liter (or 1.68 euro), in a range of 2.62 to 3.04. Fourth, on several occasions when we filled up for petrol, we were offered gifts, including a free car wash. If we sometimes had difficulty finding an ‘otel’, there were certainly no lack of petrol stations. Competition is so stiff that the petrol stations are obliged to provide ‘extra goodies and services’ for free (spare kleenex, candy, window cleaning, etc.).

We visited many a mosque, a handful of museums and a few archaeological sites along the way. The most interesting mosque was Ulu Cami in Adana (right). Restored after a 1998 earthquake, this “Syrian style” mosque was very attractive, featuring a duo-colored minaret. Our speech-impeded guide, who only spoke Turkish, gave us a princely tour, including a laborious march up the minaret. We also particularly enjoyed the visit of the Konya Mevlana museum, the epicenter of the Whirling Dervish order.

One of the more memorable visits, meanwhile, was in Nigde at the market where we encountered the live chicken market. A car was literally loaded to gills with chickens (what a ride). Chicks abounded, running around in car
dboard boxes. Money for nothing, and your chicks for sale…

Speaking of birds, can’t resist coming back to the topic of the pigeon. In Cappadocia, we came across Pigeon Valley (right), reputed for attracting pigeons to use their defecation as fertilizer. A much mightier use than those droppings 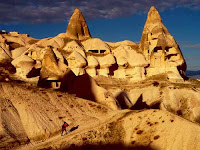 I referred to in a prior blog. The locals paint around the holes in the rock to attract pigeons to nest. Of course, on a more serious note, if you have kids–under 12 for example–visiting Cappadocia is a magnificent, if not magical, spot. Exploring the tunnels in the underground cities (6-8 stories underground) such as in Kaymakli or Derinkuyu that used to “house” up to 60,000 people is like a walk through Wonderland for the kids (if a little tortuous for anyone over 5’6…). This was the central theme to our holidays and the main reason we chose to come to Turkey. It turns out that Cappadocia was just one small part of a generally eye-opening and adventurous 1-week journey with so many other fun things to do and people to meet. I reserve a couple of juicy hotel critiques in Part 3.

A few more comments:
– Found that my German helped more than any other language when we went into the hinterland.
– Note to men, don’t forget to get a shave at the local barber’s at least once a week. It’s a real treat (and cost just 3 lira) with generally at least 5 different applications (mousse, oils, powder and more) and a massage.

##Report from BBC on 16 July: “The Organisation for Economic Co-operation and Development (OECD) report says 60% of its member countries net users are now on broadband. The report said countries that had switched to fibre networks had the best speeds at the lowest prices. In Japan net users have 100Mbps lines, 10 times higher than the OECD average. Japan’s price for broadband per megabit per second is the lowest in the OECD at $0.22 (0.11p), said the report. The most expensive is Turkey at $81.13 (£40.56). In the US, the cheapest megabit per second broadband connection is $3.18 (£1.59) while in the UK it is $3.62 (£1.81).”