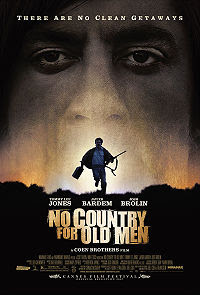 “No Country for Old Men” was one of two films that I saw on the plane from Dubai to Paris, both of which featured Vietnam veterans. And, I was totally surprised by the strength of this film since I hadn’t read up about the film ahead of time.

The New York-based Coen brothers (Joel and Ethan) have created a powerful film noir style that is masterfully applied to No Country for Old Men. Having just been on safari in Kenya, observing the ouster of the “older males” among various animal species, one is reminded of the pitiless nature of Nature.

Directors of Raising Arizona (whacked out comedy), The Man Who Wasn’t There (film noir) and the whimsical Barton Fink, the Coen brothers are returning to American cinema what generic Hollywood is taking away: superior plots, unpredictability and thought provocation.

No Country for Old Men, based on the novel by Cormac McCarthy (which I never read), was released in November 2007. Among the clever parts to this film is the ability to express extreme violence without necessarily showing it. And, among the finer surprises, evil is not vanquished…if anything, it is insidiously starified. And, with all three main characters’ lives intertwined yet rarely overlapping (physically), you never really know who the “hero” is. And the ending is designed to make you reflect. There is no gratuitous happy ending in NCFOM.

Featuring non-standard actors for Coen films, NCFOM has, all the same, a strong cast:

See here for a slew of other “official” reviews of the film (4.6/5 on average). Definitely a film to see when you are not feeling down, though.