Getting older every day…and more lonely?

This post is about two trends that seem to be crossing inexorably: the aging of populations around the world and the general lack of people taking care of this group.

If you feel like you are getting older, you are not alone. As the UN.org site says in a report published in 1999, “[g]lobally, the number of octogenarians is projected to increase to 311 million in 2050, 5.3 times its 1998 size.” In France, there are already well over a million people over 85 years old – a number that is projected to rise dramatically and quickly: to 2.2 million over 85 years old by 2015. The problem, according to an article in the Le Figaro of July 17, 2008, « Pénurie de main-d’œuvre pour les emplois de service, » is that there will not be enough people to care for the predictable increase of octogenarians… so you may be alone after all. 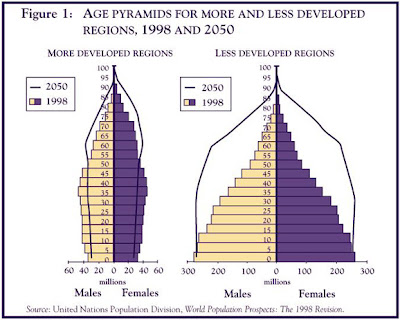 [Note the 2050 line in Figure 1 from the UN site, showing for the “more developed regions” that the women bulge is significantly higher/older than the men.]

Another notable example is Japan, where over half of the population will be over 65 years old in less than 50 years. In absolute figures, the UN study projects, “[f]ive countries will have 10 million or more people over 80 years old. They include China, which will have 100 million; India, 47 million; the United States, 27 million; Japan, 12 million; and Indonesia, 10 million.”

The aging of the populations around the world is obviously going to create new economies and business opportunities. While on a recent trip to England, I discovered an until-now-not-heard-of business regarding firms that specialize in hunting down heirs of recently deceased people whose “next of kin” is not identified or known.

This type of business exists AT LEAST in the US and UK and I assume in many other countries although I stopped short of doing a worldwide search. Out of LA in the US, there is HeirHuntersInternational.com. The HHI site comes replete with information on the company’s TV appearances (Court TV) and its own blog — quite a media spin. The percentage of the assets the surprised heir gives to the heir hunters is “negotiable.” Of course, the interesting challenge must be to declare to the prospective heir that the money/assets exist, but that the name of the deceased must be withheld until the signing of the contract. Apparently, the hunter’s rate is between 20% and 50%. What a business — a win/win except for the deceased who was more-or-less abandoned in the last part of his/her life.

As one of the HHI founders says in the Court TV session: “it’s a very, very competitive business,” which means that time is of the essence. And HHI is certainly not alone. A more “low key” heir hunter company in the US is “American Research Bureau” which does not like to advertise (and its site is exceedingly dull)… and perhaps with good reason. In the UK, you can find out about probate geneologists (aka heir hunters) Fraser & Fraser, or Finders UK, The BBC carries a series on Heir Hunters. The heir hunters don’t have a particularly good reason.

What the whole notion (or specter) of heir hunters fails to highlight is that there are so many people dying without their next of kin being aware: what does that say to family ties and the loneliness of the deceased? With the oncoming wave of octogenarians and the lack of personnel and family members to take care of them, it would seem that heir hunters [as well as caregivers] have a bright future. Of course, that assumes that the housing and stock market resumes its bull run some time soon!

Anyone else want to write about other great business opportunities?