We arrived in Kenya at Nairobi International airport on our holidays in May and, somewhat predictably, spent the first 30 minutes in a highly disorganized line up to get through customs. We had already purchased our tourist visas at the Kenyan Embassy in Paris only to find that you could do the same thing at the airport customs counter. In fact, buying the visa at the customs counter would have been quicker than the time we spent in the “regular” queue to have our passports stamped–much less when you add the two separate trips to the Kenyan Embassy in Paris. Our main confusion was that we didn’t know which queue to join. There was an empty counter for “All Other Nationals” and two other manned counters for “Kenyan nationals” and “East African Nationals.” When I think back on the customs lines in Paris’ CDG Roissy airport, I believe the confusion is probably comparable, but it is always more challenging to figure out in a foreign country.

Our guide, Ibrahim, met us outside the baggage claim. We then made a one-hour journey – through some back roads – to the house of my old Kenyan friend and schoolmate from the Old Malthouse (OMH), Martin Seth-Smith (Ker & Downey Safaris Kenya). Along the way to Martin’s, we were able to view the Kibera slums (which are the second largest slums in Africa and even more impoverished than the townships of Alexandria and Soweto in RSA). We had a wonderful evening reminiscing and catching up. The next day, we headed off at 8am, in a deluge of rain.

Our driver, Ibrahim, was a stalwart, serious and gracious man. Aged 68, Ibrahim presented himself more like a 50-55 year old. Having been a guide for 35 years, he knew all the roads well and safely steered us through our 6-day trip. Ibrahim, a Muslim, comes from the Kalenjin tribe (a tribe known for its long distance runners, and the tribe from which came Kenya’s second President, Mr. Daniel Arap Moi). Ibrahim described how he used to run 10 miles to and from school that was situated on top of a hill. 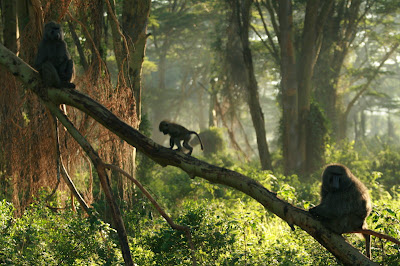 Among the marvellous experiences in Kenya, and despite being in the rainy season when animals are not migrating through Kenya, we managed to spot each of the Big Five, including a rare and fleeting view of a scampering leopard, as well as just one cheetah (one of the remaining 15,000 on this earth). While we were out looking for animals, I wanted to pick up a bit of Swahili. Cheetah in Swahili is Duma (the name of one of our most wonderful babysitters when we lived in Paris back when…). The cheetah can get to 45mph in 3 seconds and looks so approachable… Tricky.

At Mara Intrepids in the Maasai Mara (6 hours from Nairobi), the tented sleeping arrangement was a first for us all. Including the enormous hippo sounds that woke us in the early morning, it was a wonderful experience. Also, the children absolutely enjoyed the Maasai tribe induction where they were entertained morning and afternoon with bow & arrow making, Maasai clothing and dancing (or rather jumping vertically). The Mara Intrepids Camp was, all told, the best quality we experienced. 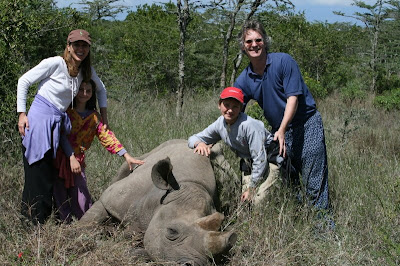 We did one night at the idyllic Sweetwater tented camp. The restaurant-side watering hole that attracted all forms of animals was a great spectacle. One highlight was the visit of Morani, (the Little Warrior) the tame black rhinoceros (photo to the right). A pleasant home video on Morani was done here on YouTube. We also did a 1 1/2 hour “night safari”, which, at the heady price of $80/person (including the kids), was a complete fiasco. Aside from the fact that the only animals we saw–that we were not able to see during the day–were one big white owl and 2 mongooses (or should that be mongeese). And, what other animals we saw, the one spot light lamp gave us a poor viewing. Of course, the hoped-for “hunt” was not to be had the evening we went out. But, the main problem with our ride was the impact of a rain shower that rendered the road into a skating rink. We got stuck in the mud twice and, with the jeep bucketing from right to left and back, our eyes were glued on the road rather than on any animals.Driving from camp to camp afforded us a view of the “inside” of Kenya as opposed to airplane hopping and just seeing the refined camps sites. This meant that we saw the poverty of rural Kenya, the hard working farmers, the lounging men, a woman carrying wooden benches (tied by rope and affixed around her forehead) and the enormous number of young children, many of whom were sitting on the side of the highway. There were even a few instances when I spotted machete-wielding children.

Driving on the roads of Kenya meant that we also saw the state of the infrastructure. Some of the roads were in such poor condition and so bumpy, it made picking your nose an extremely hazardous (if just as unsightly) habit. You also see the presence of police – there were police checkpoints roughly every 15 kilometers. We were stopped only once in the 7 days.

In another insight into the Kenyan way, on our way down to Amboseli, we had to make a stop at the Catalyst Travel Agency office in Nairobi to meet John, the “agent.” In an unfortunate and ungracious act, John (read: the boss) dropped 48 bottles of water on the street beside the jeep and obliged our guide to pick up the bottles without lifting a finger to help. An unnecessary humiliation

After our visit to Sweetwater, we made a brief stop at the Sweetwater Primary School, run by Mr Peter Bitaka. We met all the children and delivered a little care package. Education will be at the heart of progress in Kenya as in so many other developing countries.

Kenya, whose name was abridged from the Kikuyu name of Mount Kenya, Kiri Nyaga (“Mountain where God is”), boasts a population of 35 million people, up from 7 million 40 years ago. According to Wikipedia, the major ethnic groups of Kenya, which has 43 different tribes are as follows: Kikuyu 23%, Luhya 14%, Luo 13%, Kalenjin 11% (such as our guide Ibrahim), Kamba 10%, Kisii 6%, Meru 5%, Maasai 1.8%… I believe the 1.8% Maasai might be understated. In any event, driving through Maasai Mara, you obviously see mostly Maasai and, it would appear that it is a group that is growing fast. Non-Africans (Asian/Desi, Anglo-African/European, and Arab) amount to 1%. Refuting Wikipedia’s entry, I also believe that there are many more Indians, especially in the Mombassa region.

In terms of religions, Wikipedia lists the religious affiliations accordingly: Protestant and Quaker 45%, Roman Catholic 25%, Islam 10%, Traditional Religions 10%. Apparently, for those of you studying US social studies and the founding of Pennsylvania (like my son), Kenya actually contains the largest body of Quakers in a single nation.

While we went in the midst of the rainy season, we were lucky enough not to be dumped on too badly. There were few people in the lodges (the first three we were running at something between 30-40% occupancy). As for the political unrest, there was nothing to see. We were spoiled with views of Kilimanjaro on both days. A French journalist we met at Amboseli told us that there were many more animals to see in Tanzania. That did not stop us from seeing plenty of animals and enjoying our safari experience. However, next time, maybe we will head for the land of Zanzibar…