The Amazing Internet – Guest post by my father, Victor Dial

I know it’s a cliché, but isn’t it amazing what you can find on the internet? Two recent occasions come to mind:

The first was when, some days ago, I happened on a web site concerning the family of my paternal grandmother, whose maiden name was Josephine Minter. We called Josephine “Jou-Jou” (probably Josephine was too difficult for young children to pronounce, or remember). Jou-Jou’s mother’s maiden name was Fannie Dodson Ramseur. Fannie came from a prominent North Carolinian family, and she married Joseph Minter, also from North Carolina. The Minter family web site (wiki.abulsme.com) laconically indicates that Joseph had originally intended to marry another lady, but that the bride-to-be had died on her wedding day. This must have been a terrible tragedy for Joseph, but was fortunate for me, because by marrying Fannie, he begot me, as well as many other distinguished descendants. Fannie had six children (one of whom was Jou-Jou, of course) and, while pregnant with a seventh, died tragically while trying to save her youngest daughter whose dress had accidentally caught fire. The daughter died that day, 14 March 1881, and the mother ten days later, aged 36.

Jou-Jou married my grandfather, Nathaniel Barksdale Dial, a man born and bred in Laurens, South Carolina. They produced four children (two boys and two girls), one of whom was my father (Nathaniel Minter Dial, called “Minter”), also born in Laurens.

In reading about Fannie (Ramseur) Minter, I saw that she had a brother named Stephen 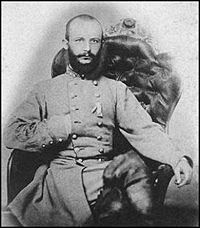 Dodson Ramseur (wikipedia writeup on SD Ramseur). Stephen was an early graduate of West Point (1860), and when the Civil War broke out in 1861, he promptly joined the Confederate Army as a Captain. Two years later, at age 25, he was appointed Brigadier General, and one year after that, Major General. In reading more about the history of my great-great uncle, I discovered that his closest aide was another North Carolinian, named William Ruffin Cox (wikipedia writeup/Secretary of the Senate), previously a lawyer by trade. When Ramseur was promoted to Major General, he handed over the troops under his command to Brigadier General Cox. When shortly thereafter the gallant Ramseur was killed in battle (in 1864), Cox again took over his command. Clearly, the destiny of these two men was tightly intertwined.

Why is this somewhat lengthy story of interest, you might well ask?

In 1928, my father (“Minter”) was accepted at the US Naval Academy at Annapolis. Southern gentlemen typically tended to stick together, and my father soon met most of his compatriots. One of them was a North Carolinian named William Ruffin Cox, who would become one of Minter’s life-long friends, and my beloved god-father. The two descendants of Minter’s great-uncle and of Ruffin’s grandfather were soon destined to become comrades in arms in a great war, once again.

The second occasion–as to why the internet is so amazing–came when I randomly checked to see whether the web was saying anything new about “Dial”. As usual, I found references to my grandfather, who served in the US Senate from 1919-1925. Then, I was amazed to stumble on a series of photographs of the Senator and the Senator’s children (example of one below), taken in May, 1922 in Washington DC by a photographer working for the National Photo Company, whose business it was to supply photographs to newspapers and magazines of the time. The entire collection of the National Photo Company was recently acquired by the Library of Congress (go to this link and type in DIAL), who then posted them on the ‘net for all to see. 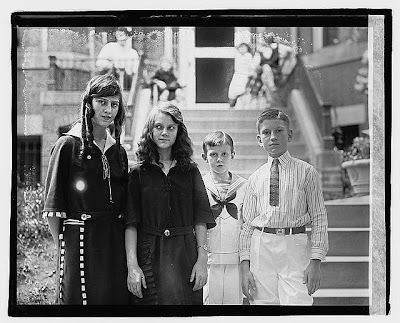 So here I found a number of long-forgotten photographs of my two aunts (aged 15 and 13), my father (only 11, but looking a lot older), and my uncle (8), posing variously with bicycles, tennis rackets, speedboats, and cars. (For more, see here a ‘100 year old photo blog’ called Shorpy.com; or Fannie getting ready for a debutante ball or on zazzle.com)