My friend Rodrigo (obrigado) sent me this link and I feel a compulsion to share it.

Below is a snapshot of a poll taken from over 49,000 people around the world currently casting their vote online. Many of the countries, granted have scant coverage, but in the mass, the results are quite remarkable. Naturally, the 122 million or so Americans who vote (as in 2004), the local of issues of economics, health care, education, etc., are not on the radar for the rest of the world. And, like any poll, it is only “intentional”. Moreover, you don’t see any abstentions or undecided. Nonetheless, the question is whether the international “vote” has any impact — and the answer is unfortunately no. Middle America is not preoccupied with the point of view of the rest of the world — too much like the current Administration.

In this poll, incidentally, there is presumably a nonrepresentational vote from 9,129 people (18% of the total in this online survey) in the USA, who are 80% in favour of Obama. That said, the role of the internet is increasing in every political campaign, so it will be interesting to review the numbers of the below poll as we get closer to the real vote — and more emphatically to follow how viral messages start to circulate to galvanize support within the US electorate.

http://iftheworldcouldvote.com/results [now defunct] as of September 20, 2008 at 8am Paris Time.

Countries with a reasonably significant number of voters (ie above 60) where the proportion selecting McCain is higher include:

Czech Republic 42%
Venezuela 33%
Poland 28%
And, it would seem that the former USSR states are a little more right wing.

Another notion that is striking in this online survey are the countries with the largest number of voters (absolute numbers as of this morning).

Below is what it would look like if the world could vote in the presidential election, with the blue for Obama and the red for McCain. 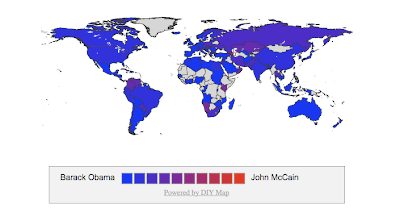 Or again on Facebook: If the world could vote!