I have written in the past that the Philippines placed highly (6th) in the World Economic Forum 2008 global gender gap ranking. The report says in the latest publication:

“…The Philippines is one of two countries in Asia to have closed the gender gap on both education and health and is one of only eleven in the world to have done so. However, the Philippines’s score relative to its performance in 2007 fell due to a drop in the perceived wage equality between women and men employed in similar positions and a decrease in the percentage of women ministers [to 10%].”

It would seem that this high ranking was largely favoured by the female President (the second Filipina President in its history) and the good representation of girls/women in school at every level. I also wonder about the impact of the relative earning power of Filipinas abroad who, with even numbers, send in $18B versus $32B for men (OFW statistics). After my visit to the Philippines over the Christmas holidays, I can make a few more observations. 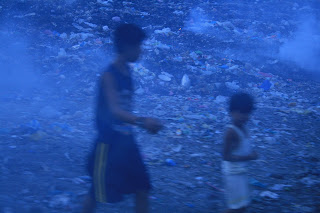 First, courtesy of my kind acquaintance Charlie Avila, I learned that 57% of the Filipino university students are women. Second, just by circulating around Manila, you can see that women very clearly have an active role in business. That said, in this activity, there is a traditional division of labour (e.g. 99.9% of jeepney and tricycle drivers are men; while, for the women, there is obviously a lot of childbearing and rearing) and, outside of Manila, the ‘latin’ machista culture dominates. And, third, during our stay in the Philippines, I read how the government signed into law the so-called Magna Carta of Women, presumably promoted by the relatively large representation of women in parliament. In the Lower chamber, there are 49 out of 240 (20.4%) women elected, while there are 4 out of 24 (16.7%) in the Upper chamber. The ‘Magna Carta for Women’ bill (#4273) seeks to provide women equal treatment before the law, equal access to information and services related to women’s health, and equal rights in all matters relating to marriage and family relations. The cynic would say that if they need to create a law, there must be good reason for its need.

Nonetheless, although I would like to believe so, women’s equality is not necessarily tantamount to progress. Since my first visit to the Philippines in 2004, I have observed little progress in the Philippines. The standout difference is perhaps the Subic-Clark-Tarlac dual carriage tollway (funded by the Japanese). Otherwise, the infrastructure and travelling conditions remain difficult–opportunities to break the speed limit (60kph) are exceedingly rare. Driving around the countryside, you are besieged by the 3rd World poverty (cf kids playing in the burning trash). People seem either to be mulling about doing absolutely nothing or on the move going absolutely anywhere. Any transportation is optimized; single drivers are an oddity. Passengers ride on the roof or hanging out the side. Cities are chockerblock with tricycles, bicycles and jeepneys. And the forms of transportation are quite inventive. You will see rice thresher contraptions and a “skylab” (down south, pictured above right) consisting of a balancing beam placed perpendicularly behind a bicycle/motorcycle with equal portions of people on either side. You can hardly fall asleep at the wheel thanks to the ingrained–if poor–driving habits and continuous overtaking.

As a testament to the constant to and fro’ movement of the people — and semantically revealing — the typical greeting in tagalog is “saan ka pupunta” meaning ‘where are you going?’ Another common greeting is “saan ka galing” meaning ‘where are you coming from?’ In terms of an answer to this greeting, you can say eith
er “diyan” (just there) or “doon” (doh-on, yonder/over there). 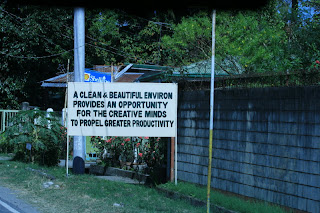 Signposts, and I am not referring to the names of towns, lead the way. There are signs calling for healthier (washing hands, drinking clean water, etc.) and greener

(no trash, less water waste…) living; others invoking God and revoking drugs in the same breath; yet others demanding to stop abuse of children and/or women. All these signs, of course, are mixed in with a robust cocktail of commercial enterprise. And, yet, the progress seems slow.As Charlie said, it seems that the Philippines suffer the instability of stability (as opposed to Italy which finds stability through instability). Part of the challenge evidently lies in the continuing stranglehold of the top 100 families who stubbornly refuse to yield. A defining Filipino saying is, roughly translated, Filipinos have “a loud but short fizzle” — the firecracker (a national pastime over New Year’s eve) is a good metaphor for the Filipino character. After the smoke, not much has changed. And yet, the success of Filipinos overseas, one of, if not the largest diaspora (11 million or around 11% of its population) in the world is paradoxical. Beyond the Overseas Filipino Workers (OFW) in Dubai or the Filipinas that set the standard for domestic help around the world, there are ample cases of successful Filipino professionals (medical technicians, engineers, etc.).From my various conversations, it would seem that the Filipino education system has taken it on the chin in recent years. An experiment to convert the curriculum entirely to Tagalog lasted a couple of years, but has had a lasting negative impact on English literacy levels. What was once a sizeable competitive advantage — wide ranging English fluency — has decreased without compensation in any other form.The other calamity is the growing strength of the “other” Filipinos occupying the southern islands, particularly Mindanao. Aside from hurting what is already a diminutive tourism, there seems to be a real schism between the predominant Catholic Filipinos and the Muslim population in the south.

To overcome the handicap of the terrain and climate and its reliance on the centralizing, megapolis capital (12-15 million), the Philippines will need to overhaul its education system (as is the case, that said, for so many countries) and invest in its infrastructure (none more so than in Manila itself). With its pro-Western stance, the large and growing population and the generally genial charm of the Filipinos, there is much potential for this country. Will have to come back in another ten years to see how it all transpires.