For our six-day visit to Marrakesh (or Marrakech if you prefer) en famille, we stayed at the not-even-opened Beldi Country Club Hotel (+212 (0)624-38-3950), on the route to Amizmiz, in Chérifia just 6 kilometres outside of Marrakesh.  Founded by Jean-Dominique Leymarie, the hotel is charm personified with a magnificent rose garden, splendid views of the Atlas mountain range (on clear days at least) and an entire infrastructure built from scratch using only local artists and talent. There are also myriad little cozy rooms in which to go and lounge about. 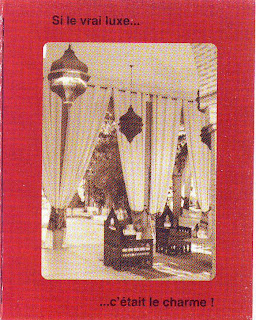 If the pools are not heated (a tad chilly for the April climate) and the tennis pro was more of a tennis am (as in pro-amateur), the lunchtime scene at le Palmier Fou around the Beldi’s southern pool was very Marrakesh haute société. The rooms are well done with lovely little details (cushy towels, soft cotton sheets and local “green” shampoo and body cleanser). The kids took advantage of some pottery classes (although 100 dirham per child per hour was a rather steep rate) with a transplanted Chilean artist. We benefited from the clay tennis court that was “unveiled” the morning of our arrival.  A second court is under construction.

Every day, we went into Marrakesh, visiting the hotspots as identified in the “Guide du Routard” including the visit of the trilogy of sites: Museum of Marrakesh in a 19th century traditional mansion, the Ben Youssef Medersa Koranic school, and some antique latrines.

On the 12th century latrines, one can literally take a pass. Not wanting to take the piss out of the historic site, there is not much to see here. The latrine’s explanatory board itself is almost out of sight. The visit of the 16th century Koranic school, on the other hand, is very worthwhile, especially to see the mosaics and lovely latticework in the stone and wood. Schooling up to 900 students at one point, this medersa is the largest in North Africa.

The stroll through the Medina souk with the jabs, taunts and enticements of the veritable carpet sellers does not diminish in stress over time. If this was my third visit to Marrakesh, the harassment in the winding souk is no easier to deal with. Yet, the magical buzz and clamour on the Place Jemaâ El Fna is no less enchanting than before. Between the snake charmers, the imprisoned monkeys and the charlatan magicians, the experience is remarkable. I can only imagine the strong imprint on the children’s minds.

We were spoiled by being invited to dinner in an absolutely magnificent Riad just outside the walls of the Medina, west of Marrakesh. The grandeur of the open skies, the multiple coves hidden away in the many corners, the ex-harem’s quarters and exquisite kilims, not to mention the wonderful food, made for a most memorable evening.  (Thank you to our local hosts) 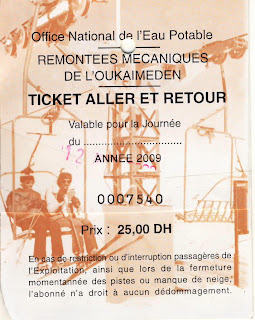 We made a number day trips, too.  We hit the valley of Ourika on two occasions. The first was tempered by heavy fog and rain, so we scrambled home to find the sunshine decorating our Beldi temporary residence. On the second – and substantially more successful – visit, we hit the town of Ourika (views), Oukaimeden mountain (skiing) and the village of Ourtes (lunch). The standout experience was surely the chairlift up the Oukaimeden mountain (3,200 metres peak), situated just 75 kilometres from Marrakesh. It was April 12th and we saw some thirty or so Moroccans swishing through the slush in equipment dating back to the end of the 20th century. Most authentic. The chairlift (25 dirhams per person round trip) is operated by the “Office National de l’Eau Potable,” translated to the National Office of Drinking Water. The ticket (see left) warns you that, in the case of stoppage or temporary closing of the slopes, you have no recourse on your 25 dirhams. While extremely slow, the ride was peaceful and offered some great views on the way back down.  Hard to believe that in April, you can ski in Morocco, but we have unadulterated proof. Nonetheless, not much would have tempted us to rent the archaic equipment to struggle through the thickest, wettest snow you are likely to see.

We took the kids to the water park Oasiria (route d’Amizmiz), run by a man from Toulouse, to enjoy the local attraction along with a mixture of French and well-to-do Moroccans. On balance, there were not many people and there were certainly no lines for any of the rides. Oscar (12) enjoyed the “camel” ride, a booming water slide.  On the downside, the wave pool takes 15 minutes to generate its waves. Unless you know people, you can’t last much more than four hours, especially if the weather is not too warm (only one heated pool).

I will write again with a review of food (part 2) and some commentary on Morocco (part 3)!  Watch this space.  In the meantime, your comments are, as ever, welcome.