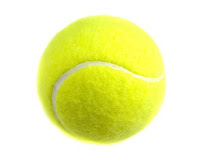 This year, Roland Garros and the French Federation of Tennis (FFT) have launched a programme (“Operation Balle Jaune“) to recycle the used tennis balls as part of a Sustainable Development program.  There are 14 million balls sold every year in France and, according to a 2007 survey by Science & Vie, tennis is the fifth most polluting sport.  I was unable to find that survey, but I would love to know the top 4.

In any event, the idea is to collect the used tennis balls, grind them up and create a sort of spongy material….  With 59 grams of felt and rubber per ball, it takes 40,000 balls to create a 100m2 rubberised flooring (similar to the surface of a tartan track), very useful for handicap sports among others.

On top of the 14 million balls sold in France annually, there are also some 3-4 million cans (or tube containers) in France alone.  If I were to make a rough calculation (based on the number of balls per pop) for Europe, Australia/NZ and North America where the bulk of the world’s tennis takes place, that would mean that there are around 300 million tennis balls inserted into our western world; noting that 90% of the balls are produced in Asia (not the heart of tennis land).  In terms of weight, those 300 million balls represent around 20 million tonnes of long-lasting rubber and felt in our landfills (including the tubes).

In the USA, there is a company called Rebounces, founded by Bill Dirst, which has figured out how to “recharge” an used tennis ball.  Rebounces got a good plug in Oprah in the June 2009 issue.  According to Wikipedia, since 2001, “[the 36,000 tennis] Balls from The Championships, Wimbledon are now recycled to provide field homes for the nationally threatened harvest mouse.”  You can read about the original news story here on the BBC.

Meanwhile, doing a little research on the web, I have found a few other fun ways to use the used tennis balls, beyond the feet of chairs, etc.  Herewith a selection for your pleasure and inspiration. 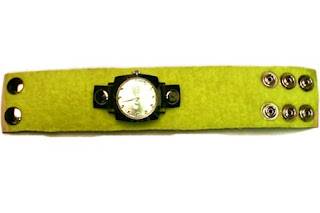 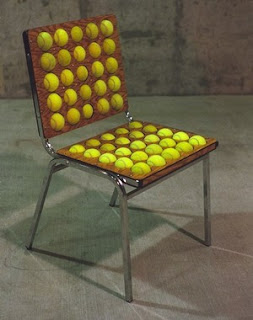 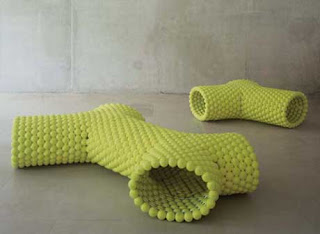 In any event, I think it is a good initiative that the French Federation of Tennis has taken on.  May the balls bounce on a little longer!