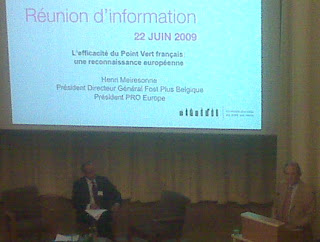 Henrie Meiresonne, CEO of Fost Plus Belgium and newly appointed President of PRO Europe, gave a speech in Paris on June 22, 2009, regarding the efficiency and effectiveness of the Green Dot (“Grüne Punkt” or “point vert”) in France.  Here are some of the interesting points and facts raised by Mr Meiresonne:

1. There are 22 million tonnes of recycled materials in Europe each year.  This represents 27 million tonnes of CO2, or the equivalent of 8 million middle sized cars, or 11 million passengers going round-trip Paris-New York.

2.  Mr Meiresonne explained that the success of a recycling programme is measured along two criteria: the penetration of recycling as well as the cost of doing so.  Since 1994, recycling has tripled in France and the cost of recycling is lower today than it was in 1994.  In France, 95% of all packaging have the Green Dot and Eco-Emballage (the organisation in France responsible for recycling all household refuse) manages to cover 95% of the French territory in terms of recuperating recyclable waste.  The cost of the Eco-Emballage recycling system is evaluated at less than 7 euros per year per inhabitant.  In Belgium, the cost is closer to 5,50 euros per person, whereas in Germany the price is closer to 17 euros.  In Holland, the tax is 21 euros/pp, while at the bottom of the proverbial barrel, Denmark, the cost is 26 euros per inhabitant.

3. Mr Meiresonne is completely opposed to the system of “returnable” cans for a small coin (which exists, for example, in the USA).   He underscored the expense and the negative CO2 footprint of such a “consignment” system.  And, one can certainly see his point if each consumer has to drive back to recuperate the nickels and dimes.

4. In terms of penetration of household recycling, France manages to recuperate 70% of the packaging for recycling.  Belgium is at 90%!  One could say that it is time for some healthy competition between recycling organizations.  Chief among the reasons for the Belgian success, according to Meiresonne, is that there are only 39 inter-municipal offices in Belgium (for a population of 10 million) as opposed to 1,300 communes in France (62 million pop).  This might provide another justification for Sarkozy to rationalise the number of local bureaucracies.

Meiresonne’s final comments were to encourage eco-conception to diminish the amount of plastic used in packaging (i.e. at the source), to find solutions for more a cost efficient recuperation of waste, and also to avoid price wars on recycled materials (I inferred here he was referring to the dramatic price drop of PCR paper, aluminium, etc., which has occurred since the recession settled in).