Not that it is supposed to be ironic, but below is a grey newspaper clipping with dark grey text, shaded columns and a light grey contour on a white background… Lots of nuances in those greys! Take a look at the graphic below, which is taken from the Herald Tribune of October 16, 2010 (source is the UN Population Division, assuming medium fertility in each of the countries).  It is perhaps a concept with which we are all familiar; but, a picture can tell a thousand words, literally.

This snapshot forecast of the aging of the world is quite powerful.  If the six lines are all sloping upward, the two that truly get my attention are the near meteoric rises of China and Japan, with China’s acceleration starting now.  If India, China and Japan all had around 7-8% of their population over 60 years old in 1950, that number will be 20% for India, 31% in China and 44% in Japan just one hundred years later.   Note that France will lie just above China, second in this list of six countries (making these recent manifestations and strikes against raising the age of retirement — from 60 to 62 — just a little less palatable). 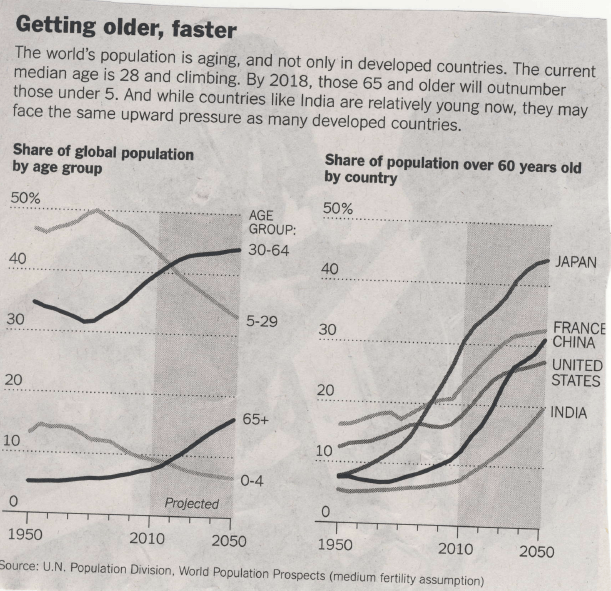 For India and China, the numbers in absolute terms are astounding.  Notwithstanding the economic burden related to increased health care costs and retirement benefits (good luck France!) etc., I am led to think about the massive shift in social behavior and the necessary changes in the physical environment that will accompany this shift: easier entry into cars for the less agile, easier to read and larger keys on keyboards and smartphones, more ergonomic door knobs for arthritic hands, etc.

The strain on the younger people will be significant in many ways.  On top of that comes the pall of global warming and protracted difficult economic times.  Enough to make us crawl back into our holes…and start procreating rampantly?  I don’t know, but hopefully the grey hairs will beget lots of grey matter that will help whiten the dark hole that we seem to be digging for ourselves.

Your thoughts and comments, as always, are welcome!