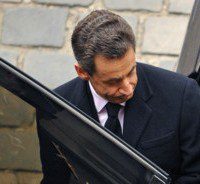 Have you thought about what ex-President Sarkozy is up to these days?  After losing a Presidential election, what is there left for a citizen to want to do? Most people, at that point, would concede having reached a pinnacle.  Similarly, upon retirement, the CEO of a FTSE100, CAC40 or DJ30 might feel that they have reached the summit of business.

In this post, I do not intend to explore what or if a CEO or President should or could do after quitting.  Rather, I wanted to look at how a person adapts or metamorphoses after such a change. To what extent was the President or CEO operating as him or herself when in power? And to what extent will they become another person upon being relieved of their position?

The evil of artifice

At issue: the artifice of a person in a position of importance.

In a world where people are decidedly malcontent at work, the notion of personal congruency is vital.  It is vital because the closer an individual is to the de facto values of a brand and/or organization, the more energetic and passionate that individual will naturally be.  Not everyone can make a living working in or with his/her passion.  However, it is possible to find greater alignment and/or make peace with one’s condition.  For many, the missing piece is knowing oneself better and knowing what actually turns one on.  In the absence of such, one often looks for role models.  But, too often, the CEO does not play that role.  He/she does not inspire.  He/she does not instill trust.  He/she is living in some form of artifice, disconnected with his or herself.  This lack of coherence and integrity inevitably weighs on the strength of conviction and the leader’s tone of encouragement, and can even encroach on the clarity of vision.

The litmus test that I wanted to explore was whether or not the CEO is consistent with him or herself post assignment.  Or does the CEO suddenly move from being a tyrant to become a “nice” man?  When I hear a CEO being described as ‘actually really charming’ outside of work, I cannot help but believe that the environment at work is likely to be wrong. 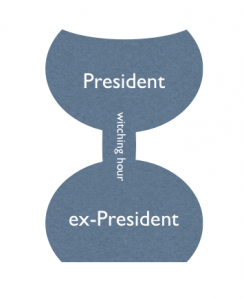 Because we are conditioned to take example from the top down, the CEO’s role takes all its importance.  A CEO is constantly faced with tough decisions.  What place instinct and intuition play in these decisions is up for debate.  However, when a leader is aligned with the values and mission of the brand/company, decisions are materially easier to take.  It strikes me as only natural that the big boss model and incarnate the values of the brand.   The challenge is being able to do so in a natural — dare I say authentic — manner?

What got me thinking of this whole subject is ex-President Sarkozy, now that he is a “free” man.  How often in his daily life post-Presidency is Sarkozy acting and operating in the same way as when he was President?  For example, in what manner does his speak in private about the French electorate?  Does he consider them with equal, less or more disdain than before?  Or, for all the times one saw him riding a bicycle (to give the image of an ordinary French citizen) or jogging (image of a fit man), does he continue with the same intent and verve?   The biggest problem with Sarkozy was, probably, that he was too close to his real personality and not “presidential enough.”  He was considered too caustic, too bling bling (as the French say) and too hands on.  President Sarkozy was not the image that the French electorate wished to represent its country.  Thus, he was ousted.  An error in casting, some would argue.

In a business context, however, the CEO is not a democratically elected individual.  Being CEO is not a popularity contest.  Ironically, all the same, a CEO is obliged to prove his/her performance on a daily basis to a wide range of stakeholders – namely shareholders, customers and employees.  In business, there is a daily need to be accountable, literally.  While some political systems allow for a daily vocal questioning of government, the truth is that nothing is more searing than daily sales & profit report.  The CEO must find a way to establish trust with his/her stakeholders.  This is most effectively gained through reliable communication and, admittedly to varying degrees, transparency.

Different from transparency, however, the real issue for me is consistency, congruency and authenticity.  Leaders today must also be selected for their ability to represent the brand.  It is indeed a lot to ask of an individual to provide vision, have the courage to take hard decisions and possess the personality to incarnate the brand and inspire the people.  But, that is why I believe the excellent CEO is absolutely worth the big bucks.  Only problem, so many of the big bosses do not manage to provide all three characteristics.

What do you think?  Is it relevant for a leader to be the same person at work as at home or in his/her retirement?