On and Offline … in harmony

The House of Fraser on Oxford Street (London) broadcast over a two-day period that it was doing an in store (offline) and online promotion. By all appearances, it seemed like a perfect case of blended marketing. So, I was happy to test the waters.  Below was the call out at the entrance of the store: “2 Day Brand Event…  In Store and Online.”  Very clear. 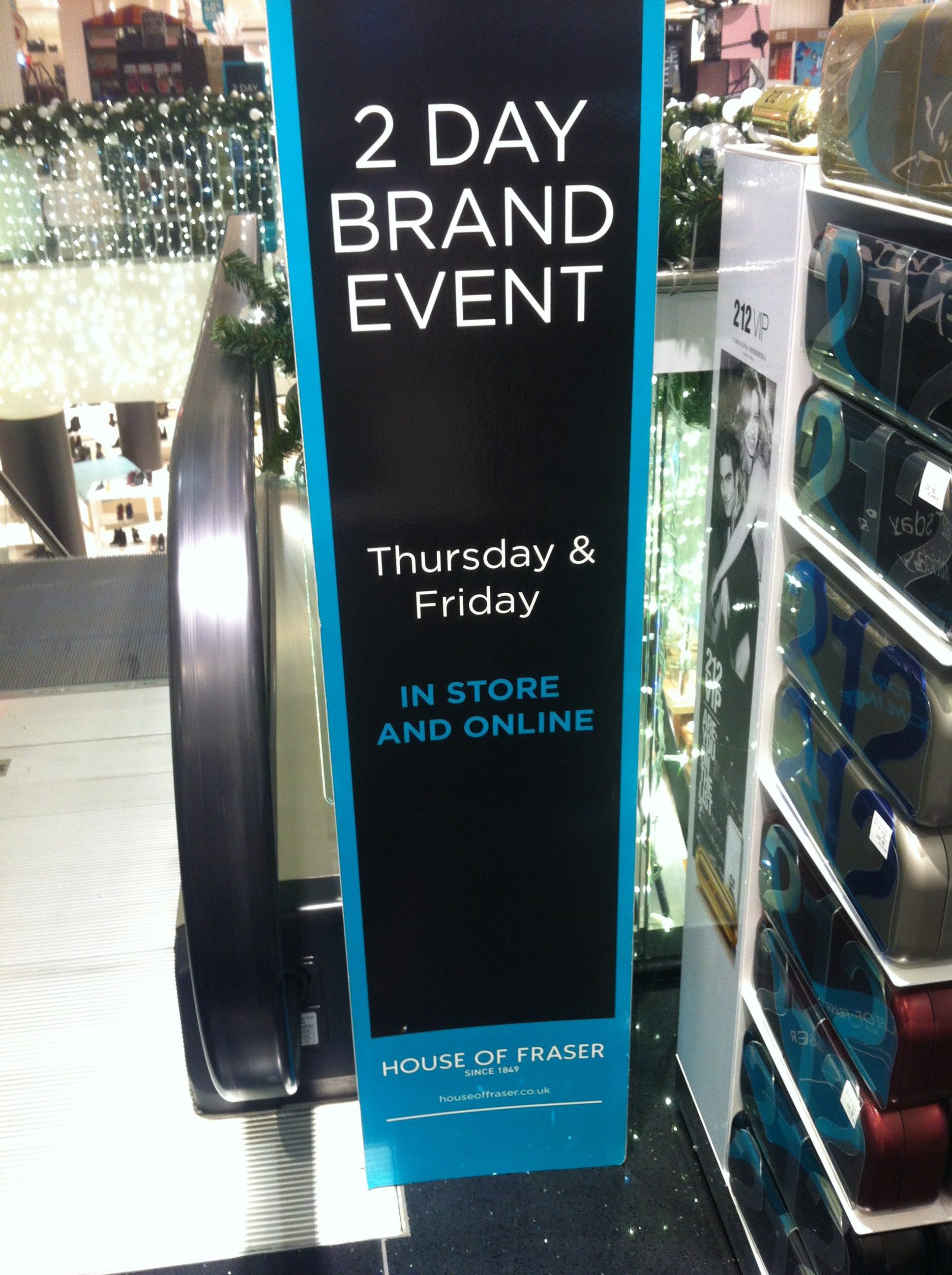 I went in to the store and came across the very fashionable Mary Portas line.  I found a charming little handbag (bottom left of the photo below) that was priced at 40% off.  Rather than the list price of £39.00, you could buy it on shelf for £27.85 (you can’t see the sticker which is tucked behind the 40% off sign).  It seemed to me a veritable steal? 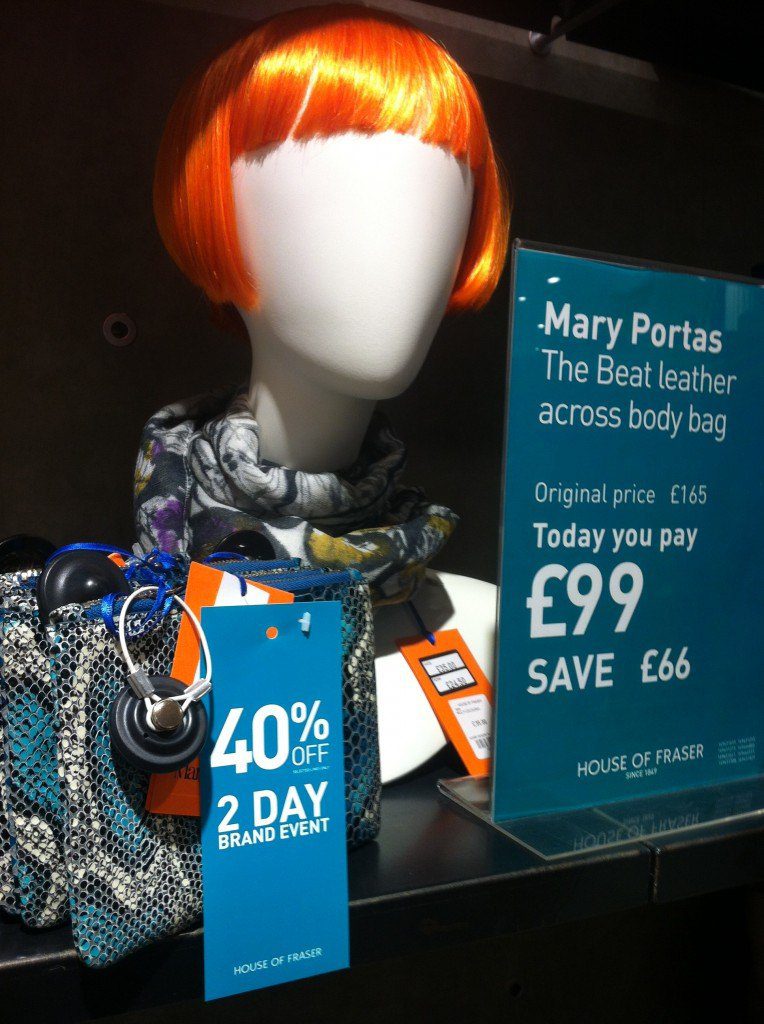 But, in the spirit of the blended promotion that was both in store and online, I just thought I’d check what was going on at the House of Fraser web site.  As it turned out, they had done a very good job with their SEM, making sure that House of Fraser was on top at the same time as the promotion was going on (see right).  I thought that was jolly well played.  Naturally, I wanted to find the Mary Portas handbag as well… So, I clicked through and found a dedicated section on the promoted items and, in particular, the exact same bag.  Here is what I found…  Can you spot the problem? 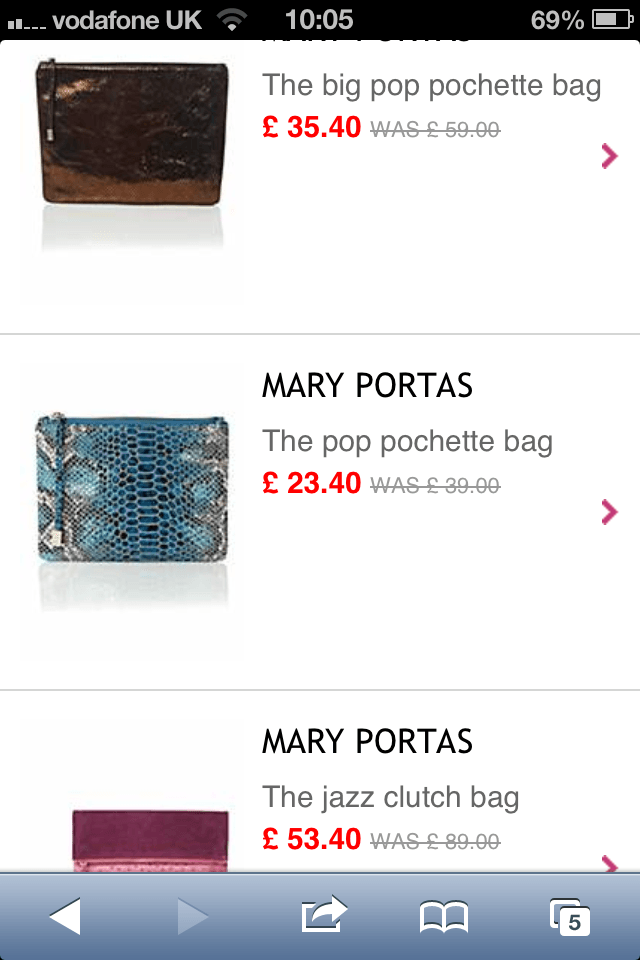 Well, yes, the online price was £23.40, rather than the £27.85 in store.  In other words, someone had not remembered how to calculate 40% off.  In store, they had used 39/1.40 (incorrect) which equated to less than 30% off.  Online, they had done 39×0.60 (correct). When I went back to the store on Day 2 of the Sale, the price in store had been corrected and aligned with the price online.  The store personnel had had to rip off the original tags and create new in store pricing (hence why I wasn’t able to snag a photo of the wrong ticket price).  It wasn’t a very elegant solution, but I’m sure someone in HQ got an earful.

Blended Marketing – in pursuit of the seamless on and offline experience

Blended marketing should be a natural reflex.  In the near future, we will no longer differentiate between digital marketing and “traditional” marketing, at least no more than we would distinguish between TV and magazine advertising.  Obviously, we still have a way to go before teams are aligned with that concept, otherwise we would have pricing that is aligned, especially for a promotion that is broadcast as being online and in store!  Consumers are checking online as a reflex.  Shouldn’t all store personnel have the same reflex (or be guided to have it)?

Have you spotted other such blunders?