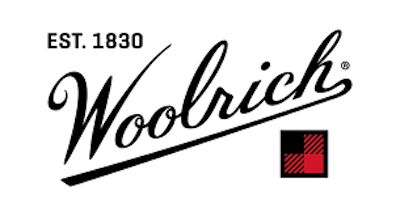 You would imagine that Woolrich, the outdoors clothing company that was started in Woolrich PA in 1830, is steeped in tradition, values and history. They have, after all, survived this long. And what of their branding? I found them with an implantation in the noteworthy Parisian department store, Le Printemps, and did a little prodding around.

The company is a family-run business, boasting a 7th-generation President after 175 years of existence. For a brand out of a little Pennsylvania town, they have done remarkably well. In terms of product price point, they sell parkas for $1,000. They have just three dedicated (owned) retail stores in the US, but are otherwise distributed in major retailers.* On their website, they demonstrate their history with a swift and simple sliding timeline. In a sign of what I’d call “new management promoting itself,” the timeline is heavily loaded with “historical dates” in the last 10 years. For an “old” company, they were quick to adopt the Web. Their online commerce-ready site was launched in 2000-2001.

Branding – Not Dyed in the Wool?

If branding and sheep would seem like a happy couple, Woolrich’s brand itself is a little meagre. As far as online branding goes, Woolrich’s site is particularly empty. What does Woolrich stand for, other than “since 1830”? For example, there is no tagline. The codes of the site are basic white and black. There is zero representation of the brand’s values on the site. And yet they would appear to exist as I found out in Paris.

For such a niche US brand, it was not without surprise that I found Woolrich distributed in Paris in an upscale department store. To be sure, their retail space in Le Printemps didn’t stand out particularly. It was just another brand in a long procession of brands on the shop floor. Except there was one thing that stood out: I found on the carpet of their retail space the brand’s values marked … in English. And what an English it is too!

The eleven values or perhaps I should say declarations of Woolrich are:

Without context, these 11 declarations seem a little lost. Moreover, the fact that they have not been translated into French must mean the local staff and local clientele typically walk right by them! Altogether, the carpeted values look more like a bird-brained idea out of the resource-restrained marketing department. A few things, however, caught my eye about this list.

Putting Values Down – The Plus and Minuses

Often they say if you have to publish your values, then they don’t actually exist. Personally, I don’t subscribe to that point of view. I believe it’s great to do the exercise of putting words to page and to publicise your professed values and commitments. On the positive side, among the eleven statements, I very much applaud the strong focus on employees Click To Tweet (#1, #2 and #6).

Here’s what I like less about these particular eleven values:

Having your values out in the open is an honourable idea. Click To Tweet But they ought to go much further. At a minimum, why not have them on the website at the same time. More importantly, values are there to be lived. The store staff were quite oblivious to the words on the floor.

However, when doing the exercise on values, there ought to be fewer and they should be expressed in a tighter manner. For example, I might have written: Satisfied employees is the key to satisfied customers! Click To Tweet

Throughout the Value Chain

To the extent you have brand values, they must be felt and understood by the entire value chain, Click To Tweet including the employee, customer and third parties. In any event, branding is not just about marking (or marketing) what you are about. Branding is about unifying all the relevant actors and stakeholders around a common set of de facto behaviours and beliefs. Click To Tweet And when you are writing such values on the carpet in a multi-brand wholesaler, the chances of having a consistent rendition of these values is next to nil.

* P.S. According to their site (which seems not to have been updated since 2015), Woolrich has stores in 8 countries around the world. But, I note that they have not included on their site for their distributor partners — so anyone going on their site in France won’t know about the availability at Le Printemps, Galeries Lafayettes or Le Bon Marché. Oh dear.