Centrist Emmanuel Macron has been crowned President of France. He soundly beat the far right Marine Le Pen (65%-35%). If it wasn’t the thrashing Monsieur JM Le Pen (Marine’s father) received at the hands of Jacques Chirac in 2002, when Chirac won 82%-18%, it was a solid margin of victory for Macron. However, while the purpose of this article is not to make political commentary, one can say that the presidential election is just a skirmish compared to what lies ahead for Macron and France. Moreover, if you look at the record level of “white votes” (8.9%) and abstention (25.3%), in fact, one can conclude that he got well under half (c 44%) of the electorate to vote for him.

Defining a vision… that includes digital?

Among the strategic challenges for Macron’s new France is defining the vision that will lead to material change and the progress so desired. This vision will inevitably mean making some hard choices. For example, Macron will need to be radical in deciding on which sectors and pillars France must base their future economy. For the youth of France, this election must have felt like a make-or-break vote on their future. As such, it must have been rather disconcerting how little the digital economy — and new tech — were part of any presidential platform or part of the discussion. In the first round on April 23, the younger voters in France sent a rather bleak message to the institutions of France as reported by Yascha Mounk in Slate: “Among older voters, fewer than 1 in 5 supported Mélenchon or Le Pen. Among younger voters, more than 1 in 2 did.” In this graphic below from Mathieu Gallard at IPSOS, you can see that Macron only ‘won’ for the 25-34 year olds. 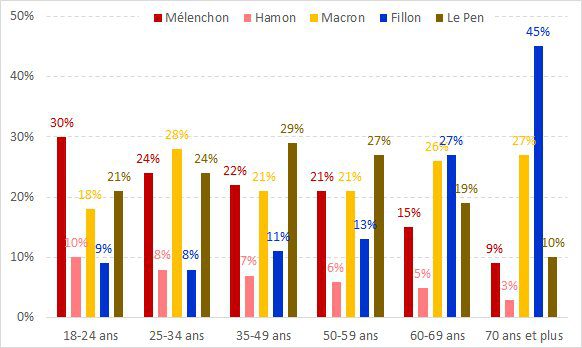 Mounk warns, “This [result] suggests that we may have learned the wrong lesson from Trump’s relative lack of support among young Americans: It didn’t show that the young aren’t open to populism, but rather that Trump is not especially attractive to the young.” Updated: In the second round, the results according to a Sondage Pop on May 7th, showed that Macron didn’t do so badly in the younger tranches. The main difference is that Mélenchon definitely was the more popular populist among the youth — and that same youth voted massively for Macron rather than Le Pen. 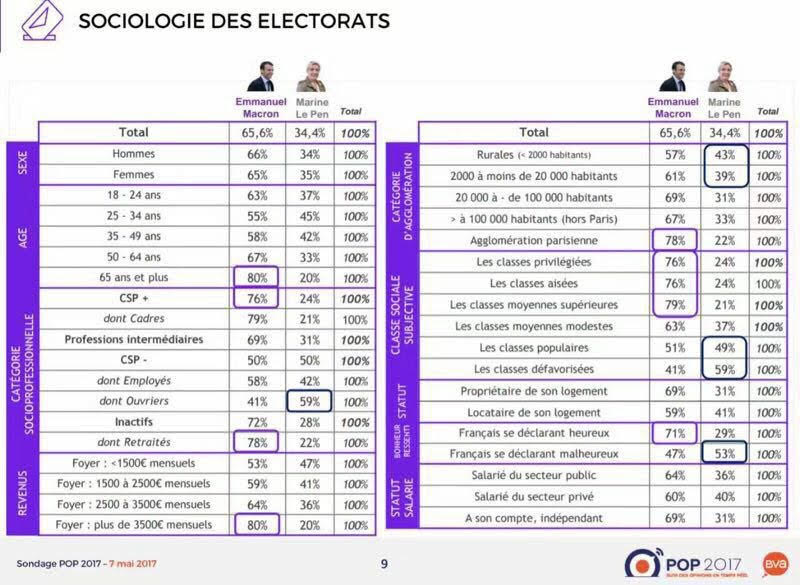 Since the younger generations are more tech savvy and more present on the Internet, you would have thought social media would have been a key component to the elections. Not that any the French presidential candidates need to follow Trump’s exaggerated example, one must believe that social media is, in any event, an important way for a candidate to show his or her true colors beyond a televised debate? If France did get behind Macron, there was certainly a lot of relief expressed in his victory, not just in France. On Twitter, in the hour after his victory, it was reported in Le Figaro that the hashtag #presidentielle2017 was used 263,900 times. Meanwhile, there are almost the same number who have signed up on Facebook for the drinks party to celebrate when Macron will leave the Elysée in 2022.

It is in this context that I took a closer look at the ways that the Macron and Le Pen teams managed their social media presence. Thanks to the good folk at Brandwatch (social intelligence), I was able to parse out some interesting data. First, a quick overview of social media usage by sex and age in France according to eMarketer data in 4Q2015: 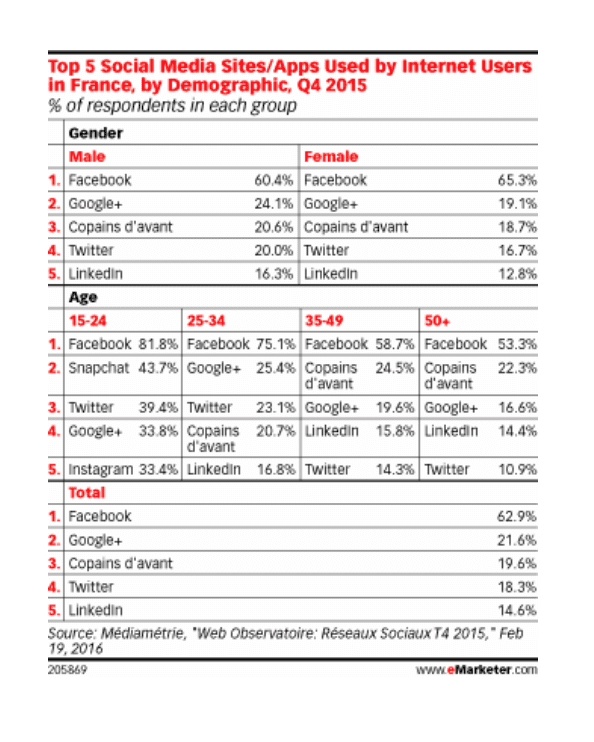 One can see that social media usage drops off significantly after 35 years old. Facebook skews more female, while all the other top four are more popular among males. Twitter sits at 18% of all French internet users, with 20.0% male and 16.7% female. During the 30 days prior to the media blackout on April 23, the eleven candidates showed wildly disparate strategies on Twitter (which provides the best data). The numbers in yellow highlight are for those candidates who had the highest score. The table is ranked by the largest number of “audience impressions.” The term “impressions” is misleading as it should be more like: total potential number of people who could have seen the tweets. The essence of this column is to show off the candidates that garnered mentions by the others (i.e. word of mouth), multiplied by those people’s Twitter following. Whatever way you dice up these numbers, other than the Dupont-Aignan camp who retweeted vigorously other’s tweets, the top four candidates showed up as the top four in the final numbers on April 23. The irony of this chart? You’ll not see any yellow highlights in row #3.

Clearly, Mélenchon and Le Pen — with their more outspoken and “definitive” ideas — managed to rally much bigger audiences (see the first column) than Macron or Fillon. In terms of audience profile (whether the followers were identified as executives, students, artists, teachers, etc.), the data that Twitter provides is at best patchy. But, there were no salient distinctions other than Le Pen attracted far more health practitioners! In terms of sex, bearing in mind that there are more males on Twitter in France, I did find out something statistically interesting. In the six months up until Round 1, Marine Le Pen had quite an edge versus Macron with females (see below). Then in the intervening two weeks before Round 2, it was the reverse. Moreover, the total number of authors mentioning their candidate flopped substantially in favor of Macron. 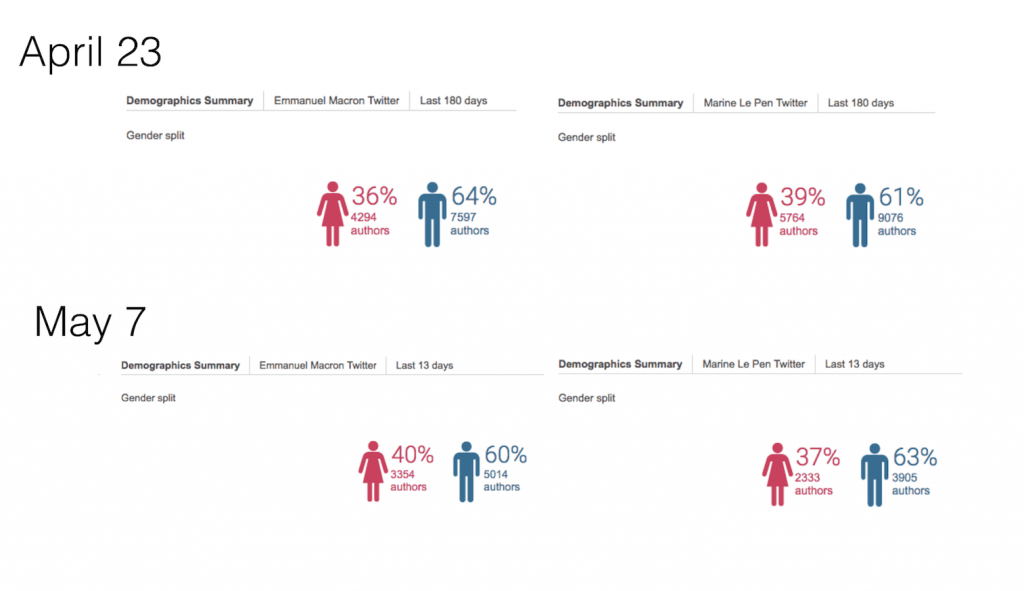 Macron & Le Pen – What of their social media management?

Just in reading my own feeds, clearly social media was a forum for much debate, discussion and encouragement. There were the inevitable rifts and virulent arguments. And, you could see the desperation mount as the final vote approached. However, ultimately, the abstention and white vote levels were quite the indictment against this presidential election.

As far as the candidates’ own social media activity, in the last two week run-off, both teams halved their daily tweet output from 31 for Le Pen and 33 for Macron to 14 and 16 respectively. My overall analysis is that social media was almost a tag-on idea for Macron. Obviously, just by the numbers on Twitter, Marine Le Pen continues to dominate, and despite the defeat, her numbers continue to rise. She leads by over half a million followers on her French account with 1.5MM followers versus 925K for Macron at time of writing. I was impressed that MLP had a Twitter account in English (28K followers), although it’s not marked as an official account. On Facebook, MLP has an almost similar lead over Macron. This would mean to me that the battle is far from over with regard to the legislative elections in June.

What’s the takeaway for Macron and his team? The younger vote is important not only because they are the ones who will be dealing longer term with the output of Macron’s five-year presidency. More importantly, the younger vote is far from his. Depending on whether he manages to galvanise their support, the mobilisation online will be increasingly powerful and potentially negative for him. And, unfortunately, it’s entirely likely that we’ll continue to see brazen and devious activities (fake news, hacks, etc.) by nation states, activists and others. He had better get onboard a good team to advise and lead his online presence quickly. Moreover, in the selection of industries on which to focus, I sincerely hope that he will provide a concerted push for the digital economy.