Have you noticed recently how many companies and leaders have been caught out for having a poor culture, bad ethics and/or a questionable leadership style? Headline companies (and CEO) over the last few years have included (but not limited to): Sony Pictures (Amy Pascal), Uber (Travis Kalanick), Wells Fargo (John Stumpf), Volkswagen (Martin Winterkorn), Sports Direct (Mike Ashley), or the less well known Bell Pottinger UK PR firm (James Henderson), RAPP ad agency/Omnicom (Alexei Orlov) or 500Startups incubator (David McClure). The consequences for the company, employee moral and stock price/valuation have been variously severe. In the case of Bell Pottinger, as a recent City AM article (UPDATED: article is now offline) describes, it has led to the company’s demise. And as this recent LinkedIn profile for David McClure attests, it’s also somewhat damaging for the individuals concerned.

If Your Company Wants To Be A Media Company, It Needs This Position Urgently Click To Tweet and it’s not just an impression. Per this Strategy+Business article: “To be sure, the number of CEOs who are forced from office for ethical lapses remains quite small: There were only 18 such cases at the world’s 2,500 largest public companies in 2016. But firings for ethical lapses have been rising as a percentage of all CEO successions.” The share of all successions attributable to ethical lapses has risen 36% from 3.9% to 5.3% over the last five years. {PWC survey}.

Why the increase in ethical “lapses”?

First of all, I would quibble with the notion of a lapse. It sounds as if such phenomena happen in a ‘moment of folly’ as opposed to a premeditated, sustained or systemic way. In one telltale if not paradoxical sign, oddly enough, CEOs who are dismissed for ethical reasons usually have a substantially longer lifespan at the helm than others departing for other reasons. In the case of McClure, the moral blindness (as the NY Times likes to qualify it) was clearly in existence since the founding in 2010 of 500Startups, if not before.

Why then would such lapses be on the rise? A Forbes article wrote that “today’s regulatory environment makes it easier to identify transgressions and bring violators to justice.” I would disagree with this being the main reason. I think it’s largely because of consumer awareness and the transparency that the Web and the Internet have provided that have brought out these miscreants. It’s not just that the digital communications provide hard, irrefutable evidence. It’s that employees and customers are increasingly demanding of better values as part of the mix of why they work at/consume one brand versus another. And, importantly, the Internet has provided many useful ways to blow the whistle without (as much of a) risk of a sanction.

Why Ethics Are Good for Business? 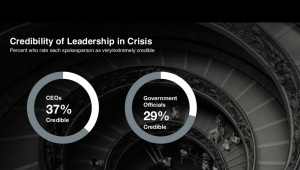 The crux of the answer to this question, Why Ethics Are Good for Business?, lies in the notion of trust. It turns out that CEOs, in general, are at an all-time low in terms of public trust. According to the 2017 Edelman Trust Barometer, just 37% of people surveyed consider CEOs credible, which is down 12% from 2016. CEOs are now barely more credible than government officials, which is quite the indictment.

The chart by country (below) is quite incriminating. Japan sits at the bottom, perhaps because of the culturally important element of honour. Meanwhile, France is second from bottom at 23% just below South Korea, which is reeling from the Samsung leadership scandal. 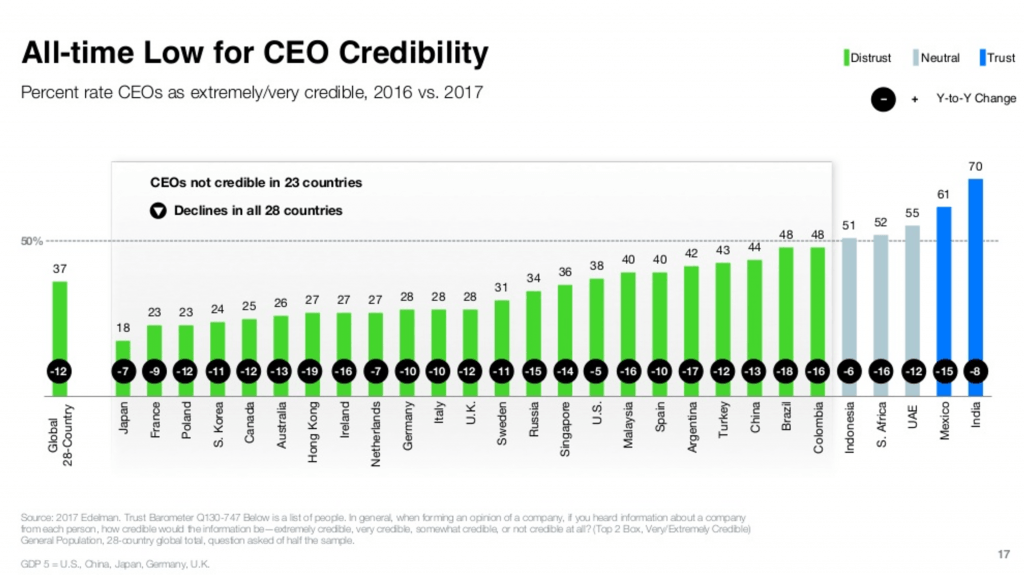 Just as a brand’s having a sense of purpose (which Stan Phelps underlined in a recent podcast) has been correlated with 10x stock returns, I am convinced that a sense of integrity — and doing business in the right manner — should equate to longer-term value. Naturally, it’s not about being totally dogmatic or more righteous than Mother Theresa. However, in terms of building trust, employee engagement and consumer enrollment, ethics are going to be an increasingly important factor in long-term success.

Operating as a media company?

The issue of ethics is further compounded by another extremely topical, if not strategic, issue: the role of media. There are two twists to this. First, we all know how difficult it has been for media companies to afford investigative bureaus. As a result, there are less journalists on the case, although they keep on uncovering cases (e.g. NYT on David McClure). Yet, there are now many more individuals and groups (read: bloggers, employees, Anonymous…) who are prepared to call out the ethical lapses and have the channels to distribute the news. Secondly, and equally strategic, many companies have themselves understood the importance of earned media as part of their marketing mix. Some companies have gone so far as to say that they have transitioned from being a product company to (more of) a media company, with the shining example being, Red Bull. As such, companies need to be operating a little more like a media company.

It’s not just a legal question

It is true that regulators are increasingly scanning for ethical irregularities, so there is a legal component to a company’s ethics. However, ethics cannot be cordoned off as just a legal or regulatory question. The challenge with ethics is that they will inevitably vary according to the sector, the cultural context and other variables. I don't believe you can regulate trust anymore than you can manufacture it. Click To Tweet Considering the reams of legal papers and the legendary retard of the regulatory process, the legal framework is bound always to be a step behind. When a CEO steps out of line, the best response should be directly in the C-suite. An environment where there is no one able to call out a CEO for an ethical ‘lapse’ is already an incriminating sign, in my opinion.

As a result of all the above, it is my contention that all companies should in fact be instituting a Director or Champion of Ethics — or depending on the level of severity, a Chief Ethics Officer. Many large companies have one, but the remit is typically not wide enough.

Just as in a media company, the Head of Ethics position would at a very minimum be to oversee that the company holds an ethical line in its media communications. However, the role would also need to look at the ethics of the company as a whole and its leadership in particular; and the entire C-suite would be accountable to this person. Importantly, this profile of this person should not just be legal.

A Stanford study by the Rock Center for Corporate Governance determined that “[A]lmost half of Americans believe CEOs should be fired (or worse) for unethical behavior.” I’m sure that public opinion has vacillated on this topic over the decades, but today it’s no longer an option. Yet, I think most of these discussions and articles miss one important point. Ethics do not start and stop at work. Ethics are deeply personal. Click To Tweet To my own stupefaction, the Stanford study reported as surprising, that the public is “critical of CEOs who engage in “immoral” personal actions.” This should not be surprising at all. If you don’t trust someone at home, why would you trust them at work?

When all is said and done, however, you can’t delegate ethics to one individual. It’s a question of values, culture and proving your integrity on a daily behavior.

Your comments and thoughts welcome.