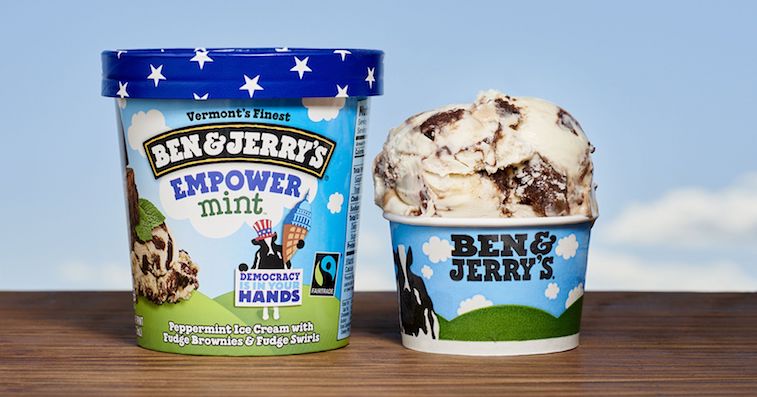 The question of whether your brand should be political is a hot topic these days. There was a great presentation I attended at SXSW 2018 by Latia Curry (from Rally) on the merits of politics in branding and how to get there. The idea of mixing politics and business, though, is hardly new. In the US, one must note that the business of politics + business is enormous, thanks in large part to the powerful lobbies. A tour of OpenSociety’s data on the lobbying business is eye-opening, if not scary. According to this 2014 article in The Nation, American University professor James Thurber estimates the annual size of the industry at around $9 billion, while OpenSociety puts the amount of lobby spend at $3.4B in 2017. Beyond lobbies, it is important to recognize that while some issues seem to be more political or politicized, the subject of politics covers a wide array of areas ranging from ethics and societal issues (down to the local community) up to constitutional questions.

To express political views as a corporation?

The Washington Post published two weeks ago an article entitled, Boycott #NRA: Hertz and Avis are the latest companies to cut ties with gun lobby as movement gains steam, written by Fred Barbash and Lindsey Bever. The article lays out how some companies are choosing to end co-branding relationships with the NRA on the heels of the student-led movement after the Florida school shooting. As much as I am for serious gun control and totally support the students, I think the topic of how businesses and brands should deal with this is a worthy and important topic. On Facebook, Jeremiah Owyang put the topic out there and provoked a good debate about whether brands should or should not be announcing their political colours. As an opening gambit, I believe that brands almost have to have a political viewpoint to the extent many brands need to tend to/observe and/or fight regulations that are legislated. And, in today’s evermore transparent world, the fact is that not having an opinion is also a choice. “If you don’t get in front of [the issues], people will do it for you,” said Curry. “The culture of staying silent needs to be broken,” Curry advocated. As Sandra Steingraber said: “Silence is the sound of money talking.” But being silent does not exactly mean staying invisible.

@ssteingraber1 “Silence is the sound of money talking.” But being silent does not exactly mean staying invisible. #activism #politicalAF

If customer centricity is all the rage (“the customer is king”), it stands to reason that one would always want to “listen” to what your customer says. But should a brand also tend to its customers’ political opinions and/or politically-charged requests? The First National Bank of Omaha announced that “Customer feedback has caused us to review our relationship with the NRA.” However, should one be catering to customer feedback about political topics? As David Armano at Edelman wrote about the Activist Economy, “On the cultural front—consumers are not only empowered to behave as activists thanks to social media—they are now polarized and motivated to do so and no brand is immune.” Yet, the fact that consumers (i.e. clients and potential clients) are politically charged and able to communicate does not immediately mean that brands should follow suit.

Being overtly political as a corporation is a slippery road to take. Listening to customer feedback is only a portion of the input. There are many other key stakeholders, including, importantly, your employee base and the shareholder…. It is my conviction that one ought to take care of and listen to first and foremost your internal employees. Just as with espousing a higher purpose or mission needs first to be believed and lived by the staff, being political has a far deeper relevance and impact on the employee than for a customer.

Activism by shareholders is generally limited to the extraction of financially quantifiable value. Political activism by shareholders or investing with political motivation has generally been reserved to organizations such as university trusts, NGOs, associations and lobbies. However, if/once the stock market starts to believe that companies with an ethical backbone and a political inclination will bear higher returns, then one will surely see far more companies following on. And it’s not out of the world of possibilities since we’ve seen that the world’s largest asset manager, Black Rock, has waded into the fray in its leadership role. (See Reuters article). Moreover, Blackstone Group, one of the investing behemoths wrote an urgent email asking its external fund managers to identify holdings in companies that make or sell guns. (See WSJ article). Not that such a move indicates that Blackstone has suddenly become missionary, but it is part of an evident shift in corporate governance requirements. In the case of the mass shootings in the US and the tendentious issue of gun controls, if a fund has an investment in a gun-related business, this is tantamount to holding a political position. Moreover, being more purpose-led may also be good for the wallet. An HBR article, published in 2013, indicated that brands with purpose (so called “firms of endearment”) provided significantly higher returns than the general stock market. Eighteen of the 28 conscious companies studied were publicly traded, enabling them to compare returns. From 1996-2011, these 18 companies provided 10.5x higher returns versus the S&P500 over the same period. As indicated above, companies will have increasing difficulty hiding from the issue. Even if it is not being vocalized, therein lies a pregnant question: if you don’t directly say you’re against some vile act, you might be considered as silently endorsing it. 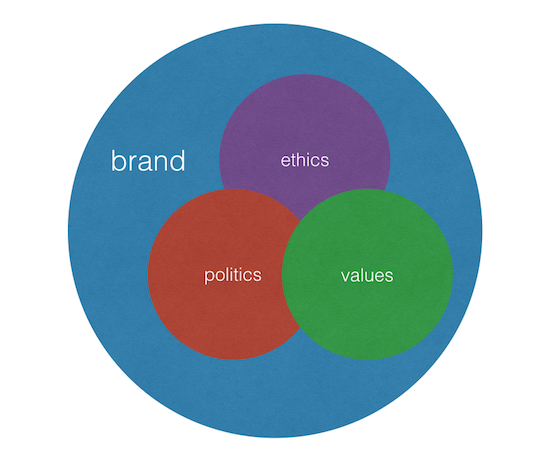 So, how does a company go about “being” political, especially when it has not had a history of doing so in the past? There are innumerable challenges, including which issues to choose, which side of which issues, what scope and scale? Part of the risk is doing so just because it “sounds good” to do. If your company is essentially local, it is a distinctly different question than a national or internationally distributed brand. In Curry’s presentation, whereas most of the press tends to focus on big companies, she referred to one case of a small company being political. As a local company, it would make sense to weigh in essentially to locally relevant issues. But, whatever path taken, it must be trod with great care and thoughtful preparation for the long-term, all the more so because it will inevitably require being fast to express an opinion whenever the issue boils up. At some level, when fully incarnated, you want the expression to almost be a natural reflex. Political statements that are not backed by substantive actions are more than likely to be negatively perceived as something tantamount to “cause washing.”

The five steps to take

In terms of establishing your political line (e.g. if you have not had one before), I have five steps that I believe need to be taken:

When not to be political?

Certainly, I do not believe all companies and brands must be political. This is because many companies have other areas to fix first. For example, they may (a) be too wrapped in themselves and their authenticity/integrity would be too quickly called into question; (b) have many skeletons in the closet that need to be dealt with first; (c) not have a senior team that is prepared to walk the talk; (d) have other basic issues to fix (e.g. product failures, delivery challenges, etc.); or (e) have yet to work out who they are (i.e. brand mission and values).

In short, I don’t believe that a company must be political or that it is wise to run headfirst into espousing a political agenda. But when your brand is strong and has a de facto set of values, it is not only easier to do so, but it is likely the better course of action. When done with good intention and conviction, it will broaden your company’s purpose beyond shareholder value and help foster greater engagement among the workforce. When well managed, especially with an audience that is currently under 40 years old (e.g. “millennials” and younger), the brand will likely help gain greater advocacy among external stakeholders and customers. But, whatever you do, brand politics must be a long-term play and the playbook will constantly need revisiting.

Your thoughts and reactions are welcome!