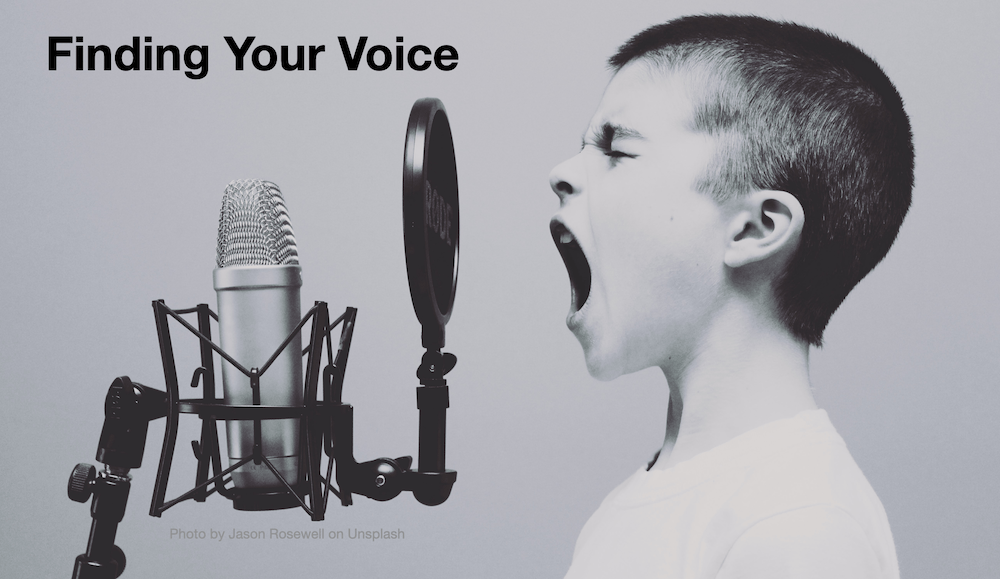 As a speaker, I’ve been working hard to refine my “voice.” The challenge is in making the content and the form consistent and congruent with who I am. In an audio-infused world, finding your voice is now a first-degree question. What voice should you as a business leader — and as a brand — have when you’re speaking on or from a stage, whether it’s a podcast, radio, Zoom or even social media channels? I’ve already written about the surge in audio, with the newest kid on the block, Clubhouse, looking to pierce through. In any event, having discussed with many radio personalities and podcast enthusiasts, there’s definitely something special about the audio-only channel. It may be a question of age, too, but there are plenty of times where I absolutely prefer just to have a POTS audio telephone call as opposed to the video Facetime or Zoom. It’s not just that you don’t have to put on your face (mask, make-up or not) for the call, it’s that you can focus on the message through the sole medium of the voice.

In many of the books I’ve read recently, I’ve see over and over again a focus on the need to be an authentic and best version of yourself. In just the last few months, including in French, I’ve read about ten books whose central tenet is about the need to know yourself better and to be yourself. I cite among others two recent books, Donald James’ Manners Will Take You Where Brains and Money Won’t or Sophie Peters‘ Le Plaisir d’Etre Soi (or The Pleasure to Be Yourself in French). Whether from the angle of psychology, sociology, society or as a professional, there’s a convergence on the notion that being your authentic self is vital to fulfilment … and, as I underscore in my book, You Lead, to performance as well.

Ever had that feeling that your voice is several notes higher than it normally is? It’s generally because you’re nervous and your vocal cords are tight. You’re probably also find that you’re speaking faster than you need to. I remember times when I’d almost have an out-of-body experience, looking at myself from afar motoring on. Not only did I feel self-conscious and uncomfortable, it was as if things were out of control. More often than not, what was happening to me was that I was I unsure of myself. I was talking about something that I didn’t fully master. Worse, I might have been talking something in which I didn’t believe. I certainly had not found my voice.

When we talk about finding one’s voice, it is nominally about having a consistent expression. But, to be effective over the long haul, the only real answer is when your voice is yourself. This may sound obvious. But, it’s far from an evidence for most people. To wit, the high levels of unhappiness and disengagement, especially at work. When you have found your voice, there is a more natural lilt and tone. The words come to you with ease. You’re not afraid of the gaps or silence, because you are still communicating via non-verbal cues. Your voice is the expression of YOU in both form and in content.

Have You Found Your Voice? via @mdial Your voice is the expression of YOU in both form and in content. #voice #brand #youlead Click To Tweet

Being yourself increases conviction

When you have eased into that space where you master your topic and you believe in your message in a profound manner, where you’re inhabited by purpose and you know why it’s important in a bigger context, then you can say that you have found your voice. I certainly feel that today, but it was a journey and it took a long time to sculpt myself. What happens is that, not only do I not need to search for words, I feel them and almost anticipate them as they form in my brain. My confidence breeds conviction. Naturally, my words and convictions may not be for everyone, but that’s okay. In fact, it’s part of the process. If I’m trying to be all things to all people, I am no one. If I’m trying to please everyone, I am pleasing nobody. But when you’ve found your voice, your message carries greater conviction and is more persuasive.

How does a brand find its voice?

As a sole trader and speaker, finding my own voice is tantamount to giving my brand a voice. It’s about personal branding. And my brand is personal. The challenge becomes finding a voice as a group of individuals, members of a company. How does a brand find its voice? This is no mean feat and is so vitally important when it comes to the multitude of ways that we can now communicate and interact among ourselves and with our stakeholders. Whereas corporate communications in the twentieth century were essentially one-way and limited to specific channels (advertising etc), we’ve now got many ways to interact, with many individuals within the company interacting — and interfacing — with stakeholders. Of course, it’s not just the audio, but the text and the visual. And, importantly, your brand becomes what others are saying about you. What, then, is the voice of the company or brand and how to find it?

Finding and sharing a common purpose

There’s no easy answer, but it lies in connecting everyone in the organization to a history, a context and a common purpose. In one of my podcast interviews (in French) with fleet-footed French international, Denis Charvet, who represented France against the All Blacks in the first ever World Cup Final in 1987 (among other matches), he talked about how representing his country was an immediate and unifying cause for all his teammates, many of whom previously were sworn enemies of his regular club. Everyone on the national team were connected to the history and the cause, which meant that each, while a star in his own right, had to drop his ego and bond with each other. Lee Mears talked about the same feeling when playing for the vaunted Lions. In business, it’s different and generally a more difficult task because the cause needs to be made explicit and decoupled from the bottom line. For starters, we still have too many egos which means, when top executives speak, it’s about them, not the cause. Businesses all too frequently don’t have a higher purpose than padding the bottom line and meeting short-term objectives. Their raison d’être is often limited to making great products and/or, somewhat more nobly, focused on the customer. But that’s not sufficient. Executive teams typically don’t share sense of doing something bigger, where what we do serves a higher common good and is what I call inside-out. As I wrote in You Lead, in the case of Redken, the professional haircare brand I had the privilege of running, our purpose spoke to and was lived by the employees of Redken and by the stakeholders throughout the value chain. Earning a better living and living a better life was designed to be experienced by our core employees, through our educators, distributors and hairdresser clients.

Once you establish your #purpose, you need to vigilantly keep telling the story, recruiting with intention, adapting to the channels and correcting course whenever necessary. By @mdial Click To Tweet

A first port of call for your brand is to check out what is your purpose? There’s no point in having a purpose that is unreasonable or implausible. Once you establish that de facto purpose, you need to vigilantly keep telling the story, recruiting with intention, adapting to the channels, and correcting course whenever necessary. It’s a journey, though, and it’s never going to be a straight road. You need to allow individuals to have agency; to feel that, by knowing and being themselves, they are contributing to, and are at the service of, the bigger common purpose. When everyone knows that purpose and connects into it at a personal level, then you’ll trust the system rather than rely on strict processes and protocols. It’s about allowing each to have the freedom to express themselves in order to achieve your goals and fulfil your purpose. Your brand voice is formed as a collective. That’s when you have true engagement at the individual level, which converts to an authentic and consistent voice on the outside. This is when you know your brand has found its voice. And that’s when others, such as your customers, recognize and are attracted to that voice. Your voice will stand a cut above because it’s more consistent and more authentic. It’s not about being ‘nicer’ or ‘sweeter,’ it’s about more real and valued.

Are you ready to put your voice out there?