State of the Spam Business

How many legitimate (non junk or spam) emails do you receive in your inbox? 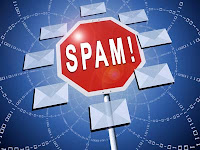 It may come as a surprise to you that only 3% of the world’s supply of emails are legitimate, at least that’s what a recent Microsoft survey says. On a personal level, I know that I have a spam-to-legit ratio that is more like 1:6, aided by (a) the never ending screening and hunting down of phoney addresses and cyber pirates by the various governing bodies; (b) the individual mail filters (I use hotmail mostly) which appear to direct with about 80% accuracy true junk into the junk folder; and (c) my attempting not to leave my email address in public spaces that are too easy for email bots to trawl and discover. In any event, in a recent BBC article regarding a recent Microsoft security report, “[m]ore than 97% of all e-mails sent over the net are unwanted… The e-mails are dominated by spam adverts for drugs [nearly 50%], and general product pitches and often have malicious attachments.” Other industry reports have the volume of junk mail somewhere between 75% and 90%, so this latest number takes the morass of spam to even higher levels.

A second source for spam information is the monthly Symantec State of Spam report (PDF – April 2009). According to the Symantec report, in March, the spam coming from the US accounted for 28% of the world’s supply (up from 25% in February and 23% in January). Coming in second, Brazil accounts for 9%, while India at 3rd fell back to 4%. South Korea leads the Far Eastern countries at 4%, ahead of Turkey, Russia and China (all 3%). Below is the chart courtesy of Symantec. Latin America is responsible for a quite surprising 15% of the total. As far as I was concerned, it seems that half of my spam relates to winning the jackpot and inheriting some African fortune, so I was surprised not find Nigeria up in there in the top 10. 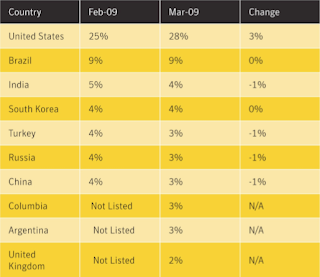 “The [Microsoft] report found that the global ratio of infected machines was 8.6 for every 1,000 uninfected machines.” I would suspect that Mac gets a less than market share representation…fortunately for us Mac users.

The only good news, if you read on in the BBC report, is that malicious software (aka malware) must increasingly be adapted country to country (see world map of malware levels), which diminishes the odds of an Armageddon style worldwide malware. The article states, “[a]s the malware ecosystem becomes more reliant on social engineering, threats worldwide have become more dependent on language and cultural factors,” [the Microsoft study] reported. In China, several malicious web browser modifiers are common, while in Brazil, malware that targets users of online banks is more widespread.”

In terms of where the malicious software is most prevalent, “the [Microsoft] report, which looked at online activity during the second half of 2008, also pinpoints…[that] Russia and Brazil top the global chart of infections, followed by Turkey and Serbia and Montenegro.”

On another level, from a report out in March 2009, I read about how much spam is said to pollute our world… A Carbon Footprint study from McAfee says that spam generates greenhouse gas (GHG — aka Carbon Dioxide or CO2) equivalent to 3.1 million passenger cars. This report says that “the energy [33 billion KWh] consumed in transmitting and deleting spam is equivalent to the electricity used in 2.4 million U.S. homes.” I love the notion of the life cycle of spam! If you want to download the McAfee PDF report, do so here. Another feature in the McAfee report is the estimated loss in productivity caused by spam: “If you have 1,000 workers earning $30 per hour, your company will suffer $182,500 per year in lost productivity.” It is very crafty to propose an ROI on their anti-spam software.

In any event, as I indicated in a prior post TV5 from Québec, Canada, there are also the unwanted communications from companies where you can no longer unsubscribe to their newsletters, as is the case with TV5. Another one on my can’t-get-rid-of-them list is www.seek-blog.com.  No way to unsubscribe.  I suspect such mail should be considered spam along with the other 97%! On the other end of the scale, kudos to Nick @ NickOnWine for sending out regular subscriber updates.

Like mosquitoes, I can think of absolutely nothing beneficial from spam. After the ERACE ‘EM Campaign (the Eternal Radical and Complete Extermination of Every Mosquito), comes the EAT SPAM Campaign, Eradicate All Toxic Spam. Sign up here!