Taking a step back recently, I tried to think of all the industries that have been radically transformed by the tsunami of the Internet. Internet has a way of altering the way of the land in many different ways because, fundamentally, it changes the way we all communicate.  The immediacy, mobility and multiway channels of the “new” communication is a powerful combination — especially since the cost is relatively minimal.  Perhaps, the harder task would be to identify which businesses will not be significantly impacted. However, if the Internet does not get them, I have a feeling that the arrival of other new technologies (miniaturisation, RFID, etc.), changes in societal values and consumption habits, or the effects of global warming or terrorism will cause equally large changes in those industries as yet untouched by the Internet alone.

To this end, I have compiled a far-from-comprehensive list of sectors, industries and businesses that have been rocked by the Internet. I think the list, ultimately, will include absolutely every industry.  If only in search of cost savings, new forms of internal communications or a change in the marketing mechanics, all industries will be impacted in one way or another by the internet.  While the terminology in this analysis tends to be “negative,” using rose-tinted glasses, the situation is riveting, exciting and potentially explosive for those companies within each industry which manage to capture the wave and surf on the opportunities.

I have categorised the list into three different areas: media, other goods & services, and the dark side.  I thought it would be fun to speculate about how much each industry has been hit to-date (up to 5*), and then to consider what other collateral ‘damage’ has or will occur due to the relative revolution in the said industry. I then cite an emblematic player who has typically been benefiting from the paradigm shifts. Finally, I have dropped in a pithy statement on the future prospects for that industry.

As a matter of principle, I have not systematically cited the usual list of suspects of winners (Google, Yahoo, Facebook, Apple, etc…) that will all benefit from the ongoing surge in internet users (now at over 1.8 billion people, of which more than 600 million are now doing so from their mobile). This post is not intended to be academic, nor complete. It is merely an opportunity to take a step back and consider the wonderful opportunities that lie ahead.

The first list concerns the media industries which have systematically been on the front line — a normal state of affairs considering the Internet is not just a new media, but all media in one. 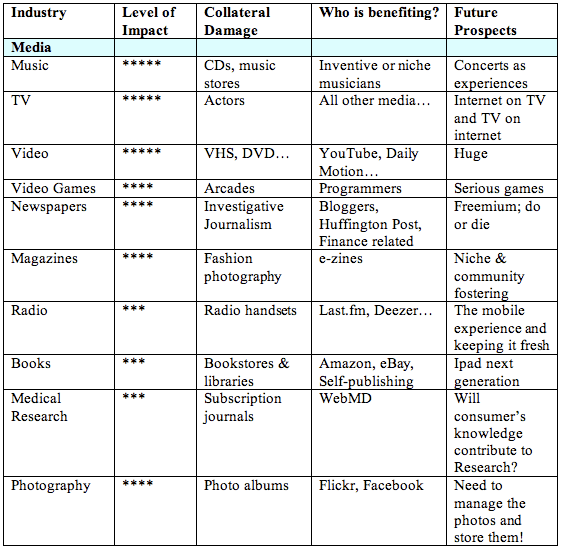 The media industries under flux

Other than the media industries, herewith is a list of some other industries of goods and services under the same analysis.  There are obviously many missing.  For example, all the computer hardware and software suppliers or Politics.  I have written in the past about the impact in the political spheres with the opportunity for anonymity as well as the strong demand for transparency.  All political campaigns going forward will have more than just talking heads, but tweeting heads and blogging buddies.  Anyway, here is a sampling… with just a couple of b2b industries (which in many cases have actually been faster to take on social media than b2c companies).

Some other industries (other than media) hit by the internet

And, then there are some less conspicuous industries — which bear witness to a darker side of the human being — that are also being revolutionised.  And, I could probably add a few more, such as sex toys, prostitution rings and terrorism…

What industries are cruelly missing from this analysis?  How far off base did you find some of the commentary?  I will be glad to hear your thoughts?