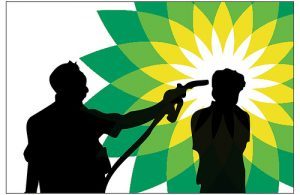 The calamity of the Gulf of Mexico does not need one more person (me) to harangue BP.  They are surely paying the BIG price as it is.  But, in terms of crisis management, I do not believe the history books or case studies will be particularly kind to BP.  In several respects, BP is a perfect example of what not to do. (a) In times of crisis, do not come rushing out with wrong or inconsistent information. Facts trump opinions.  (b) Words matter (“I’d like my life back” or “we care about the small people”), although acts matter more — and here the actions are up against expectations. (c) Without an experienced social media culture, trying to ‘use’ social media will at best be neutral and can backfire.  This post is a review and analysis of BP’s social media PR efforts.

BP has rolled out the social media PR machine, but while they have thrown a large net and generated a lot of content, there is little traction and very little engagement with the community.  Here is a quick look at what is happening on the social media front.

Facebook.  BP has launched a Facebook fan page BP America which has managed to get 33,500 fans who say they like it.  The conversation is pretty much one-way.  The company posts an update and the “fans” rant and rave.  There is no dialogue; BP does not participate in the commentary.  They are sitting back and taking it.  But that BP America fan page is a pretty mild arena considering the spawning of anti-BP sites, namely Boycott BP with 770,000 fans and a far more virulent tone.  Then there are myriad other sites, such as “Stop the Oil Spill” (330K) or “I Hate BP” (10K+) with many thousands of other irate fans.  Since BP has not engaged in the conversation, but has decided to broadcast in a one-way communication, I do not see BP making any positive headway.

Twitter.  The picture is similar on Twitter where a faux account “BP Global PR” has 182K followers, more than 10x the official twitter account BP_America which has a paltry 16K (despite a much higher output of tweets).  The faux account has caught on for its satirical, scathing tweets.  The major problem from a crisis management point is that BP took seven days to start tweeting about the unfolding catastrophe, a virtual century in a social media timeline.

YouTube.  BP has created their own channel. But, the action is elsewhere on YouTube, namely this spoof video which has caught on like wildfire with 8.6 million views so far.  And there are several other spoofs out there (see here for a list).

Flickr: BP posts their photos of the clean up on a ‘pro site‘. There is virtually no commentary or dialogue going on here, so I am not sure what the benefit is other than to populate Google Images.

Meanwhile, BP’s official site, which has a Google PR 8 and an Alexa ranking of 2328, has a special tab entitled “Gulf of Mexico Response.”  The site has a mountain of material.  There is even now a livestream of the oil gushing out.  Unfortunately, it is clinically clean and there is no dialogue, even on the blog postings.

Moral of the story: First, as slick as the rolled out presence online appears, if you want to create an effective social media presence, get ready to engage.  You can’t just gush out black text and listen to see if it’s working.  In the end of the day, of course, at this point no amount of social media or classic PR can help until the leak is plugged. Secondly, it is very difficult to ramp up a social media presence if it does not exist ahead of time.  If you don’t have a social media “culture” inside the company, I highly recommend getting one started BEFORE an emergency comes crashing down ‘out of the blue.’  Thirdly, while I can applaud BP’s efforts to use a host of different channels, they were not quick enough to come to the table and they are not taking true advantage of the opportunities available to them.  Ultimately, this will mean a lot of spinning of wheels to small effect during this crisis.  I have no doubt that the surviving BP, having now been plunged into a social media storm, will have learned many viable lessons for the future (the same way DELL had to, for example).

Update on 7 July 2010: I discovered, via an On The Record podcast, that BP also has two other communication vehicles:  an email subscription (26,000 subscribers as of early June) and text messages (4,000 subscribers for alerts).  With all the above social media, that makes for a lot of different communications to organise, approve and dispatch every time they have a new piece of information to transmit.

Update on 22 July 2010: From bad to ugly, BP’s PR has moved from Public Relations to Photo Retouching.  Caught with their hands on the photoshop retouching cookie jar, John Aravosis on AmericaBlogNews gives a blow by blow account of the error in transparency committed by BP.  Apparently, this is an innocuous retouch — with no malicious intent.  However, it just shows how important transparency has become. Being opaque on one angle can obscure the image from another… literally.  The saga continues.  Companies need to get themselves prepared for the greater level of transparency, as there are many [customer] eyeballs now not just watching, but participating in the happening.  The outpouring in the comments section on ABN (Googe PageRank 7, 54K on Alexa) is quite strong — and, therefore, likely to stay highly visible on the web for quite a long time — just like the impact of the oil spill, I suspect.