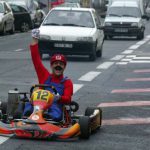 Not heard of Rémi Gaillard? If so, the chances are that is because you still only believe in mainstream media (MSM), i.e. you watch television, read newspapers and surf only the established sources on line.

Rémi happens to be the most watched humorist in the world — and that is ONLY on line. A comedian-hooligan-prankster from Montpellier, France, Rémi is a rampantly anti-mainstream media comedian.   But, he definitely has the internet working for him.

You can see more from the collection of videos on his  www.nimportequi.com (PageRank 6, Alexa ranking 1665).  If his URL is in French, you certainly don’t need to understand French to understand these videos and his site is multilingual.   His slogan: it’s by doing just about anything, that you can become just about anyone.   And, over the course of the last 10 years, he has become quite the celebrity in so doing. His videos have amassed a collective 745 million views so far (and counting).   ANY media company would positively salivate at having so much.   However, he does not have any MSM deals…

For squash lovers (thanks Ash!), you might enjoy this silly video from Rémi. Overlooking his squash talents, he brings a new dimension to thinking inside the box.

This little video has 2.7 million views as of this day. Another fact about Rémi: his Facebook page was launched by a friend as a prank in January 2010, with the prompt: If I get a million fans, I will present myself as a candidate for the 2012 Presidential elections in France (a tip of the hat to the famed French comedian Colluche). As of today, the FB page has over 2.2 million fans.  He has stated his only purpose will be to encourage people to vote and that he will not enter into politics… but the temptation is there!  His YouTube Channel is well subscribed as well with 368K subs.  A sign that Twitter is still slow in France, he has less than 1000 followers on Twitter @nqtv.

The moral of the story is that humor and video go very well together on the internet.  How he turns that into a living is not too hard to imagine (read: LG deal).  How he turns himself into a mega-billionaire (if that is what he aspires to) is a bigger challenge as it will require talking with some of the institutional folk he has so overtly shrugged off.